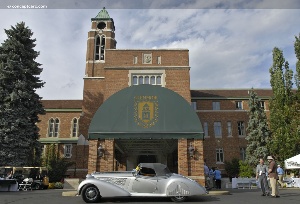 November 2008
For over a decade, the Glenmoor Country Club of Canton, Ohio has played host to the 'Glenmoor Gathering of Significant Automobiles.' It is a breath-taking location with 381 acres of well manicured greenery, a par 72 championship Jack Nicklaus Signature Golf Course, world-class European Health Spa and fitness facilities, Olympic-size swimming pool, tennis courts and a beauty salon. A long and elegant driveway leads visitors to the clubhouse, a 167,000 square foot Gothic-style building that is as inviting as it is impressive. Located behind the building is the golf course and the location for the Concours d'Elegance.

'When life gives you lemons, make lemonade.' This popular phrase typically means when life deals something sour, turn it sweet or to make the best of a poor situation. This is what the organizers of this years Glenmoor Gathering were faced with when rain on Friday and Saturday made their picturesque golf course show field impossible to drive upon on Sunday. So, organizers looked to the front of the clubhouse, trading greenery for concrete. With precious little time, the driveway and two adjacent parking lots became the new location for the event.

This year's event celebrated GM's Centennial, sixty years of the Porsche Sports-Car Company, and the Ford Model T. With nearly 30 classes, the selection was very diverse covering the vintage to the exotic, from motorcycles to customs, and from concepts to muscle cars. Though the rain had scared away several scheduled exhibitors, the classes were well fielded and the new show location was more than adequate to provide the necessary real-estate required to house these masterpieces.

Additional Activities
In the front of the clubhouse were two very special concept cars, the 2003 Cadillac Sixteen and a 1978 Equus. The Equus was the last concept car designed for Vauxhall under the auspices of Wayne Cherry, then head of European design for General Motors. Vauxhall did not resume producing show cars again until 2003. The Cadillac Sixteen Concept is powered by a 13.6-liter engine and features fuel-saving Displacement on Demand technology which shuts down half of the cylinders during most driving conditions. The engine produces 1000 horsepower and 1000 lbs.-ft of torque. It still remains a concept, though the Displacement on Demand can be found in many of General Motors vehicles.

Located behind the clubhouse and arranged along the golf cart path were a variety of rare world-class performance cars. The list included the usual suspects such as Ferrari, Lamborghini, BMW, Lotus, Saleen, DeTomaso, and Bugatti. These were very popular by many spectators throughout the day and received much attention. Located nearby was the Canadian Model T Assembly Team. In a matter of minutes, the skilled team worked in harmony as they transformed an assortment of automotive parts into a workable Model T. The Fine Art Exhibit was moved from their usual outdoor tent venue, into the club house where several rooms were transformed into galleries.

100 Years of the General
Honoring the legacy of General Motors is difficult, as their credentials are vast and cover a wide spectrum of the automotive industry. They have been at the forefront of design and technology throughout their existence and have evolved into the world's largest automaker. William Durant, the company's founder, realized that cars, and not carriages were the future. When GM was formed, it was a holding company for Buick. Later in the year, the company acquired Oldsmobile, then Cadillac, Oakland and Elmore. In the category 'Early Years of GM', an Elmore Model 30 was in attendance. It is a very rare automobile as production was low throughout the company's entire existence. 1907 was their largest production year, with 400 vehicles being built. The Model 30 in attendance was powered by a three-cylinder motor that offered 24 horsepower. In 1909, the Elmore Company was acquired by General Motors for a reported $500,000. A few years later, in 1912, production of the Elmore ceased.

In the late 1920s, General Motors introduced a new brand, the LaSalle, to fill the gap between Buick and Cadillac. It was designed by Harley Earl, who later became head of the newly created Art & Colour Studio. The LaSalle is often regarded as the beginning of modern American automotive styling and was designed to be a smaller alternative to the larger Cadillacs, yet retain the elegance and style. They were offered with a full-range of body styles, including Fisher and Fleetwood custom designs. Among the other vehicles in the 'Golden Era' category was a 1939 LaSalle Series 50. Production of the LaSalle automobiles would end a year later, in 1940. The judges were impressed with the convertible coupe and chose it as their 'Best in Class'.

The 'Postwar Era' Category encompassed nearly two decades of the General's existence, with such iconic names as the Chevy Bel Air, Impala, and the GTO. The design changes were drastic during this period of history, as were the increases in horsepower. During the mid-1960s, much of the industry was concentrating on their full size lines; Pontiac saw an opportunity for an intermediate vehicle powered by a big block engine. Thus, the birth of the legendary Pontiac GTO and what is wildly considered as the start of the muscle car era. An original 1966 Pontiac GTO Coupe was chosen as 'Best in Class' at this year's Glenmoor Concours.

Sixty Years of Porsche
The Porsche category was particularly interesting as it housed several cars that were void of the Porsche nameplate. Since the career of Ferdinand Porsche encompassed more than his marque, vehicles in which he influenced where invited. The list included an Austro-Daimler from the mid-1920s; Dr. Ferdinand Porsche was chief engineer and director of the company from 1906 through 1925. He was responsible for the design of all of their fine automobiles including race cars and the 167 ADV Dual Cowl Phaeton on display.

Sitting amongst the tree line was a rather interesting vehicle, the Paxton Phoenix. It was a vehicle designed by Brooks Stevens and powered by a rear-mounted Porsche engine taken directly from a 356. It was a workable one-off prototype used to demonstrate to investors and to engineering staff all aspects of the working automobile.

Ten years after the end of WWII, the German government solicited all of the manufacturers for a proposal for a military, light utility vehicle. The Type 597 was Porsche's proposal. It featured many pioneering engineering features such as shift on the fly four wheel drive, five forward gears and it was truly amphibious. Unfortunately, all of these things came at a cost and the German government chose to go with the very basic and cheap alternative proposed by DKW, the Munga.

After being turned down by the Germans, Porsche marketed this vehicle to the various NATO countries without success. As a last resort, they badged it as the Jagdwagen (Hunting Car) and tried to market to outdoorsmen and sporting people. Again, the cost of the vehicle was too high and the market too small to bring success. As a result, a total of 71 Type 597's were made, all in prototype stage with no two exactly alike. With so few examples ever created, it was a delight to see one at this year's event.

The Awards
The judging at Glenmoor puts emphasis on a car's significance, engineering, elegance, design innovation and fabrication. In each class there is one top award and up to two awards of distinction. Several other special awards are presented in a plethora of categories, including 'Peoples Choice' and the coveted 'Best of Show'. Each award is presented during a narrated drive-through with informative commentary by automobile experts while each vehicle is shown in turn.

The CCCA Classic 'Best in Class' went to a very deserving 1934 Packard Twelve Touring car that was purchased new by the City of New York and used as a parade car for such dignitaries as President Franklin D. Roosevelt, the Mayor of New York, Fiorello LaGuardia, the World Champion New York Yankees and other dignitaries of the era. The 'Best Original Car' went to a very rare Minerva AK Weymann club sedan D'letern that is completely original and has been driven only 7,000 miles since new. The Minervas were popular with European royal families and were among the most expensive cars in the world. The Volunteers selected a 1935 Packard Coupe Roadster as their favorite; the Grand Marshal was in favor of the 1930 Cord L-29 Brooks Stevens Speedster; the chairman chose a 1955 Porsche Continental. With over 200 vehicles from which to select, the people chose the one-of-a-kind Aerodynamic Martin 100 Prototype built by Martin Aircraft Company of Garden City, New York in 1925. It is one of three prototypes built and the only survivor. It was, perhaps, the most unusual car in attendance at this year's event.

Though it is generally difficult to guess which car the judges might select as 'Best of Show', this year's selection was rather easy. Top honors went to a car that has a history of winning; it was the Best of Show at the 2004 Pebble Beach Concours d'Elegance and has several significant class and overall wins at venues such as Amelia Island and Meadow Brook Concours. It wears coachwork by Erdmann & Rossi, was given a recent 12,000 hour professional restoration, and rides on a 'short' 135-inch platform. The car is a Horch 853 Roadster owned by Judge Joseph Cassini of West Orange, N.J. It was a well deserved victory.

Conclusion
Mother Nature brought her best, but it was not enough to slow the 14th edition of the Glenmoor Gathering Concours d'Elegance. This world class event had an impressive array of vehicles, many family-based activities, and one of their largest visitor turn-outs to-date. The success of this event is due to location, a dedicated and seasoned staff, a long list of qualified judges, and many top collectors. Many of the judges are published authors, historians, editors at well-known magazines, presidents of car clubs, collectors, designers, and restorers. This pedigree guarantees that quality cars will be recognized for their greatness.

The location is beautiful and has the added benefit of being in close proximity to several major museums, such as the Canton Classic Car Museum, National Packard Museum, and the Crawford Auto-Aviation Museum. Slightly farther north and into the Michigan area, there is the Gilmore Car Museum, GM Heritage Center, Walter P. Chrysler Museum, and the Henry Ford. Neighboring Ohio to the West is Indiana, home of the Auburn-Cord-Duesenberg Museum, among several other great collections. Many of these museums and collections have brought vehicles over the years and have helped make this event special.

Next year's event is scheduled to honor one of the unsung heros of the American automobile industry. The theme will be 'The Automobiles of Edsel Ford.' Mr. Ford's biographer, Henry Dominguez, is also scheduled to attend.
Galleries
Class A - 1918 and Earlier 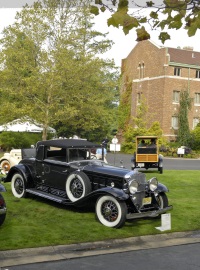