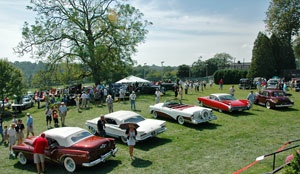 September 2008
The 100 Motor Cars of Radnor Hunt Concours d'Elegance is an assemblage of 100 of some of the world's finest automobiles. The list of cars covers a very broad spectrum, ranging from antiques and classics, to muscle cars and modern supercars. This year's event honored the Art and Colour of General Motors, Italian coach builder Zagato and sporting and race bikes from BSA Motorcycles. All of the vehicles in attendance are by invitation only, are very rare, and are truly worthy of the recognition bestowed upon them by this world class show.

GM
GM was certainly the star of the show with many examples on display from their long history. The list included the eye-catching Motorama cars, the legendary V16 masterpieces, and some very early racing cars. From 1930 through 1960, the 'General' was the largest manufacturer in the world. They are leaders in automobile design and have a history of breaking new ground with elegant designs and unrivaled engineering. The revolutionary V16 engine, the work of engineer Owen Nacker, was smooth and powerful and when bodied by such greats as Fleetwood, became the new pinnacle for luxury.

Near the close of the 1930s, under the direction of chief designer Harley Earl, the world was introduced to the first concept car, the Buick Y-Job. It would be the first of many 'dream cars' to follow. During the early 1950s, GM displayed a selection of these cars throughout the country in their Motorama shows. These cars introduced new technology and showcased new designs. At Radnor, there were two very special and rare show cars, the Chevrolet Corvette EX-122 prototype and a Buick Roadmaster Prototype. The Roadmaster appeared to be stock, but was in fact a one-off prototype built for the Motorama.

Even though many of the Motorama cars were discarded and scrapped after their touring days had ended, the Corvette prototype was retained by GM's engineering department and later used as a test bed for the new V-8 that would see production in 1955. The Corvette Prototype was not the only Vette on the field; it was joined by at least ten others that included examples from the C1, C2, and the C3 Series. A few were race cars, all were rare, and the most alluring had to be the one with the Italian heritage. A very unique coupe was created by the famous Italian coachbuilder Pininfarina and based on the new Corvette Sting Ray. This fabulous one-off Corvette was kept by Pininfarina for over 40 years and displayed in their lobby.

Zagato
Ugo Zagato formed the Zagao Company at the end of World War I. The vehicles created by this newly formed company quickly generated a reputation for lightweight design and excellent aerodynamics. The examples invited to this year's Radnor Hunt Concours spanned four decades, with the earliest example being the 1930 Alfa Romeo 1750 GS Roadster, which won a 'Radnor Award'. The Class Winner was the Fiat Abarth Record Monza owned by Don Meluzio.

The Awards
Judging at the Radnor Hunt Concours is very different from most other events. Where other shows often focus on period correctness, quality of restoration, or event perfection, the focus at Radnor is on design, presence, provenance and the enduring aura of quality. To win top honors at this event, the car must have timeless presence and be a stunning work of art. Perhaps one the most captivating and inspiring coachbuilders was the work produced by Figoni & Falaschi. For the past two years, cars that wore their coachwork have rolled away with Best of Show honors. When a Figoni bodied car made its entrance onto the show field this year, many wondered if the judges would pick it as their favorite.

Before the Best of Show was announced, the people had to make their selection for their favorite. The Peoples' Choice award went to the 1914 Ford Model T owned by Norman & Linda Hutton. A fitting award as the Model T is considered by many as the most influential car of the 20th century. Over 15 million were produced during their lifespan, lasting from 1908 until 1927, making 2008 the centennial of this automobile.

The Chairman's Award, selected by the chairman Michael G. Tillson III, went to the 1969 Chevy Camaro. Considering the cars on the field, the Camaro was one of the more common. True to form, the selection committee hadn't selected just any Camaro; they invited a very unique and rare breed. It is one of eleven believed to have been built and one of five known to exist today. It is a Super Sport L89 Convertible fitted with a matching number V8 engine, aluminum heads, four-barrel carburetor, and rated at 375 bhp. Perhaps beauty was not the only alluring detail to this drop-top pony car for the chairman.

For a third year in a row, the judges selected a Figoni & Falaschi bodied car as their favorite. The award went to the 1947 Delahaye 135M Cabriolet presented by Jack Rick of Pottsville PA. It is one of eighteen Mylord cabriolets produced and one of only nine known to exist today. It was given a complete restoration in 2000 and is finished in Garnet Red. It won an award at the Pebble Beach Concours in 2006 and the post car for USB Motor Cars Under the Stars in 2007.

Conclusion
The Radnor Hunt was founded over 125 years ago and has always been the site for important equestrian events. Appropriately, the 2008 concours included horse drawn carriages that paraded the show field from historic Devon Horse Show Groups. The equestrian center is an appropriate location as coachbuilders originally perfected their crafts for horse drawn carriages. As the automobile grew in popularity, many made the transition, fitting their unique styles to the horseless carriages. A large number of the cars on the show field were hand-built, one-off creations built to owner's specifications, or as a show piece. The rarity, uniqueness and exclusivity of the vehicles make this event special, and a great venue to learn about automotive history.
Galleries
Zagato
Tri-Five Chevys