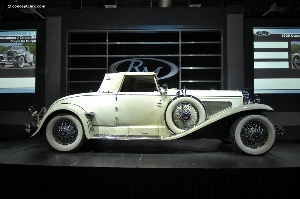 September 2008
A magnificent line-up of historic automotive treasures crossed the block on the weekend as RM Auctions hosted their annual ‘Vintage Motor Cars of Meadow Brook' event in Rochester, Michigan. Held in conjunction with the famed Meadow Brook Concours d'Elegance, the single-day sale attracted collectors from across the continent as it kicked off Autopalooza month in Detroit in grand style.

Canadian-based RM Auctions continued their coveted summer calendar of events on the weekend with the return of their Vintage Motor Cars of Meadow Brook event to Rochester, Michigan.

Held August 2nd on the grounds of the majestic Meadow Brook Hall estate at Oakland University, the single-day event showcased a magnificent line-up of vintage automobiles, placing a spotlight on a historic range of prewar classics and local Michigan-built automotive treasures. Over 100 motor cars crossed the block during the six-hour auction to account for a respectable $9.9 million in total sales.

As in previous years, the auction was preceded by the famed Meadow Brook Concours d'Elegance to make for an ultimate vintage car weekend for motoring enthusiasts

'This year's Meadow Brook sale exemplified the growing interest in the great masterpieces of the automotive world and was also a good indication of the continuing interest and strength of the market - great cars will always attract great bids,' said Ian Kelleher, Managing Director of RM Auctions.

'It was a pleasure to participate in this year's exciting 30th anniversary Meadow Brook Concours d'Elegance weekend, which kicked off Autopalooza month here in Detroit,' he added.

The top seller of the weekend was an unrestored and remarkably original 1929 Duesenberg Model J Convertible Coupe which brought an impressive $748,000. Also attracting significant interest on the block was the infamous, award-winning 1932 Chrysler CL Imperial Convertible – also known as the ‘Denver' car for its reported role in a bank robbery in the 1960s - which drew a final bid of $660,000.

One of the most interesting highlights of the sale was the original Albert Kahn designed front entrance facade from the 1907 Packard factory on East Grand Blvd, Detroit. Recognizing the historical significance of this architectural monument, many excited Packard enthusiasts participated in the frenzied bidding and settled at a final sale price of $161,000, well beyond the original estimate.

RM also had a strong presence on the show field at the Meadow Brook Concours d'Elegance, with numerous winning entries having passed through the doors of RM's esteemed restoration division in recent years. Included amongst the list of winners was the 1927 Isotta Fraschini Tipo 8A Roadster, which received ‘Best of Class' and ‘Best In Show' honors. These latest accolades add to a string of awards received by RM Auto Restorations and cement their reputation as the world's premiere restoration facility.

About RM Auctions Inc.
Celebrating nearly 30 years in the collector car industry, RM Auctions Inc. and its sister companies are responsible for acquiring, restoring and selling of the world's rarest and most valuable vintage automobiles. Renowned for setting international records, RM has offices in the United States, Canada and U.K. to provide international auction and restoration services for their global clients. In 2006, RM Auto Restorations, Inc. won the unprecedented 'triple crown' for receiving 'Best of Show' honors at the world's top three international collector car events – the Pebble Beach, Amelia Island and Meadow Brook Concours d'Elegance. For additional information on RM Auctions Inc., and this event, visit www.rmauctions.com or call toll free: (800) 211-4371.
Galleries
1903-1928