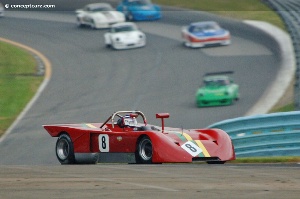 May 2008
As usual, Friday was mostly made up of practice with the 'Klub Sport Porsche Challenge' closing out the day's actives.

The day's final on track activity was the Klub Sport Porsche Challenge that took to Watkins Glen International Raceway for their 7-lap contest. Taking the checker flag in the weekends first race was Jim Hamblin, piloting his, No. 18, ‘68 Porsche 911, with John DeFord, in the No. 51, ‘70 Porsche 914/6, taking second and Cliff Berry drove the No 02, '71 Porsche 914/6 to the third spot.

Saturday was all about qualifying for all groups, with the Anglo American Challenge taking to the track shortly after lunch, with the Historic Stock Cars taking to the track for their first race of the weekend, and the 1-hr Rolex Classic GT/Historic Enduro closing out the day's activities.

The Historic Stock Car group took to the track in mid-afternoon, with 11 stockers running the 3.4-mile course, unlike their 'Sprint Cup' brothers that take to the 2.45 miles short course in their August event.

Making his second start of the 2008 HSR season in the Stock Cars was road racing 'pro' Eric Lux, taking his second win of the season aboard the No. 51 Ex-Kellogg's '97 Monte Carlo with Phoenix, Arizona's Mark Furcini driving the ex-Jamie McMurray No. 42 '05 Dodge Charger second, while it was Jack Finch driving his EX-BAM Racing No. 49 '06 Dodge Charger in third.

With forty-eight cars in the field, the day's final race, the 1-hr Rolex Classic GT/Historic Enduro, took to the track shortly after 5 PM with cars from the ‘60's to '03, from the IMSA GT and SCCA Trans Am Series.

With eight cars on the lead lap was Steve Pfeffer driving his ‘73 Porsche 911, No. 83 to the top spot in the Classic GT/Historic Enduro, while Paul Reisman in his ex-Trans-Am series '92 Mustang, No. 311 scored second. Richard Howe, also in an ex-Trans-Am series car, the No. 19 former Roush Whistler '89 Mustang, took third.

With the checker in the Rolex Classic GT/Historic Enduro everyone retired to Clute Park, located on beautiful Lake Seneca for the weekends excellent dinner. As always the 'worker choice' award, which is voted on by the SCCA workers manning the event is awarded, but with the winner not in attendance it was awarded Sunday morning in Victory lane . The lucky winner at 'The Glen', was Anglo-American GT Challenge winner Curt Vogt.

Sunday morning dawned with the 1-hr Rolex Vintage Enduro up first. It took the green shortly after 8:00 with the 22-car field made up of sports racers to production cars, from the 50's to the 70's, so there was something for everybody.

The remainder of the morning races was made up of the feature races.

First up, the Group 7 feature for Championship of Makes, with the field of 14-cars madeup of 60's-70's era Can-Am and Sports Racers from around the world.

Leading the field to the checker was Dudley Cunningham driving one of the best looking cars of the weekend. His Gold ‘75 Toj SC205, No. 21 2-Liter Sports racer, followed by Joel Finn piloting his No. 3, ‘72 Chevron B-23, with Roy Walzer (second place finisher in the mornings Rolex Vintage Enduro) driving his always fast No. 3 ‘63 Lotus 23 B in Third.

Next-up, the Historic GT race for Group 9. And, it had much the feeling of an 90's era Trans-Am. With Richard Howe leading the way to victory lane once again he drove his usual mount, the No. 19 former Roush Whistler '89 Mustang to the win, with series regulars Paul Reisman (No. 311, ‘92 Mustang) and Don Soenen (No. 74, ‘95 Mustang) taking second and third.

The last race before lunch was the Group 5, Classic GT feature and taking the win was another pair of series regulars. Eric Bretzel, in a 'brand new' No. 09, ‘72 Porsche 911, taking the victory over the beautiful Dark Blue No. 61 '61 Jaguar XKE of Larry Ligas in second, with Chuck Bentley coming home in third in his No. 00, ‘67 Camaro. After the lunch break the Group 8, Stock Car boys took to the track for their weekend's final race, a 1-hr. enduro.

And once again it was road racing 'pro' Eric Lux, taking his third win of the season aboard the No. 51 Ex-Kellogg's '97 Monte Carlo with Dale Phelon driving his ex-Yates racing No. 90, ‘06 Ford Fusion, in second place while Maurice Hull in an ex-Petty Enterprises, No. 44 ‘05 Charger, captured third.

The Group 2 & 3, Vintage/Historic Production race saw many of the cars that took the green in the Sunday morning, Rolex Vintage Enduro with 23 cars taking to the track for the 7-lap contest.

The Group 6 feature enduro for IMSA GTP/WSC cars was actually two races in one with the race broken down into a 1-hour and 2-hour segments.

And the first one hour segment went to the Jim Rogers owned and Bill Adam driven former '00, Champion Audi R8 No. 38, Bill's driving deal is the best in the world, I'll let him explain. 'Jim promised his wife to stop diving,' smiled Adam. 'But she didn't say he had to get rid of the cars so I get to drive the Audi R8 and maybe some of the others this year, sweet deal!'

Bill took the 1-hour win with 2-hour winner George Robinson and some guy named, I think, Elliott Forbes-Robinson, co-driving in second at the one hour mark. But as the checker fell on the races 2-hour mark, it was Robinson & EFR in the No. 74 ‘74Ranch ‘01 Riley & Scott MKIIIC winning by a ton (8 laps) over second place finisher Richard DeMan in a 01 Porsche 996 RSR, No. 72.