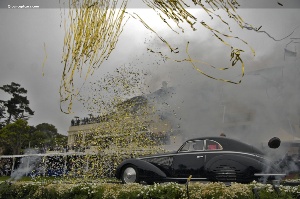 October 2008
The 58th annual Pebble Beach Concours d'Elegance was a spectacular event that celebrated the 100 years of General Motors, Lancia's Centenary, 45 years of Lamborghini, as well as veteran cars that had participated in the original London to Brighton road rally. Though classic cars remained the core, there were many postwar automobiles, as this was the best representation of several of the featured marques.

Throughout the day, fog and clouds covered the sky and scenery. Last year's temperature were the hottest to date for the event and this year, it was the opposite - cold and overcast. A few days prior to the concours was the Tour d'Elegance. This event also had the misfortune of being blanketed with fog and hiding much of the Pacific Ocean and the breathtaking California scenery.

Celebrated Classes
London-to-Brighton
The oldest cars on the eighteenth fairway of Pebble Beach Golf Links were the cars that had originally participated in the world's oldest motoring event - the London to Brighton Veteran Car Run - which dates back to 1896. Cars in this category included a 1892 Peugeot Type 3, one of the oldest roadworthy vehicles in the world which is completely original, and the 23rd Peugeot ever made. The Peerless Style F Rear Entrance Tonneau participated in the 1984 London-to-Brighton veteran Car Run driven by its then owner Phil Hill, who restored the car in the 1980s. The youngest car in the group was a 1904 Northern Touring car that has participated in five London-to-Brighton runs.

General Motors Centenary
The categories honoring 100 years of General Motors included 'General Motors Woodies', 'Motorama Cars', and 'GM-Powered Sports Cars'. GM's presence was felt in several other categories, including the 'Cadillac V-16' class which had the prime real-estate with the ocean as their backdrop. As the cylinder wars continued to escalate during the early 1930s, Cadillac introduced their contender, the V-16 Cadillac, which they advertised as 'The Car of Cars, the finest medium of personal transportation on earth.' The Owen Nacker built engine was both powerful and smooth, capable of carrying the heavy, elegant, and stately bodies built by in-house coachbuilder Fleetwood. Production was limited, as their high price kept them out of reach, especially during the height of the Great Depression.

The Motorama exhibit stressed the impact that GM designers like Harley Earl and Bill Mitchell had on the world. The Buick Y-Job was created by Earl in 1938, which is often cited as the first concept car. During the 1950s his futuristic 'Dream Cars' were shown in cities throughout the country in an exhibition known as the GM Motorama. This rolling display was meant to showcase new technologies, new designs, and inspire enthusiasm for the direction the company was headed. The impressive array of Motorama showcased included all four Firebird concepts as well as a massive Futurliner bus. The unconventional designs of the Firebird concepts were matched by equally futuristic and creative technological innovations, including titanium bodies, guidance systems, turbine engines, and air drag brakes. Other examples on display included the Buick Wildcat I and II, Pontiac LaParisienne, Cadillac LeMans, and the Oldsmobile Stafire. Surprisingly, only one Motorama design would ever make it into full production and that car would enjoy a career that still exists today - the Chevrolet Corvette. Several of the names would later be used, including the Buick LeSabre, Buick Wildcat, and Pontiac Bonneville. Joseph E. Bortz, the largest private collector of Motorama cars, graciously brought five cars to this year's event.

The enjoyment of seeing so many Motorama cars in one setting was impressive, considering that once the Motorama cars had finished their tours, they were ordered to be scrapped. Had it not been for individuals hiding and preserving their legacy, these futuristic dream cars would surely have met the crusher and become nothing more than compressed square boxes.

Lancia
Lancia was founded in November of 1906 by Vincenzo Lancia and Claudio Fogolin, in Turin, Italy. Their first production car, a 12 horsepower model, was created in January of 1908. Since then, Lancia had introduced many innovations including the narrow V4 and V8 engines, independent front suspension, and the first unitary steel hull chassis in 1921. Over the next decade, Lancia would continue to grow, building on the success of their high-revving V4 Lambda model. The 1930s saw the introduction of the lightweight and aerodynamic Aprilia. In 1950, the Lancia Aurelia was introduced. These Post-War models benefited from the talents of legendary engineer Vittorio Jano and his Grand Prix experience. During the 1960s, the company offered two industry-leading front-wheel-drive models, the Flavia and Fulvia. In the 1970s, Lancia introduced their legendary purpose-built rally cars, the Stratos.

There were two categories reserved for the Lancia Marque, pre- and post-War which included a total of fifteen entries. The list included the first model produced, the 1908 12 HP Alpha, Theta, two Lambda's, a D24, a pair of futuristic Aurelia Narid Blue Ray cars, and the Lancia Stratos Prototype. From this magnificent group, the judges selected the brightly colored 1933 Lancia Astura as their favorite in the pre-War category and the 1952 Aurelia B53 Giardinetta as the winner of the Post-War Best-in-Class trophy. The Aurelia Giardinetta wore a 'woody' estate-wagon body from one of Italy's oldest coach-building companies, Viotti. This car remains as one of only two surviving examples from a run of 47 created by Viotti.

45 Years of Lamborghini
Lamborghini vehicles at concours events are rare, as traditional concourses focus on post-war vehicles. Sure, Lamborghini's are regularly seen in modern supercar categories, but their chronological story is rarely told in this type of setting. This being the case, an entire category devoted to Lamborghini was simply Elysium. The list of entrants included one of the production 350GT prototypes. It is equipped with many unique features and is the earliest 350GT extant. Carrozzeria Zagato was the first coachbuilder to exhibit a derivative of the 350GT - the 3500GTZ. Only two examples were ever made and one was in attendance. The three Miura models that graced the fairway are perhaps the most unique and special still in existence, including the earliest example extant and a one-off Roadster. The P-140 prototype from the early 1990s made its world debut at this year's event, marking the first time it was ever seen in public. Rounding off the category was the Zagato bodied Raptor. This one-off was based on the Diablo and first shown in March of 1996 at Geneva.

Lamborghini test-driver Valentino Balboni was invited to judge the Lamborghini Class. Along with two other judges, the 350GT Touring Production Prototype was given the Best in Class Trophy.

Marque Categories
There were nearly 30 classes and seven were reserved for Lancia, GM, and Lamborghini. Only three other manufacturers were given similar honors, and those were Ferrari, Mercedes-Benz, Rolls-Royce, and Packard.

Ferrari was given two classes, one for their Grand Touring Cars and the other for their Competition cars. Mercedes-Benz Pre-War cars were recognized with examples including the 500K and 540K, the 770K, and the SSK. A Rolls-Royce Pre-War Category housed several cars from this legendary marque, including the Phantom I, Phantom II, and the Phantom III. The most unusual and alluring was the Phantom III designed by Freestone & Webb and clothed in a double skin of cooper over steel. Its brightly colored body makes it one of the more flamboyant designs ever executed.

Throughout most of the classic era, Packard outsold all of its competitors in the United States-including Lincoln, Cadillac and Pierce-Arrow. At its peak, in 1928, over 55,000 Packards were sold, and it built some of the most luxurious cars available anywhere in the world. In honor of their many accomplishments, a class was reserved for open-bodied Packards. Best of Class went to the 1934 Packard 1108 Sport Phaeton with LeBaron coachwork.

20+ Liter Club
History has only produced a handful of 10+ liter cars since the dawn of motorcar. One of the more recent examples is Cadillac's Sixteen Cylinder Concept first shown at the 2003 Detroit Auto Show. Most cars with these exorbitant engines were racing specials of the '20s and '30s when 'There was no substitute for cubic inches.' Several production vehicles were given 10+ liters to carry their stately bodies, including the Thomas Flyer, Oldsmobile Limited, Pierce-Arrow Model 66, Reanult Model 40 Type NN, Panhard et Levassor Type Q, and the Bugatti Type 41.

With such a short list of cars fitted with 10+ liters, this year's category of 20+ liters was nothing short of phenomenal. Four examples, with bonnets so long they deserved their own zip code, lined the plush green grass of Pebble Beach. Two examples were powered by Henry Royce designed Merlin aircraft engines. The larger of the two had a 27-liter engine that has the potential of consuming 100 gallons of fuel in an hour. The Swandean Spitfire Special fitted with a Merlin-powered engine and enhanced with a supercharger offered a staggering 1600 horsepower. Not to be outdone, talk-show host Jay Leno brought his 20-foot long Chrysler Tank Car. The 28.4 liter engine with twin TR 72T turbochargers and new Bosch fuel injection setup has enough horsepower for an entire fleet of cars. Top honors went to the 1913 Benz 200HP Snutsel.

Awards
Between the Best of Show Nominees and the Most Elegant Award Categories, Alfa Romeo took three out of the seven awards. They earned Top Honors in the 'European Classic Open' and 'European Classic Closed' classes, and a Second-in-Class in 'Postwar Sport' category. They won the Elegance in Motion Trophy, Mille Miglia Trophy, and the Phil Hill Cup. Their biggest accomplishment of the day was winning the judges hearts and approval with the coveted 'Best of Show.'

As the overall winners from each class were corralled into one location, the judges each chose their favorite. When it was time to announce the overall winner, three potential candidates were lined up at the base of the ramp leading up to the award stage. The crowd in one simultaneous motion arose from their chairs and moved as close as possible to the stage. Trumpeters signaled the start of the pyrotechnics, and cannons shot confetti and streamers, as the winner was invited onto the stage. When the drama began to subside and the yellow and white confetti flakes had finally fallen to the ground, on one of the worlds most accomplished stage was an Alfa Romeo 8C 2900 B Corto Touring Berlinetta owned by Jon and Mary Shirley.

Conclusion
From the concept cars that greeted guests as they arrived at Pebble Beach, to the Motorama Dream Cars that sat on the 18th fairway, the 58th edition of the Pebble Beach Concours d'Elegance was a brilliant display of well-crafted masterpieces and technological marvels from their era. All of the vehicles, even those that fist appeared 'normal', were unique and special.
Galleries
A1 - Antique through 1915

A2 - London to Brighton Veterans