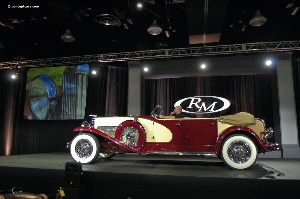 October 2008
RM Auctions held their 2nd Annual Vintage Motor Cars of Hershey at the famous Hershey Lodge. The collector car market eagerly awaited the outcome, since the current economic climate on the global hobby has raised several important questions. Wall Street had a very shaky week and many feared this would have a profound impact on the outcome of the sale. Those fears were laid to rest as total sales surpassed $6.9 million with 88% of the vehicles finding new ownership.

'Despite recent fluctuations in the financial markets, collectors and enthusiasts remain positive about the classic car market,' said Ian Kelleher, Managing Director of RM Auctions following the auction. 'RM continues to be the barometer for the industry and strong sales results coupled with an increase in international interest – namely European bidders - at our Hershey event are a good indication that the market for alternative investments remains strong,' he added.

The highlight of the sale was the 1933 Duesenberg Model SJ La Grande Phaeton. It was the only car of the auction expected to fetch over a million dollars, and possibly as much as $2.4 million. Bidding was rather lively and, as expected, quickly rose above the magical million dollar mark. That euphoria soon left as bidding peaked at $1.425 million. After several minutes of coaxing the crowd, the car was rolled off the stage; the high bid was not enough to satisfy the vehicle's reserve. Later it was announced the car was sold, netting $1,688,500 including buyer's premium.

One of the local highlights was the circa 1899 Karns Runabout, which had been built in a surrounding neighborhood. It is possibly the only example left in existence. It was sold for $28,600 and falling within the estimated value.

Auction Analysis
It is difficult to use this auction as a predictor for the overall collector car market, as this is only the second time RM has held their auction in Hershey, PA. Too many variables and unknowns exist. Nevertheless, sales were strong with 88% of the vehicles sold. 13% were sold below the estimated value while 18% were sold above the estimated value. Of the 84 vehicles to cross the block, 74 were sold with an average sales price of $93,136. Including memorabilia, total sales surpassed $6.9 million

Last year there was a 97% sales ratio, 38% were above the estimated value, and 113 vehicles sold totaling $12.3 million. Using last year as a comparison is also unfair, because many of the featured vehicles were from the 'Swigart Collection' and had not been offered for sale for the last 30-60 years.

Conclusion
The financial roller coaster of the current economy has raised many questions about the state of the collector car market. The big question surrounding the 2nd Annual Vintage Motor Cars of Hershey presented by RM Auctions was 'Has the market changed?' Buyers are knowledgeable and many have been active in the market for a long time. They have been purchasing desirable, important, rare and expensive cars and have been willing to pay for the right car. Some of the new-comers to the hobby have overpaid for the wrong cars and, as a result, have lost money when ready (or forced) to sell at the true market value. This re-alignment, coupled with downturns in the market, has many worried. The past few months, however, have shown that the collector car market is still a safe investment especially for the right car at the right price. The Vintage Motor Cars of Hershey reinforced those notions and continued to prove that the superb restorations and the rare have continued to remain strong.
Galleries
1899-1922
1924-1934