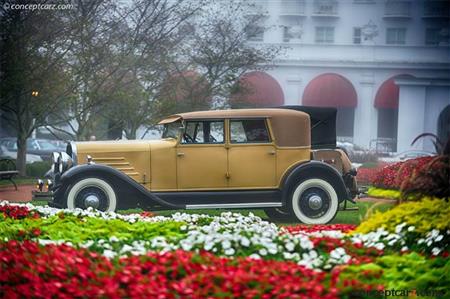 September 2020
A weekend full of horsepower, friendships and history — with a little social distancing mixed in — came to a conclusion Sunday, when the 1929 Duesenberg Model J Roadster owned by Dwight C. Schaubach of Hampton Roads, Virginia, was presented with the Best of Show Award at The 2020 Greenbrier Concours d'Elegance. The Best of Show trophy was created on property at America's Resort by Virtu Glass.

The first Model J Duesenberg, J112, debuted at the Automobile Salon in December 1928 and was sold to Humphrey W. Chadbourn for $13,500. Chadbourn had the factory add a spotlight, electric siren, Martin Cord tires and an HWC monogram on each door. When the factory closed in 1937, he sold the car to a Yale student. Numerous owners later, Mr. Shaaubach bought and restored the J112 in 1996.

The jaw-dropping Duesenberg wasn't the only big winner on Sunday. Class champions were named in each of the 10 classes that were showcased on the picturesque showfield, surrounding the iconic front entrance at The Greenbrier.

'Every automobile in the show was spectacular, which made the judges' job a difficult one,' said Phil Neff, Chief Judge, The Greenbrier Concours d'Elegance. 'The field was filled with incredible cars and motorcycles, and each one could have taken home a trophy. I was honored to be able to lead a qualified group of judges from all over the United States and be part of such a special weekend.'

In addition to the class awards, 10 special awards were presented at the trophy ceremony, and the winners received hand-crafted trophies made by the craftsmen at The Greenbrier. The awards featured the iconic Springhouse, which has been a symbol of America's Resort for centuries. The winners included:

Sunday's Concours was the culmination of a weekend full of events for car owners from across the country.

On Friday, The Greenbrier Concours d'Elegance started its engine with The Summit Drive, which took car enthusiasts to the top of Greenbrier Mountain to The Summit at The Greenbrier Sporting Club for brunch. Following brunch, the cars of all eras and varieties embarked on a drive through West Virginia mountain roads to Durbin, West Virginia, where participants took a ride on the Durbin Rocket, a vintage steam engine that carried passengers through beautiful Mountain State scenery.

Saturday began with Cars & Cocktails, which featured more than 100 cars of all types displayed on the world-class golf courses at The Greenbrier. That was followed up with a seminar on the weekend's featured class, Cadillac, and the evening concluded with a Charitable Dinner, which benefitted the Mountaineer Autism Project, as well as the AACA Library and Research Center.

All of those events served as appetizers for the main course on Sunday, as the finest collector cars in the world were judged by Neff and his qualified team of concours judges.

'We couldn't have asked for a better weekend,' said Cam Huffman, a member of The Greenbrier Concours d'Elegance Steering Committee. 'The weather was beautiful, the cars were incredible and people really enjoyed getting together for the first time in a long while. Everyone followed COVID-19 protocols, which allowed us to have an amazing event from start to finish. We're grateful that we were able to continue what has become a grand tradition in a year filled with so many challenges.'

Plans have already begun for The 2021 Greenbrier Concours d'Elegance, when the event moves back to its normal May date. A special non-judged Movie Cars Class will be just one aspect of the 2021 event, which will be held April 30-May 2.
Galleries
Grand Classics