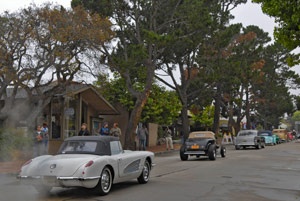 October 2008
Once a year, the automotive community descends upon the Monterey area in search of the rare, the exclusive, and the expensive. Their efforts are rewarded with auctions, car shows, racing, driving tours, parties, and many more activates. It is a flurry of events that spans many days and includes The Quail - A Motorsport Gathering, the Monterey Historics, Concorso, and the Pebble Beach Concours. A newcomer to the list was added in 2007, called the 'Carmel-by-Sea Concours on the Avenue held in Carmel, CA.' It featured 130 vehicles with a different flavor than the other events held during this time. The vehicles in attendance were affordable, built between 1946 and 1971, and were household names that achieved serial production. Spectators reminisced about the showcars with many commenting that they had owned similar examples or remembered seeing them on the roadway. 'I remember when....' was a popular phrase as was 'Back in my day...'. Another interesting feature to this event was its admission price; most activities during this time are expensive, the 'Concours on the Avenue' is free.

Early in the morning, the show cars are corralled onto a side-street a few blocks away from The Avenue. When all is ready, the cars are led into the village of Carmel-by-the-Sea and carefully positioned at an angle, plenty of space is left between each vehicle, and a clay pot with a live flower placed in front. A full lane was made available for pedestrian traffic to leisurely meander through the timeless wonders. The seven blocks of show-field in the little village had quaint shops, critically acclaimed restaurants, galleries, and charming boutiques as the backdrop that carefully envelope this relaxing event. The shops participate by displaying pictures and memorabilia in the spirit of the concours; awards are given to the best display.

The inaugural event was so successful that organizers added a second day and twice as many vehicles. The list included a vivid mix of post-World War II American and foreign cars ranging from sports cars to luxury cars, and from super cars to micro cars.

The first day of the concours honored Ferrari and Porsche thru the early 1970s. Though both of these marques easily and quickly escalate into the realm of exclusivity and high cost, concours organizers kept the display rather modest with many common and well-known examples. The second day of the concours was an eclectic mix of vehicles from the post-WWII era thru the early 1970s. There was plenty of Detroit steel from muscle cars to station wagons. There was a good showing of European vehicles, especially British cars such as Bentleys, Jaguars, MG, Lotus, Triumph, Morgan, and Austin-Healey. This seemed fitting as many returning American GI's had acquired a taste for these small and sporty cars after the war and brought them stateside on their return. Their grandeur, heritage, and affordability made them popular among the masses.

There were categories for luxury cars, historic race cars, sports cars, and even micro cars. The opulent, plush, and enormous cars in the luxury car category were strikingly different than the simplistic, utilitarian vehicles found just a block away in the Micro Car category. Though dissimilar in nearly every aspect, there were similarities, mainly in respects to their designs. The British and European Luxury cars, such as the Citroen DS21, Bentley Mark VI, and Jaguar Liter cars were aerodynamic, with sweeping fenders, enclosed wheel wheels, and curvy bodies. The Micro Cars, employing every advantage possible, were designed as efficiently and affectively as possible. In both categories, it is evident that many talented engineers and former aircraft personnel used a colorful approach and ingenuity to a new generation of automobile enthusiasts.

Just like other shows, 'Class Awards' and 'Best of Show' are rewarded to the most deserving in the group. Selections are based on a variety of factors including authenticity, originality and provenance. Additional consideration is given to cars that inspired youthful dreams, interesting stories and the hard-to-define fun factor.

It is amazing and commendable that this event is successful due to the plethora of other automotive events - those that have a long history and faithful following – that occur around this time. Attracting enthusiasts to stay in the area longer and attend even more shows is (surprisingly) a tall order. The success of the first year convinced organizers to make it a two-day affair and doubling the number of vehicles on display. What makes it special is its uniqueness. It is different; it showcases cars not usually seen at the other events. The scenic area, the relaxed atmosphere, the gentle roar of the ocean just a few short blocks away, a great assortment of fiberglass, aluminum and steel, and the lack of admission price help solidify this as a new pillar in the prestigious groups of events which make up the area's internationally known Monterey Peninsula collector car gathering.

The Carmel-By-The-Sea Concours On the Avenue supports the Carmel Foundation in their work to provide a wide variety of services to Monterey Peninsula seniors.
Galleries
American Family Favorites - 40s - 60s