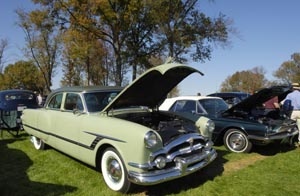 December 2008
The Eastern Division AACA National Fall Meet takes place each year during the 1st full week in October. The Hershey Region began hosting the show in 1955 and has done so each year since then.

The meet is located in beautiful Hershey, PA on the Hershey park and Giant Center parking lots and surrounding grounds. The show is considered one of the largest antique automobile shows and flea markets in the United States.

It consists of over 9,000 flea market spaces, over 1,000 car corral spaces, and approximately 1,500 show cars. Each year the show attracts visitors from all over the United States and many countries throughout the world. Some of the most unusual cars and parts can be found at Hershey. If you love antique cars, Hershey is the place to be.

Together, the Kruse family has broken more than 250 world record prices in the collector car industry. Dean Kruse cried his 5,000th auction at the annual Houston sale in August 1987 and became the youngest man ever to attain that goal. His auction total is now well over 6,000 auctions.

The future of the collector car hobby is very bright and so is the future of Kruse. The industry is witnessing thousands of new enthusiasts each year and a myriad of new markets worldwide. With a strategic position with the continued successful growth of existing and new auction events, Kruse International remains the World's Largest Collector Car Sales Organization.
kruse.com

Hyman Ltd. Classic Cars
Hyman Ltd. Classic Cars specializes in the acquisition and sale of prewar Classic automobiles, post war American collectible cars and both pre and post war sports cars. They are well known for having some of the most unusual collector vehicles and we strive to find something that you have never heard of. They aggressively search throughout the country for cars that meet our standards of quality and desirability. They act as principles in the purchase of the cars, and while They do accept select consignments, the vast majority of the cars on hand are owned by Hyman Ltd. They cater to collectors and museums internationally and ship cars to most parts of the world.
hymanltd.com
Galleries
1906-1930 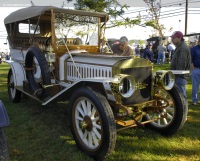