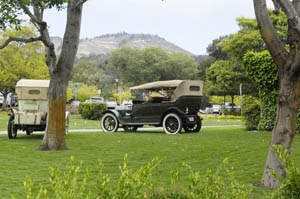 December 2008
Appropriately named, the Bonhams & Butterfields sale of 'Exceptional Motorcars and Automobilia' had another extremely impressive event during a very busy automotive weekend in August of 2008. Held in conjunction with 'The Quail, A Motorsport Gathering' event, there are plenty of activities that draw the collective automotive community and enthusiasts to California during this time. With many of the other top auction companies in town, this is certainly the time and place to buy and sell.

Total sales reached $21.7 million and achieved three world records in the process. The at-capacity crowd of collectors and motoring aficionados from around the world bid enthusiastically for the extremely rare and historic competition machines from noted private and institutional collections.

Ex-Dan Gurney/Walt Hansgen, Jack Brabham and Bruce McLaren, 1960 Jaguar E2A Le Mans Sports-Racing Two-Seater Prototype, sold for a record breaking $4.95 million. The sale was the highest ever achieved by a Jaguar at auction. This 'missing link' prototype car has a racing history that includes a visit to LeMans and the United States SCCA racing scene.

Another in the long list of notable entries was a 1936 Lagonda Rapide, one of four competition models built by Lagonda specialists and racing drivers Arthur Fox and Bob Nicholl. EPE 97, as it is registered, raced extensively in 1936 and 1937 in events such as the RAC Tourist Trophy, 1936 French Grand Prix at Montlhery and the BRDC 500-miles race at Brooklands. It was there that it finished 3rd with an average speed of 113.02mph. Charles Brackenbury and John Hindmarsh piloted the car at Le Mans in 1937, but retired it with mechanical problems. As the gavel fell for the third and final time, the lot had been sold for $1.38 million.

Auction Analysis
The average sale value for the 77 motorcars was a very impressive $291,158. The highest sale was the Jaguar E2A, with the lowest being an Avions Voisin C28 Sahara Convertible. It was not an original car, rather it was a recreation which played a starring role in the hit-movie 'Sahara.' 44 of the 77 automobiles that crossed the auction block were sold. 29 of the vehicles sold above six figures and five were in the magic million dollar range.

Bonhams and Butterfields proved once again that they are more than capable of selling automobiles. With stiff competition from other auction houses, an upcoming presidential election, and an unstable economy, the deck was surely stacked against Bonhams - and the collector car market in general. What continues to hold true is that exception cars continue to hold their value and promise to be a solid investment.
Galleries
1904-1931
1933-1939
1949-1967