By Daniel Vaughan. The Monterey Historics made a triumphant return in 2021, having taken a year off due to the global pandemic, and although participation was down (roughly 350 cars instead of the common 500+), the crowds were quite robust - albeit, lacking the international flavor that is usually at the event. The Indianapolis museum displayed some famous 500 cars, the La Carrera Panamerica had a wonderful contingent of cars, the 70th Anniversary of the Pebble Beach Road Races, and Ford brought a well-curated collection of Trans-Am cars. The pits were filled with automotive goodness, including a plethora of Ragtime Racers - race cars over 100 years old. 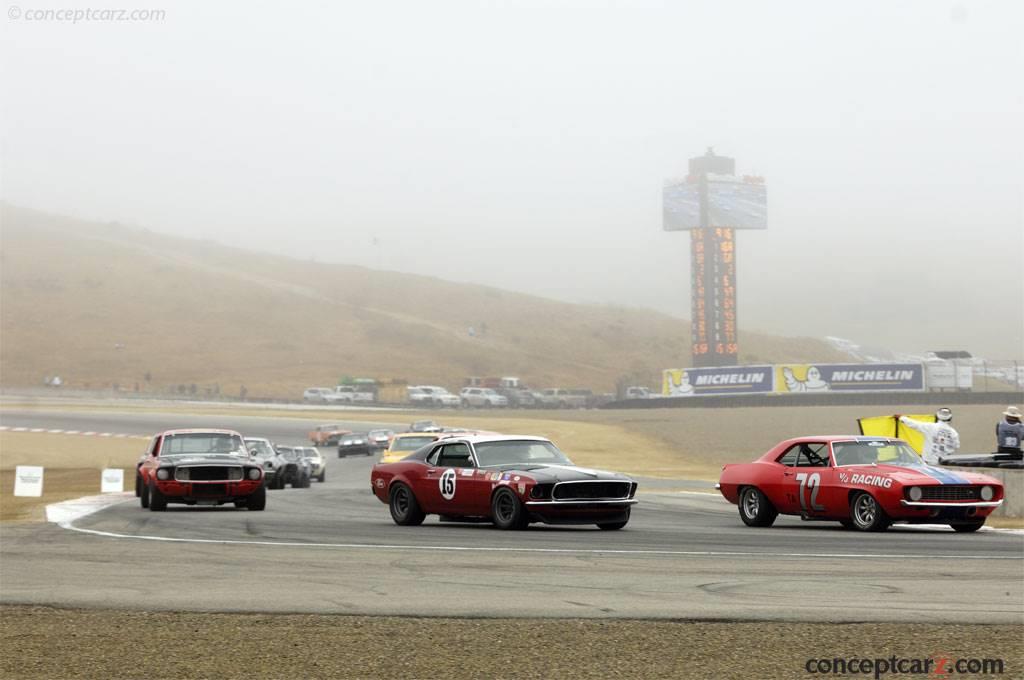 It has been fifty-five years since the Ford Motor Company stepped into the world of Trans-Am Racing, and their involvement quickly escalated the epic battle among teams and drivers who fought for valuable championship points. The series began with two classes, one for over 2.0-liter vehicles and another for under 2.0-liters. The large V8-powered cars quickly became the crowd favorite, with Jerry Titus winning the 1966 championship for Mustang with a victory in the season's final race at Riverside. The following year, the 'Pony Car Wars' escalated even further, as Ford, General Motors, Chrysler and AMC vied for the hearts and admiration of the crowd, securing bragging rights, and reinforcing reputations. Even tire manufacturers and oil companies were heavily invested in the sport.

'The histories of Ford, Trans-Am and Laguna Seca date back to 1969 when the series made its way to Monterey,' explained John Narigi, president and general manager of WeatherTech Raceway Laguna Seca. 'It was a who's who of drivers that August weekend. In Fords were Peter Revson, George Follmer, Parnelli Jones and Dan Gurney, who finished third in his Ford Mustang Boss 302. Mustang came back to win in 1970, with Parnelli Jones taking the checker.' 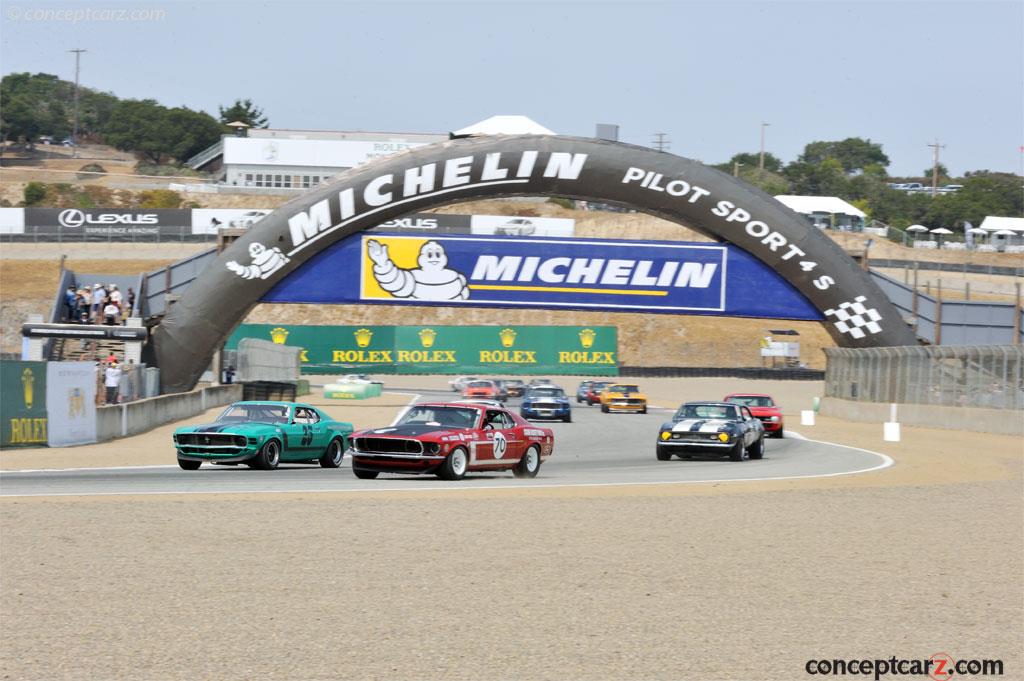 The influence of Trans Am racing extended well beyond the track, benefitting road-going vehicles with chassis sophistication and mechanical prowess introduced first at the track. As a result, cars became more affordable and more competitive with their European counterparts. Celebrating this glorious moment in history, Ford brought vehicles from the featured years of 1966 to 1972 and 1981 to 1981. Several of the cars were fielded by epic teams including Bud Moore, Roger Penske and Jack Roush. Alongside its past, the Ford motor company had several cars from its 'future,' including the 2021 Shelby GT500, the Mustang Mach 1, and the all-electric Mustang Mach-e GT. It has been fifty-five years since the first Trans-Am championship, and Ford proudly displayed Mustang products that continue to set the pace.

The five cars that won the Feature Race/Del Monte Trophy at the 1950-1956 Pebble Beach Road Races were on display, including the 150 Jaguar XK120 driven by 23-year-old Phil Hill, the 1950 Allard J2 piloted by Bill Pollack, a 1953 Ferrari 250MM Vignale Spyder which earned Phil Hill his second victory at Pebble Beach, a 1954 Ferrari 340 MM Vignale Spyder driven by Sterling Edwards, and a Phil Hill-driven 1955 Ferrari 750 Monza Scaglietti Spyder. Additionally, the Rolex Monterey Motorsports Reunion featured the 1949 Parkinson Jaguar and the 1950 Cannon Mk.1 Special which completed the top three at the inaugural 1950 race at Pebble Beach. Several of the cars which had originally competed at the Pebble Beach Road Racers participated in this year's Group 4A competition. The list includes the 1950 Cannon MK1 Special, 1952 Streets Manning Special, 1953 Tatum GMC Special, 1951 Baldwin Hanssen Special, and the 1955 Cleary Crosley Special. 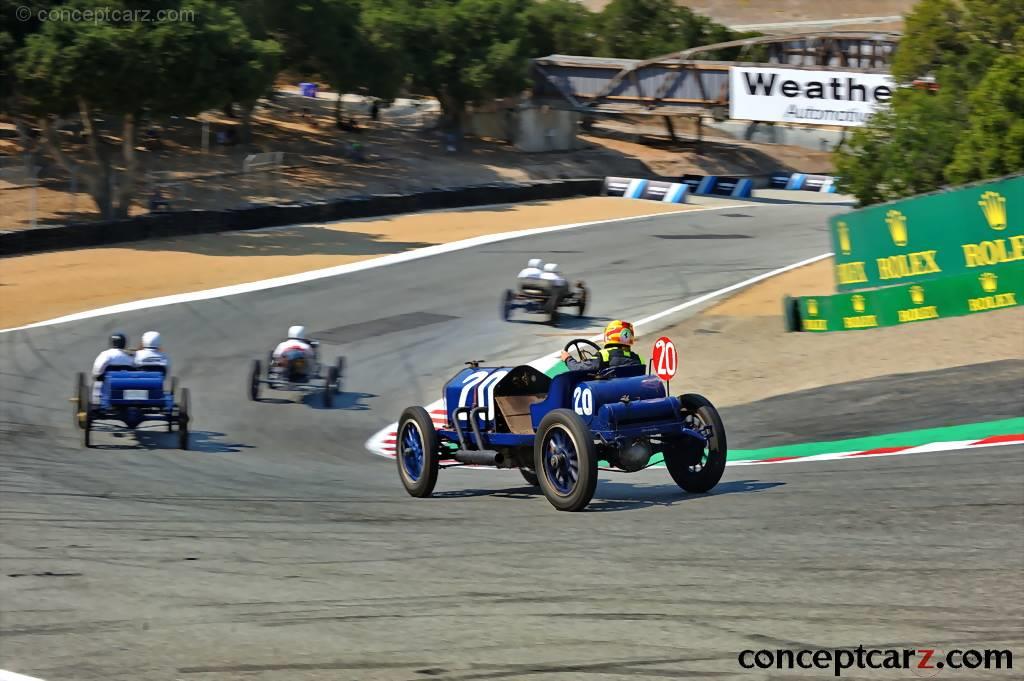 The affectionately named Ragtime Racers was formed in 2018, assembling a group of 1920 and earlier race cars dedicated to presenting these machines in a historic setting. Although there are many significant race cars from this era residing in collections and museums across North America, the group's intentions are to display their abilities at speed, allowing spectators to enjoy their sights, smells, and sounds on various race tracks and to experience the 'Heroic Age' of auto racing. The Ragtime Racers represented the largest single gathering of pre-1920s racers ever assembled in Monterey. Group organizer Brian Blain explained, 'We encourage entrants to spend time sharing the history of their cars, allow photos behind the wheel and display tools and equipment from the period as well.' 'We want it to be a time warp for spectators to see and enjoy.'

When these relics were not tacking the steep slopes of Laguna Seca Raceway, they rested in the pits, with crews conducting pit stop demonstrations, engine repairs and guest tours each day.

The Races
The weekend preceding the four days of racing included two days of -what is known as the -'Pre-Historics', additional days of racing/testing/tuning for the drivers, and additional time for enthusiasts to enjoy the road of engines echoing off the hills of Laguna Seca Raceway, and rubber-hits-the-road goodness. Eight Racing groups (Group A) were run on Thursday and Friday morning with their races occurring on Saturday. There were six 'B' Groups that ran during the afternoon sessions of Thursday and Friday, with their races on Sunday.

The groups were organized by year of manufacturer, displacement size, and various other metrics. There was a group for 1966 to 1972 Trans Am Racers, 1963 to 1978 Indy Cars, the Pre-120 Ragtime Racers, 1966 to 1985 Master Historic Formula One, and 1920 to 1951 Racing Cars. The Indy Car category included vehicles that date back to the roots of the rear engine Indy Car design, showcasing some of the finest examples ever created, including Dan Gurney's AAR Eagles. Also on the entry list was an early McLaren Indy Car. The Master Endurance Legends group housed modern endurance cars that were recently retired from Grand Am, IMSA, ALMS and other similar series. Exotic machinery found in this group included Audi and BMW LMP cars. The Masters Historic Formula One category dived into an era of Cosworth and DFV engines, where brilliant designs were rewarded with victories against F1 giants Ferrari and Lotus. All cars in the field were in period correct livery, with grids that included Tyrrell, Wolf, and Arrows. The FIA Manufacturers Championship was an eclectic group of cars from the 1960s and 1970s that competed in the world's most famous endurance race - the 24 HOurs of LeMans. Among the prototypes included in this group were the Lola T290, T294 and T298, and the Porsche 908 and 910. 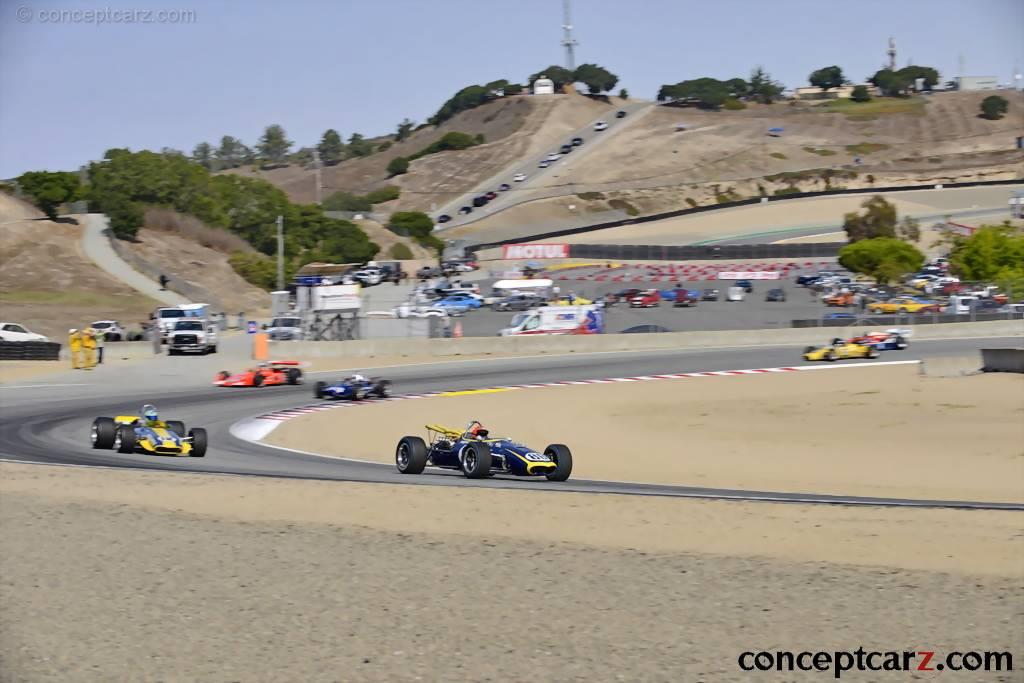 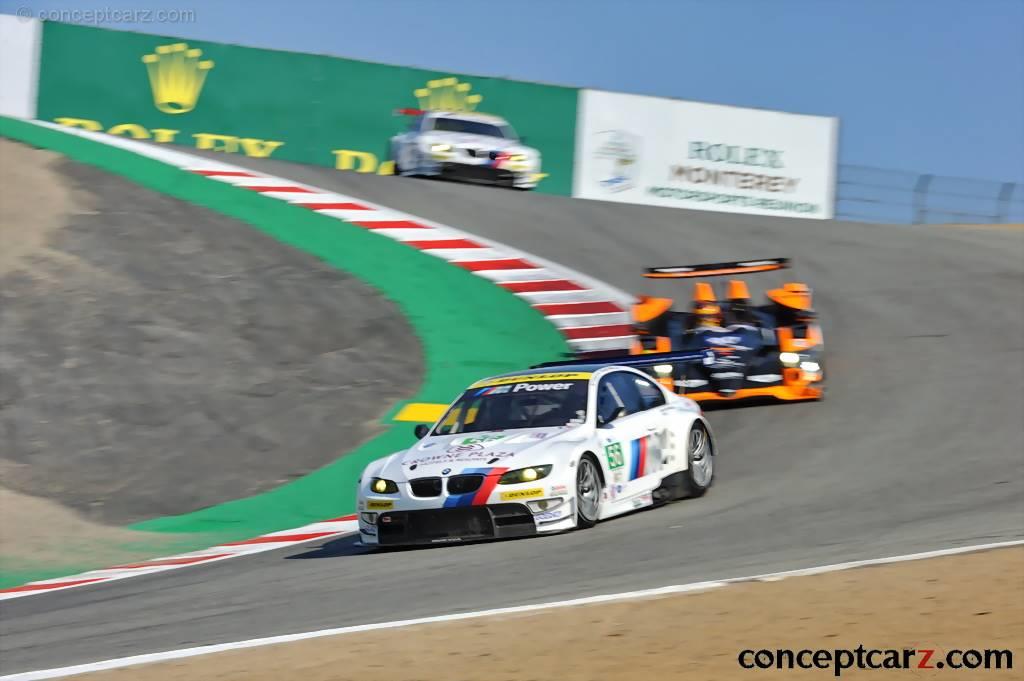 The 2011 BMW M3 GT chassis number 1101 that was driven by Joey Hand, Dirk Mueller and Andy Priaulx to victory at the 12 Hours of Sebring in 2011. The car came back to win again in 2012 with Hand, Mueller and Summerton sharing the driving duties. Chassis number 1101 was involved in a late-race crash at the 2012 Road America round that ended hopes for another podium in that race. 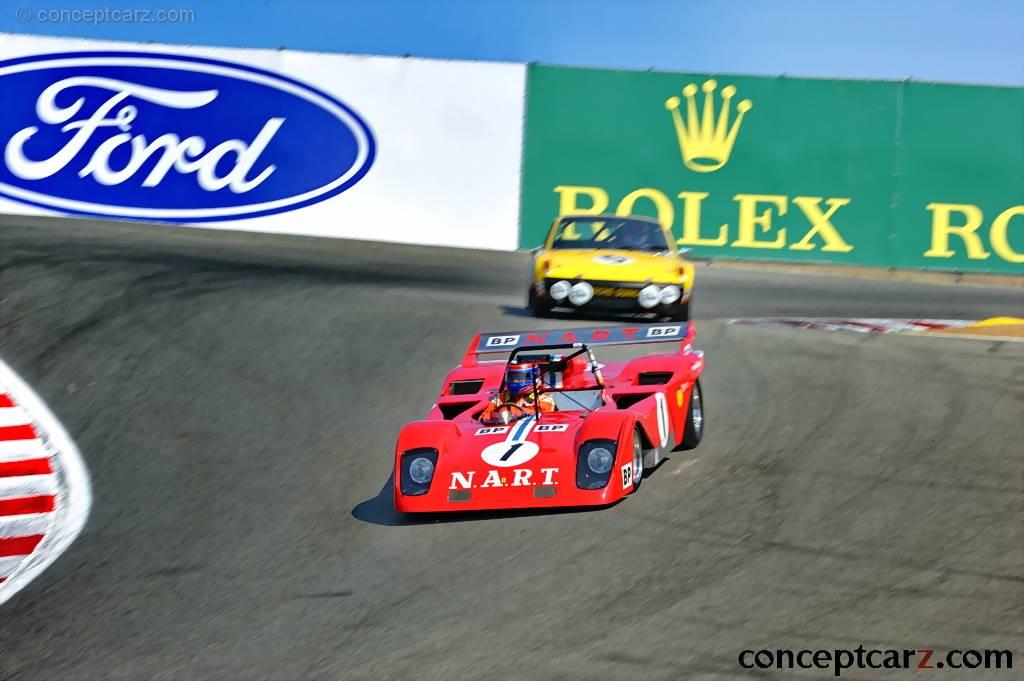 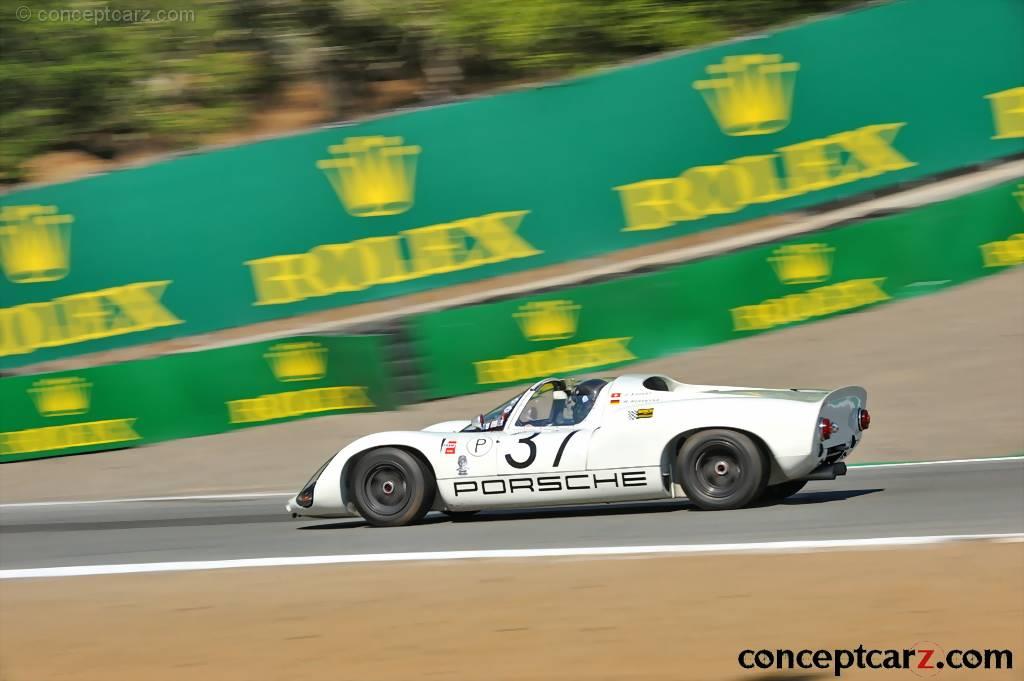 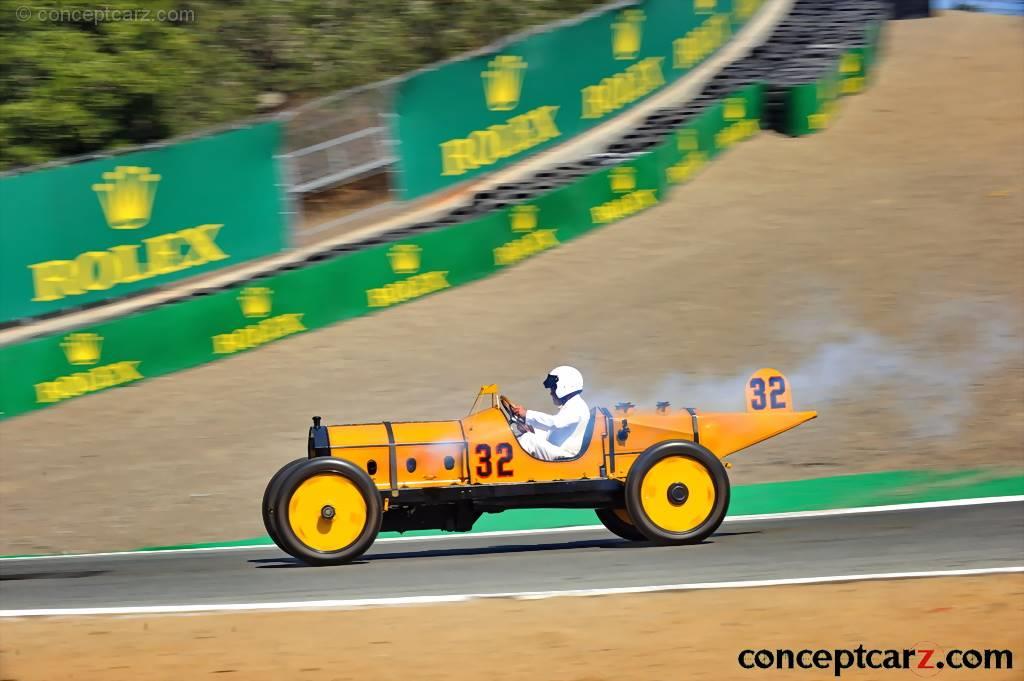 The 1911 Marmon Wasp (chassis 199753) was driven by Ray Harroun to victory in the first Indianapolis 500. Ray started in the 28th position and ran the car at an average speed of 74.602 miles per hour. Ray's Success was attributed to the car being the first single-passenger race car and also the first vehicle of any type fitted with a rearview mirror. Harroun drove the Marmon Wasp again 50 years later at the age of 79 for the 50th anniversary of the Indianapolis circuit in 1961. 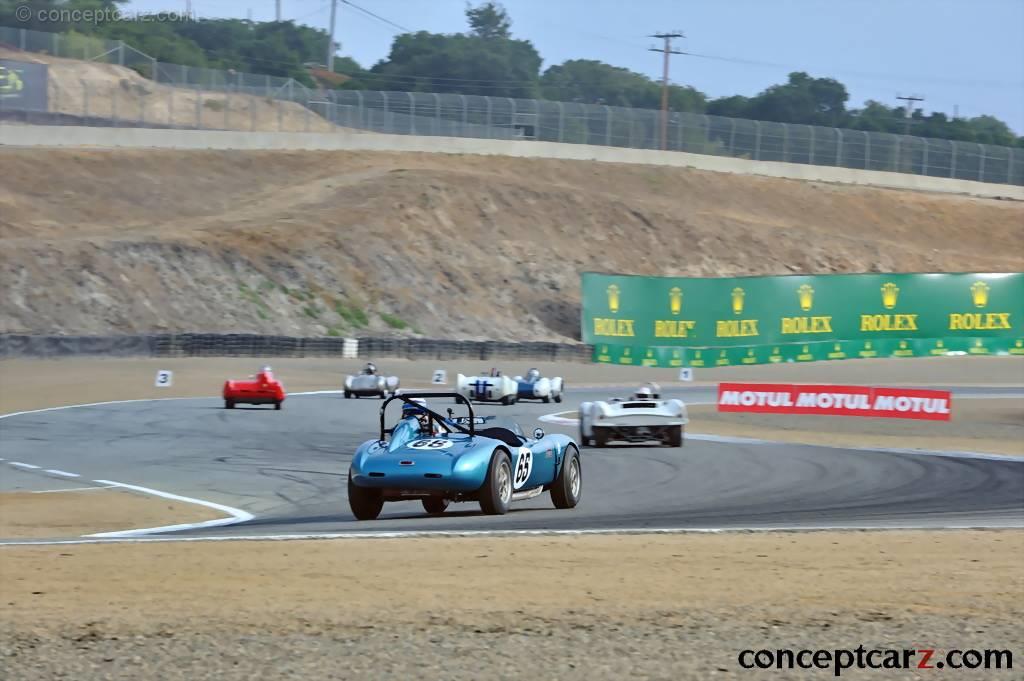 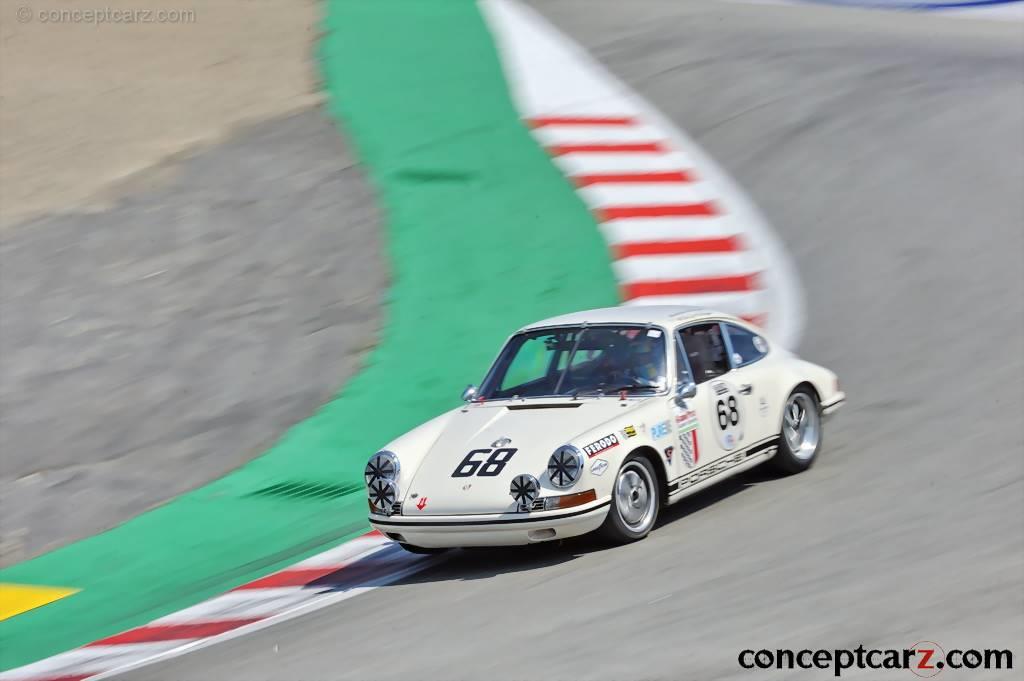 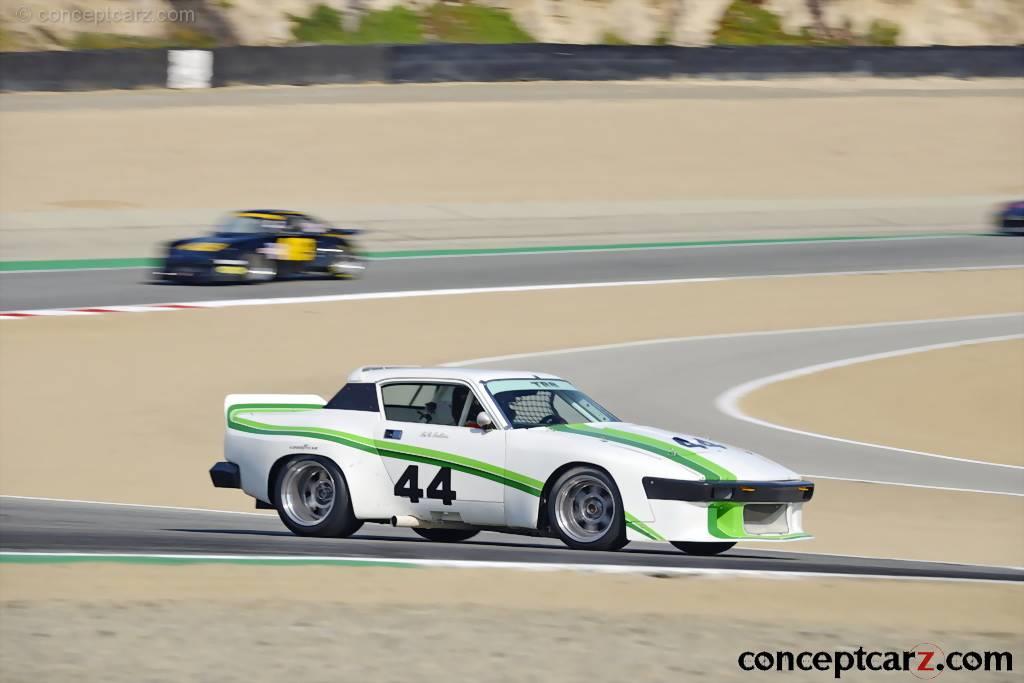 The 1979 Triumph TR8 (chassis 79-289) - One of two TR8s built to compete in the TRANS-AM and later IMSA race series. The car features the Rover-Buick-Oldsmobile-Pontiac aluminum V8 stroked to four-liters and producing just under 400 horsepower. These are the fastest Triumphs ever built and are capable of over 180 miles per hour. 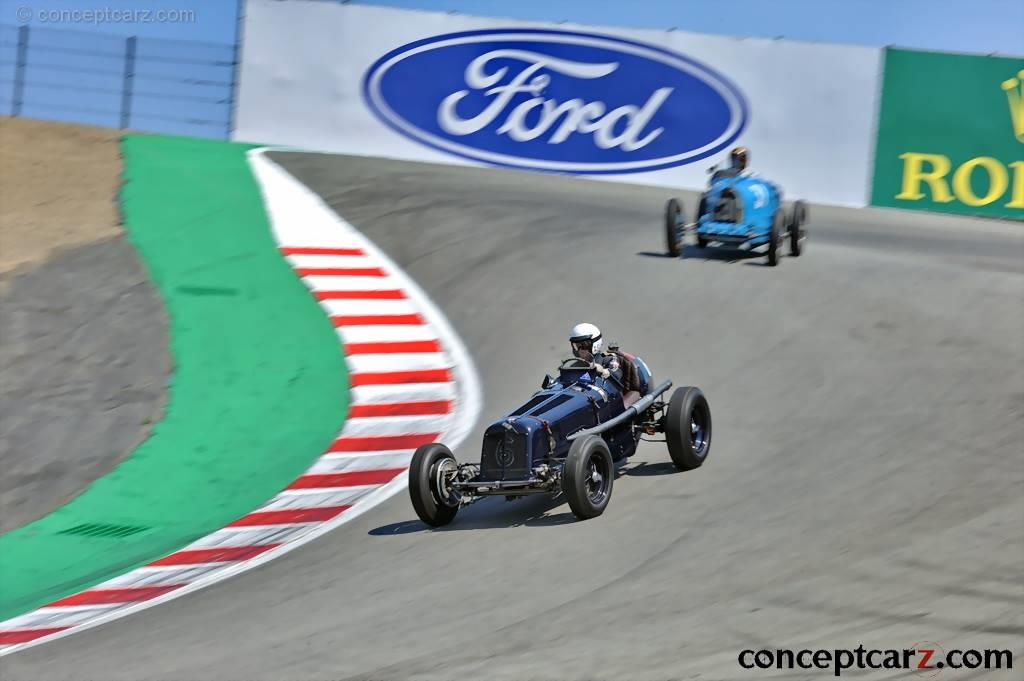 1936 ERA B Type chassis R6B. In 1935 there were thirteen Type B racers created which were campaigned with some success. Lord Howe and Raymond Mays are the more notable drivers who championed their Type B racers to impressive finishes. The Type B was similar in design and mechanical components of the 1934 Type A. Three of the Type B's were further developed resulting in the Type C.