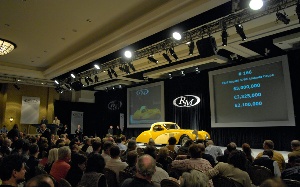 Held January 16th at the prestigious Arizona Biltmore Resort and Spa, it was standing room-only during the single-day event as 122 investment-quality motor cars were presented for auction. The eight-hour sale attracted a record number of bidders from around the world to illustrate continued enthusiasm and interest in the global collector car hobby. As the gavel fell for the final time of the day, total sales surpassed $18 million with a strong sell-through rate of 83 percent of cars sold.

'Overall, our Arizona auction was a very strong sale in terms of sales percentage and was well attended, attracting record bidder registrations . Numerous examples exceeded their pre-sale estimates and many of the cars that some considered to be 'sensitive' in the market sold very well,' said Ian Kelleher, newly appointed President and Chief Operating Officer of RM Auctions.

'There is continued interest in the Corvette Grand Sport and we expect it will change hands in the near future,' he added.

Also attracting significant interest and strong prices was the distinguished, private Atwood Collection, which represented a lifetime of discerning collecting by the late Dr. Barbara Mae Atwood. Comprising of 24 of her most treasured automobiles, the collection included a magnificent selection of pre-war American cars, each representing the epitome of motoring luxury for their respective marques. Highlights included a 1932 Stutz DV-32 Super Bearcat, which exceeded estimate to sell for $594,000; a 1929 Graham-Paige Dual Cowl Phaeton for $297,000 and a 1935 Cadillac V16 Imperial Convertible Sedan for $473,000.

'The Atwood Collection is a great example of the type of private collections for which RM Auctions is known,' added Kelleher.

'Well promoted and received, once again it proved to be one of the strongest areas of the market. The selection of cars and their rarity, coupled with the fact that many had been hidden away and were offered for the first time in a number of years, attracted exceptional values with 80 percent of the cars in the collection selling for above initial estimate'.