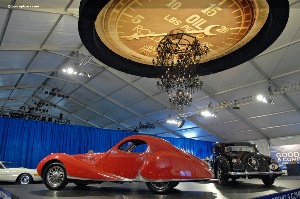 January 2009
Gooding & Company once again delivered the top sale of Arizona Auction Week during their highly anticipated Scottsdale Auction on January 17, 2009. The extremely rare 1960 Ferrari 250 GT SWB California Spider from the newly-discovered VanKregten Estate sold for $4.95 million setting the record for top price of the week at all auctions in the valley as of press time. It is likely the top price ever paid for an un-restored car of its type and represents the second highest price for an individual auction sale in Arizona history.

A very original 1937 Talbot-Lago Teardrop Coupe was the week's second highest lot selling for $3.52 million. As the gavel fell for the final time of the day, total sales neared $31.8 million, with seven cars breaking the magic million dollar mark. The average price paid per vehicle was nearly $400,000.

'Over the years, we've had the privilege of offering some of the world's finest marques, and our record Scottsdale Auction results illustrated that the collector car market is still a valuable investment for connoisseurs and car-lovers,' says David Gooding, President and founder of Gooding & Company. 'We saw that these highly desired and sought-after one-of-a-kind vehicles still demand a premium price.'

The 1960 Ferrari 250 GT SWB California Spider was the star of the VanKregten Estate, and arguably the week. The Italian sports car par excellence is one of only 54 Short Wheelbase examples and one of only a handful of cars fitted with the coveted covered headlights from the factory. More than 20 vehicles from the VanKregten Estate crossed the auction block and were sold without reserve.

The selling price of the 1960 Ferrari 250 GT SWB California Spider is the second highest in Arizona history. This is the second successive year that the Gooding & Company auction sold the highest priced car of all auctions held in the Arizona desert during the week. Last year's record was the 1959 Ferrari 250 GT LWB California Spider selling for more than $3 million.