The 2022 Greenbrier Concours d'Elegance Best of Show trophy, created on property at America's Resort by the glass artists at Virtu Studios, went to Robert Jepson and his beautiful 1936 HORCH 853A Special Roadster by Erdmann & Rossi, wrapping up an amazing weekend and the celebration of the event's fifth anniversary.

The light gray Horch with navy interior in No. 2 of six that were made and one of five still known in existence.

Horch, the German auto manufacturer, was determined to build the world's finest automobile, and specifically to out-do Mercedes-Benz in terms of quality and luxury. Their offering to meet this challenge was the Horch 853A Special Roadster. With a straight eight cylinder engine with five-liter displacement, it was far more expensive than the Mercedes-Benz 540K and requirements to buy such a Horch Special Roadster were also very demanding. 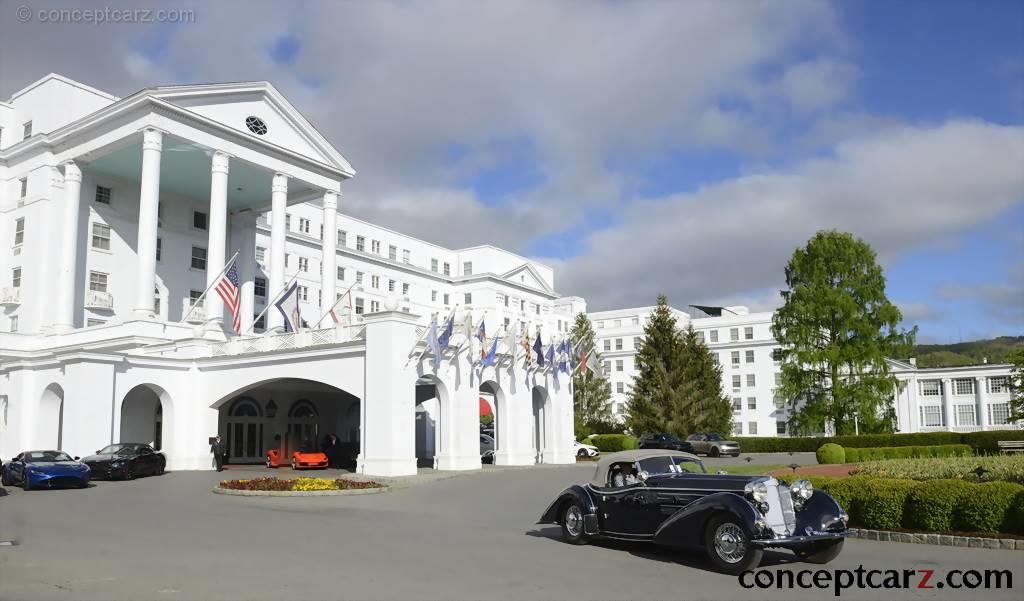 The Best in Show car, with the chassis number 853278, has coachwork by the Berlin-based exclusive coachbuilder Erdmann & Rossi. This Horch was confiscated by the Russians during the occupation of Berlin and found its way to Russia. It eventually found its way back to Germany via Poland after the fall of the Berlin Wall and the Iron Curtain. It was later purchased by a well-known German collector and Erdmann & Rossi specialist, who restored the car in his own restoration shop over a period of more than five years. The result is nothing short of astonishing, as it was restored to the very highest possible standard.

The rare Horch wasn't the only big winner on Sunday. Class champions were named in each of the 10 classes that were showcased on the picturesque show field, surrounding the iconic front entrance at The Greenbrier.

'Every year the judges' decisions get more and more difficult, and this was the most difficult one yet,' said Phil Neff, Chief Judge, The Greenbrier Concours d'Elegance. 'There were so many incredible cars in the field, it was difficult to select the best of the best.'

Class winners, who received Best in Class awards hand blown at The Greenbrier by the craftsman at Virtu Studios, included:

In addition to the class awards, 12 special awards were presented at the trophy ceremony, and the winners received hand-crafted trophies made by the carpenters at The Greenbrier. The awards featured the iconic Springhouse, which has been a symbol of America's Resort for centuries. The winners included:

Sunday's Concours was the culmination of a weekend filled with events for car owners and enthusiasts from across the country.

On Friday, The Greenbrier Concours d'Elegance, presented by Ferrari of Washington, started its engine with The Summit Drive, which took car enthusiasts to the Members Lodge at The Greenbrier Sporting Club for brunch. Following the meal, the cars of all eras and varieties embarked on a drive through mountain roads to America's Newest National Park, New River Gorge National Park and Preserve. There, they enjoyed the incredible views before making the drive to Fayette Station at the bottom of the gorge.

Saturday began with Cars & Cocktails, which featured cars of all ages and types displayed in front of the iconic golf clubhouse at The Greenbrier. Despite some wet weather, owners and spectators enjoyed the show, as well as the ride and drive events presented by Ferrari of Washington and Bentley Washington, D.C. Roy Hardin of MacArthur, West Virginia, won Best in Show at that event with his 1931 Buick Model 8-91.

All of those events served as appetizers for the main course on Sunday, as the finest collector cars in the world were judged by Neff and his qualified team of concours judges. The featured Unrestored Class was so popular that it was divided into two classes, based on the age of the cars.

'We had a little rain the first couple of days, but it didn't dampen any spirits,' said Cam Huffman, a member of The Greenbrier Concours d'Elegance Steering Committee. 'Everyone had a wonderful time, and we were rewarded with a beautiful day on Sunday. The cars were amazing, and spectators and owners alike seemed to enjoy the setting. It was a great celebration of five years, but we're already looking ahead to next year.'

Plans have already begun for The 2023 Greenbrier Concours d'Elegance. The featured class, Cars of the Packard Motorcar Company, will be just one of the major attractions for next year's event, which will be held May 5-7. Registration is already open for the Sunday Concours at GreenbrierConcours.com.