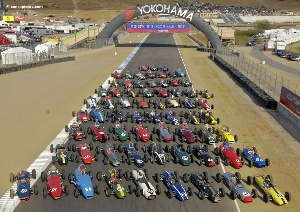 September 2008
Some of the greatest automotive racing cars in history make the annual journey to Laguna Seca in August for several intense days of racing. The cars that circle the scenic course are worthy of display in museums; in fact, many of the cars are the center piece of exhibits when they are not turning laps at one of the more challenging course in the United States. The Monterey Historic Races evolved from road racing in the Del Monte Forest north of Monterey, California during the early 1950s. In 1956, due to complaints and growing safety concerns, racing through the Forest was banned. So the activities were moved to the Laguna Seca Raceway located just miles away. This year, the track celebrated its 50th year of operation with the Monterey Historics being apart of the track for the past 35 years.

Mario Andretti is one of the greatest racing drivers of all time and is often considered the 'most successful all-rounder.' He has racing victories in Formula One, IndyCar, World Sportscar Championship and NASCAR. Other career victories include races in midget cars, sprint cars, and drag racing. During his racing career, Andretti won four IndyCar titles, the 1978 Formula One World Championship, and IROC VI. he is the only driver ever to win the Indy 500, Daytona 500, ad the Formula One World Championship. In recognition of his many accomplishments, the Monterey Historics gave Andretti several solo hot laps in the 1978 Formula 1 World Championship winning Lotus 79.

Formula Junior was a single-seater racing series started by Count Giovganni 'Johnny' Lurani and intended for young and inexperienced drivers. It was a way for gaining experience in the racing environment while using inexpensive components from ordinary automobiles. The series lasted for only a few years, but in modern times, it has regained popularity and are often seen at many major events. Then and now, the series provides aspiring racers an opportunity to compete in stiff competition. The 50th anniversary celebration had three dedicated classes for the large field of Juniors, consisting of over 70 entrants. One category was reserved for the mid-engined cars, another for Italian built constructed between 1958 and 1960, and the final category for other cars built between that period.

Sunday's activities began with a parade of Alfa Romeos. Many of the racing cars created by Alfa Romeo during their vast history could also be seen in many of the fifteen categories. Following the Alfa parade, were the individual races between 1955-1966 Production Sports Cars, 1967-1978 Historic F-1 Cars, and 1972-1983 Historic IMSA Cars.

Special Displays
Enhancing the appeal of the Monterey Historics was the consumer expo featuring a variety of activities and displays for fans to experience. Included in the display was the 'Toyota Story: Past, Present and Future' exhibit in the infield expo area. It featured the soon-to-be-released Toyota Venza along with a group of historic Toyota race cars such as Cristiano da Matta's CART championship car, Scott Dixon's IRL championship car, one of Ivan Stewart's desert racing trucks and other significant Toyota racers.

ICON Aircraft displayed its A5 amphibious light-sport aircraft prototype, which made a successful maiden test flight on July 9.

A popular attraction in the paddock area was the Rolex 'Moments in Time' display, honoring the singular achievement of a car and driver in racing history. The award-winning collection features a range of significant cars with a focus on the early to mid 1900's.

Highlighting the display is the 1938 Alfa Romeo 8C-2900B Mille Miglia Spyder that Phil Hill drove to first place in the Del Monte Trophy Race in 1951 at Pebble Beach, which is currently part of fashion designer Ralph Lauren's collection.

The 1908 Grand Prix Mercedes, a car that remains in original condition with all its original body panels, engine, transmission, and chassis components, was also on display. It is one of the most authentic Grand Prix race cars in the world and is truly a masterpiece of old-world craftsmanship.

The race is one of the more exciting features of the weekend, as the drivers traverse the course with little regards for the course, the car, or the other drivers. Instead of following the white lines through the corkscrew, they opt for the straight line through the dirt on the inside of the entry and continue on through the gravel. Unlike last year, there were no major accidents this year. However, there was much cleanup required after the race to remove the sand, debris and gravel from the course.

The winner of the race was Timo Glock who was seen later in the day driving the Toyota-Eagle Mark III GTP car in parade laps.

Conclusion
The Monterey Historics is one of the greatest venues for historic racing on the calendar. It spans every decade of racing from the birth of the sport to the mid-1980s. It encompasses many of the popular racing series that entertained spectators and made legends of those who raced. With breath-taking scenery, wonderful weather, and plenty of octane, the 2008 edition of the Monterey Historics was an entertaining and enjoyable event.
Galleries
Pre-1940 Sports & Touring Cars