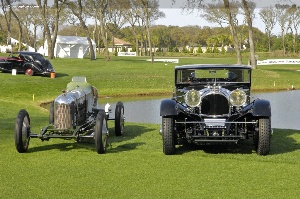 March 2009
Off the coast of Northeast Florida on a secluded island, stands the Ritz-Carlton Hotel, home to the Amelia Island Concours. The vehicles are arranged on 10th and 18th fairways of the adjoining golf course offering breathtaking views in all locations. Now in its 14th year, the Amelia Island Concours d'Elegance has become one of the premier events of its kind in the nation.

This year's concours was a resounding success and, as stated by numerous show-goers, 'keeps getting better every year.' In the current economical climate, it was natural to expect less: smaller crowds and fewer entrants. This was not the case. The numbers of entrants and the quality of their vehicles were truly remarkable. The steady stream of enthusiasts kept the well-manicured greenery covered for most of the day. It was very evident that the story of the automobile, its history, heritage, and contributions to the economy, growth and nation's freedom will continue to be told, even in these challenging times.

This year's event celebrated the world renowned coachbuilder Bohman & Schwartz as well as a pair of 50th anniversaries for significant races at Sebring and Daytona. Veteran racer David Hobbs served as Honoree for concours. 'We've known each other for a long time and I have watched David put in some of the most spirited drives ever of any racer. His work today for SPEED is fantastic and he always manages to educate as well as entertain with his race commentary,' said Bill Warner, Concours founder and co-chairman.

The Southern California based coachbuilder, Bohman & Schwartz, was among the pinnacle of the trade, and the entries in this category at the concours were truly indicative of their capabilities. The list included vehicles with coachwork that were updates to existing bodywork, complete bodies, and even the radical, one-off, pre-War front-wheel drive Phantom Corsair. The Corsair was designed in a wind tunnel and a drastic departure from contemporary design practices. The running fenders were fully integrated; it was low, long, and wide, and there were no running boards. On concours day, this celebrated vehicle was given prime real-estate on one of the highest points of the show field for all to see. The judges chose the Duesenberg Model SJ owned by Sam and Emily Mann as their favorite and most deserving of the 'Best in Class' award.

Sitting directly in front of the 'Best in Class' Duesenberg Model SJ, was a category called 'Giallo Fly,' meaning 'Yellow Italian Cars.' The six cars in this category had several things in common. All were two-door coupes, all were from Italy (four Ferraris and two Maseratis), but the most noticeable feature were their yellow paint schemes. It was an absolutely brilliant category with the only question remaining being 'Who thinks up this stuff?'

The Rolls-Royce Silver Ghost category remained in its usual location, welcoming show-goers as they entered the gates. Included in this group were six Ghosts that ranged from 1910 - 1926. In the European Classic Post-War category, further work of the Rolls-Royce Company could be found, including the Phantom II and Phantom III, and the Bentley Mark VI and S1 Continentals. Several other manufacturers were given their own categories, such as Ferrari, Porsche - honoring their 4 cam cars, Mercedes-Benz, Duesenberg, and American Austin/Bantam.

The Art Deco category had two vehicles that shared a similar lineage: the Chrysler Newport and the Chrysler Thunderbolt. In the early 1940s, Chrysler commissioned LeBaron to construct six of each with intentions of using them on the national show circuit. LeBaron was given a mere 90 days to complete this task, which was nearly accomplished with five examples of each concept created. The Thunderbolt in attendance is one of just four left in existence; the Newport had the honor of pacing the 1941 Indianapolis 500 and was the personal property of Walter P. Chrysler, Jr.

There were two categories for Horseless Carriages with one being reserved for cars that had 40+ horsepower. There was a Vintage category and several American Classic categories, further organized by 'Open' or 'Closed' bodies and by year of production.

In total, there were over 30 categories that displayed the history of over a hundred years of automobile evolution. Of these, nearly one-third of the groups were reserved for racing or sports cars, a clear indication of the Concour's admiration of motorsports.

Racing at Amelia
In keeping with the Amelia Island Concours' love of racing, there were many categories featuring race, GT and sports cars. There were categories celebrating the Group 44 cars, Cars of David Hobbs, the 50th anniversaries of the first US Grand Prix Formula One race at Sebring International Raceway, and the 50th anniversary of Indy Roadsters at Daytona. The Sebring and Daytona events held 50 years ago were a very important part of history for auto racing even though each was run only a single time. The experiment with having Indycars at Daytona was short lived due to the incredibly high speeds and the dangers involved. Over a half-dozen cars were exhibited in this category.

Cars of David Hobbs
Sitting a short distance away from the Indy car display were the cars raced by David Hobbs, highlighting a career that was truly diverse. His international career spanned nearly 30 years and included sports, touring, Indy, IMSA, Formula 1, NASCAR, and Group C endurance racers. Hobbs won the 1971 U.S. Formula 5000 championship and 12 years later added the 1983 Trans-Am Championship to his trophy case. He was a regular competitor at the 24 Hours of Le Mans, appearing 20 times and making it to the podium on three occasions. He drove for a wide variety of manufacturers and teams, including BMW, McLaren, BRM, and Honda. The cars in this category included a pair of Ford GT40's, a McLaren M10B, Surtees TS5A, Lola T310, Ferrari 512M, and several others. The 1968 Ford GT40 owned by Bernard Carl was chosen as Best in Class and the car David Hobbs drove onto the show field in early morning, kicking off the day's activities.

Concours d'Elegance
Whenever there is a category reserved for 'Duesenbergs', it is nearly impossible to predict the winner. Adding to the impossible task were the two categories for European pre-War classic cars, European Custom Coachwork, and the Cars of Bohman & Schwartz. There were four categories for American Classic cars, but with the Duesenberg group championing the elite of American coachwork and technological accomplishment, it was a long-shot that judges might select from these groups.

The Bohman & Schwartz category, especially the three Duesenbergs and the Phantom Corsair, were strong contenders. The European Custom Coachwork category included remarkable talents such as Delage, Talbot-Lago, Delahaye, Bugatti, Isotta Fraschini, Amilcar, and Voisin. They were as elegant as they were exotic. The largest vehicle in this group was the Isotta Fraschini with its custom body created by Carrozzeria Italiana Cesare Sala of Milan. Sitting lowest to the ground was the Voisin C20, thanks to its underslung chassis. The most eye-catching car had to be the Delahaye 135 MS with bodywork by Faget-Varnet, and its striking two-tone paint scheme. The other two Delahayes in this category wore coachwork by Figoni et Falaschi, perhaps one of the most admired and respected coachbuilders of all time.

As the day wore on and the sun continued to shine overhead, the Best in Class winners were revealed with each car parading in front of the spectators and judges to receive their much-deserved trophy. Since Best of Show is chosen from the list of Best in Class, the duties of predicting the winner became slightly easier as the front-runners were revealed.

The most elegant and deserving of Best of Show was awarded to the 1931 Voisin C20 Demi-Berline owned by The Munder Collection. It is a beautifully restored and elegant car that is as mechanically appealing as it is breathtaking. It is powered by a rare V12 engine with sleeve-valves mated to a four-speed gearbox. The engine produces over 110 horsepower, which is more than adequate to carry this lightweight, aluminum art-deco vehicle to speeds reaching 150 km/h. It has a Demi-Berline style coachwork and was given the code-name, Mylord. The underslung chassis carries two-door saloon coachwork by Gabriel Voisin and is the only known survivor. It is believed that fewer than 100 Voisin-built cars still exist with this car being the most important and most valuable.

The Concours de Sport, on the other hand, is a wide open field, selected on the merits of racing accomplishments, contributions to the sport, and the one regarded as 'the top racing vehicle.' The cars at the show span decades of racing and range from dirt track racers to F1, and from Trans Am to Indy.

In the end it was the 1923 Miller Special 122 Supercharged owned by A. Dano Davis that was chosen as the most deserving for this coveted award. The car features a 122 cubic-inch straight-eight, twin-cam, dry-sump engine designed and created by such legendary individuals as Leo Goossen, Fred Offenhauser, and Harry Miller. The car would dominate American racing for the next two years, winning the 1924 Indianapolis 500 race, and racing with much success well into the 1950s. This 200 horsepower car set numerous land speed records over the course of its life time.

Conclusion
2009 was a challenge. It was a challenge to believe that this year's event could compete with prior years, considering the current economical concerns. As the exhibitors entered the field, followed a few hours later by the spectators, it became instantly clear that the organizers, sponsors, volunteers, and everyone involved, are capable of the unthinkable and the unimaginable. This was truly an epic event.

For the 14th year in a row, the Amelia Island Concours paid tribute to the greatest and most elegant cars constructed, and the racing accomplishments and ingenuity of the cars that fought bumper-to-bumper for the checkered flag, and the road-going designs that inspired generations.

The three-day event, including the concours, an auction by RM Auctions, and numerous other activities, attracted an estimated 15,000 to 16,000 people. In years past, the show field included as many as 324 vehicles. This year there were around 250 cars present that spanned seven countries.

With a breathtaking location, some of the most knowledgeable, qualified and seasoned judges in the industry, and the talents of the organizers, it appears the Amelia Island Concours will continue its reign as one of the nation's most ground-breaking vintage automotive events.

50th Anniversary of USGP at Sebring