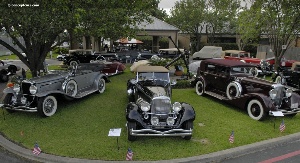 May 2009
The 14th Annual Keels & Wheels Concours d'Elegance was held at the Lakewood Yacht Club in Seabrook, Texas, and showcased an incredible array of automotive and boating classics. It is the largest classic car & boat show in the country. The featured marque was Duesenberg, considered by many as the finest American automobile ever built. The other feature was The Cars of Carroll Shelby, revered among race and muscle car enthusiasts.

The Lakewood Yacht Club location is tranquil and picturesque. Yachts, sail boats, and motor boats rested in the peaceful marina and the large protected inner harbor. Overlooking the water is a Bermuda-style clubhouse, situated on 35 acres, with a swimming pool, patio, and tennis courts. The show cars were positioned in both the front and back of the clubhouse, taking full advantage of all available greenery.

The Keels & Wheels Concours is similar, in many ways, to other concours events, but also very different. Most events allow only one day to enjoy the vehicles, the Keels & Wheels concours gives onlookers several days of admiration. Many of the cars were brought two days before the concours and positioned on the show field. Since this is a multi-day event consisting of a concours, boat show, and concours, it allowed visitors plenty of opportunities to leisurely enjoy and learn about the cars.

The Classes
Several marques were given their own categories, including Rolls-Royce, Triumph, Porsche, Ferrari, two categories for Jaguar, Mercedes-Benz, and Duesenberg. Morgan, celebrating its 100 years as a marque, was given its own category. Corvette and Thunderbirds were each given their own separate categories.

Greeting visitors as they entered the Yacht Club was a nice collection of Rolls Royce automobiles. Just beyond them were the Pre-War cars with the earliest example being a 1905 Cadillac. On the opposite side of the road were the American Muscle Cars from the 1960s and 1970s.

The 'contemporary' category had several rare automobiles including an Alpina Z8, Bugatti EB110SS, and a Callaway modified Alfa Romeo GTV6. Directly across from the Contemporary category were the Cars of Carroll Shelby. This was a very impressive field of cars, including many rare and unique GT350 and GT500's.

Vehicle Spotlight
The Detroit based Everitt Company produced cars for only a short time, lasting from 1910 through 1912. It was formed by two of the three individuals who had created the E-M-F Company. At Keels & Wheels, one of the few remaining Everitt Touring Cars still in existence was on display. Another vehicle in attendance that is one of the few survivors was the 1926 Jordan, making its restoration debut. The Jordan marque produced cars from 1916 through 1931 with around 43,000 examples produced during that period.

With Carroll Shelby being from Texas, it was only natural to expect that some of his greatest creations would still reside in that state. The Concours paid tribute to his cars this year, and certainly brought out some of the finest GT350 & GT500 cars still in existence. Other cars in attendance sharing the same muscle car persona included a pair of Plymouth Road Runners, an absolutely stunning Oldsmobile 442 W-30, a GTO, Camaro Pace Car edition, and a Pontiac Trans Am. In the high performance European category, there were several Maserati's, Ferraris, and Lamborghini's that certainly made the grade. The Lamborghini GT400 was the first car totally designed and built by Lamborghini. There were less than 250 examples of the 2+2 produced during the two years of production, making the one in attendance even more special. The two other Lamborghinis to grace the concours lawn were both mid-engines cars - a 25th Anniversary Lamborghini Countach and a Lamborghini Diablo. Sitting in close proximity were two other mid-engine cars, both hailing from the same marque, the Maserati Bora and the Khamsin.

The SS90 was the first true sports car produced by Jaguar and only 23 examples were produced before the SS 100 was built. A very brightly colored SS90, finished in blue with matching wire wheels, sat among other Jaguar cars on concours day.

Since this is a car and boat show, organizers invited cars that were inspired, in part, by water going vessels. This included a 'Woodie' car category, and two amphibious vehicles, a 1964 Amphicar and the other, a modern-day vehicle called the WaterCar. Visitors were given a demonstration of the WaterCar's abilities, as it drove from land into the water, and soon had accelerated to its top water-going speed of over 55 mph.

The Awards
The awards ceremony was held in the air conditioned Worldwide Group Auctioneer tent. Most of the recipients of awards walked to the front of the stage to receive their award. Best of Class, Best of Show, and People's Choice award winners had the honor of showcasing their cars in front of the onlookers by driving their cars across the auction block. The entire ceremony lasted an hour (two at most), rather than the traditional 3 or 4 hours at most events.

The visitors to the concours collectively chose the brightly colored, Peugeot 402 Darl'Mat Roadster as their favorite vehicle in attendance, earning it the 'Peoples Choice Award'. This award was made even more special when considering the competition, which included the Duesenbergs, an Isotta Fraschini, and a pair of Delahayes.

A total of 104 Peugeot 402 Darl'mat Special Sport Roadsters were crafted on the 402 chassis. They were upgraded at Darl'mat's shop with Cotal four-speed electro-mechanical gearboxes, before being shipped to Pourtout and fitted with the Paulin-designed bodies, formed from pieces of sheet aluminum hand-shaped and then nailed to wooden structures of ash framing that were then attached to the chassis.

Three Darl'mats finished in the top 10 overall at the 24 Hours of LeMans in 1937. Approximately 30 still survive today. Similar to the 1937 Le Mans cars, it is powered by a four-cylinder engine with unique tuning advances developed by Emile Darl'mat.

Next, it was the judges' turn to choose their favorites, one for an American built car and the other from Europe. In the European category, they selected the Delahaye Type 165. It is one of only two built and is clothed in coachwork by Figoni & Falaschi. It was chosen by the French Government to represent France at the 1939 New York World's Fair. In the American Category, the judges selected the 1935 Duesenberg Model SJ LaGrande Dual Cowl Phaeton as their favorite. It has a fresh restoration, completed in 2003, and remains in superb condition. It features the coveted supercharged version of the Lycoming straight eight engine which offers an impressive 320 horsepower.

Conclusion
Seabrook Texas, located just outside of Houston, was badly damaged in 2008 by Hurricane Ike, and there were still remnants of its destruction. Much of the news circling the Houston and Seabrook area during the time of the concours did not center on cars or boats, but rather on the 'Swine Flu.' Many schools had been closed, airports were on high alert, and many social gatherings were canceled. Thankfully, the concours and auction did proceed as schedule and was a reminder of better times. It was a peaceful distraction that showcased some of the greatest road- and water-going creations ever to be created.
Galleries
Keels
Duesenberg