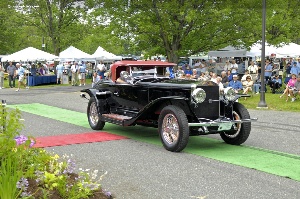 June 2009
1990 was the inaugural year for a modest automobile show, organized by a group of volunteers and Members of the Board of Directors of the Burn Prevention Foundation, and held on the grounds of the Penn State Berks Campus. Its purpose was to assemble automobiles and people while promoting a message of preventing serious burn injuries through education. After twenty years, the event continues, and so does it message. Over $3.2 million has been raised during that time with approximately $1.2 million going to support the charitable programs of the Burn Prevention Foundation.

After just six years, the concours had outgrown its location and moved to Lehigh University's Mountain Top Campus. Ten years later, in 2006, it moved again to its present location at Northampton Community College.

Over the years, the concours has evolved dramatically and reached national prominence among concours events and continues to lure top collectors and large crowds. With two decades worth of history, it is one of the oldest continuously celebrated concours events in the United States, and the oldest concours on the east coast.

For the 20th Anniversary Celebration, nearly half of the automobiles exhibited were former top trophy winners from the show's past.

The Categories
The categories in which the cars were grouped were nearly identical to the past years. There were classes for the Brass and Classic Era automobiles, which housed the oldest examples on display. Muscle, Performance, Sports, and Contemporary Super Car categories were responsible for some of the widest smiles of the day, especially when the cars were started and brought in front of a seated audience. Many of the owners gave demonstrations of just how fast the tires could spin. The Wood Body category displayed a multi-faceted level of craftsmanship, convincing steel and wood to work in harmony. The eclectic 'Specialty' category housed two three-wheeled micro cars, a concept car, an early prototype, and several other unique creations. Equally as diverse was the 'General' category, which ranged from a 1917 Stanley Steamer to a 1956 Rolls-Royce Silver Wraith, and from a Crosley Hotshot to a Chevy Chevelle Malibu. New this year was the 'Preservation Unrestored' category, which has become increasingly popular at many other concours events. Though the cars in this category are far from perfect, they give an unrivaled realization of their age and tell a story with every ding, dent, scratch, and rust spot.

The Cars
One of the oldest vehicles in attendance was a 1903 Marr Runabout. It is the only known survivor and was used as a prototype for the first production Buick's. Sitting in close proximity and appearing to be much older, was the 1908 Economy Model B. It rides on large wooden artillery style wheels and has a design similar to a horse drawn buggy, and has been in the same family ownership since 1915. One of the best representations from any one manufacturer of the Pre-WWII era was surprisingly the Stanley Steamer, with five examples on display. The models ranged from 1903 Model C runabout to a 1917 Model 728 Touring Car.

The vehicle with the largest engine in attendance could easily have gone to the Pierce-Arrow Model 66A. Under its long bonnet is an 825 cubic-inch (13.5-liter) six-cylinder powerplant which is capable of producing 140 horsepower. The honors for the most powerful engine in attendance would probably go to the 700-horsepower Callaway C16 Corvette with honorable mentions going to the 6.2-liter LS9 small-block powered 2009 Corvette ZR1, which produces around 620 horsepower.

The Muscle Car Category had many classic favorites such as the Pontiac GTO, Chevy Camaro and Chevelle, Plymouth Road Runner, and the Buick Gran Sport. Most of the vehicles in this category had engine displacement sizes well above 400 cubic-inches.

The Sports Car Category included many European novelties such as the Jaguar XK-120, the 356 Porsche, the MG TD and TC, Ferrari 275 GTB/4, and the Austin-Healey 3000.

The Awards
Judging at the Eastern Concours of the US is done using the 'French Concours' rules, which basically means the cars are judged on the visual impact they make, also known as the 'wow' factor. Other criteria add to the cars final score, including condition, authenticity, restoration, rarity and historical importance. The primary factors, however, are the car's style, beauty and elegance.

Taking the 'wow' factor to another level is the collective voting for best car of the show based on the visitors to the event. This award is known as the 'People's Choice Award', which could be considered just as prestigious as the 'Best of Show'. This year, the people chose Timothy Durham's car as their favorite. Last year, Mr. Durham's Duesenberg won 'Best of Show' honors, and this year his 1933 Auburn Salon Convertible Coupe with Retractable Roof stole the hearts of the public, earning him the coveted 'People's Choice Award.'

Every car in attendance was driven from the show field and paraded in front of the audience. As each car passed in turn, the Master of Ceremonies announced the vehicle's history, detailing its significance and the role it played in shaping the foundation of the automobile industry. If the car was selected by the judges to win an award, it was presented to the owner at this point. With over 140 vehicles in attendance, this is a long, yet educational, process. The last vehicles to cross in front of the judges and the audience were the major award winners, including the Rolling Sculpture Award, the Chief Judges' Award, Grand Marshal's Award, Burn Prevention Foundation Board of Directors' Award, People's Choice, and Best of Show Award. This year, the final vehicle in the parade and the recipient of Best of Show honors was the 1927 Isotta-Fraschini Tipo 8A S Roadster owned by Joseph & Margie Cassini, III. It is an amazing vehicle in every detail and was the recipient of Best of Show at last year's Meadow Brook Concours. It was truly the most elegant car in attendance and the most deserving of this prestigious award.

Conclusion
The concours has survived for two decades due to the hard work and dedication of the volunteers and all that are involved. It has become a world class event and one that is anxiously anticipated each year by both spectators and exhibitors. This year's list of cars was truly exceptional; it was an educational and enjoyable event and one that could easily weather another twenty years. Congratulations on the big 'two' 'oh'.
Galleries
Brass