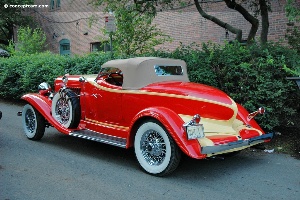 June 2009
The Greenwich Concours d'Elegance is a two-day affair that showcases American cars on one day and International cars on the second day. Both days highlight a grand array of vintage, classic, sports, touring, competition and collectible automobiles from the turn of the century to the present. Many of the vehicles are one-of-a-kind, limited production, or were custom-built for affluent customers. The event is held at the Roger Sherman Baldwin Park, in Greenwich, CT and includes vintage motorcycles, and an in-the-water display of vintage boats.

The 14th consecutive edition of the Greenwich Concours was blessed with nice weather. The day before the event, however, had been a steady stream of rain. This downpour was responsible for the cancellation of the Yankees game in New York and left the Concours show field very muddy in places. The area just outside of Bonhams' Auction tent also had its share of the mess, slowing down spectators as they came to view the roughly 90 vehicles up for sale.

The concours responded accordingly, doing all they could to make the walkways passable and keep the driving lanes moving for the cars coming onto the field. Considering there were nearly 150 vehicles on the roster for day one, (some of them among the heaviest cars ever created) the event organizers did a marvelous job at rectifying the mud problem. Regardless of weather conditions, the event has taken place every June since 1996 - rain or shine.

The Vehicles
One very interesting aspect of the show was that a vehicle from every decade of American production from the early 1900s to present was on display. There were two vehicles from the 1980s on display, a Delorean and a Cadillac Seville. From the 1990s, there was a Corvette and a Camaro. Modern supercars, including an Alfa Romeo 8C, Bugatti Veyron, and Ferarris and Maseratis satisfied the current decade. A few cars from the Muscle Car Category were created in the 1970s, as was the 1973 Buick Estate Wagon. The Estate Wagon may have looked a little out of place (as did several other cars) among the many elegant and rare automobiles, but it greatly enhanced the educational experience of the event. The Buick was not the only station wagon on display as it was joined by several Woody Wagons and Bel Air Nomad Wagons of a similar design. Again, it was interesting to note the evolution of this particular design.

Some of the finest American automobiles ever produced were done by Cadillac and Packard. As such, there was a wide selection of vehicles from both of these manufactures, with Packard having over a dozen vehicles on display from the pre-WWII era. One of the more breathtaking Packards on the field was the 1934 Packard Twelve Aero sport Coupe with coachwork by Lebaron. It is one of four built and the only one with no rear quarter windows. It is estimated that each of the four coupes produced were priced at $18,000, making them among the most expensive vehicles of their era. Sitting close to the Aero Coupe was another LeBaron bodied Packard - a Phaeton - of equal beauty.

The most elegant Cadillacs on display were the V16 models. There have been only a few companies to create a V16 production engine and Cadillac was the first. They were followed by Marmon a short time later. One of the Marmon Sixteen models was in attendance, having just recently finished its restoration. The restoration process was a difficult task due to a fire that had severely damaged much of the rear of the vehicle. The restored car showed no signs of this tragedy and it was evident that the labor of love that brought this car back to original condition was done to very high standards.

'You can tell a book by its cover' may apply to many scenarios, but it certainly did not translate to the 'wolves in sheep's clothing' in the muscle car category. The Camaro looked like most other Camaros, except for when the hood was raised revealing the 427 engine. (Well, the bulge in the car's hood did give an indication that something big lurked underneath). It was soon evident that every car in this category was a 'Sleeper Car.' The exteriors looked little or no different from a standard car, but internally they had been highly modified for performance.

Fighter aircraft, particularly the twin-tailed P-38 Lightning, were responsible for the dramatic tail fined styling that encompassed the 1950s and 1960s, peaking between 1958 and 1960. Greenwich had many examples of these automobiles positioned throughout the show field. Two especially impressive displays were the pairing of the 1959 and 1960 Cadillac Eldorado - the fins of the 1959 Cadillac Eldorado were the largest and most outrageous ever fitted on a production car. The drastic changes to the fins during these two years were well appreciated and a rarely seen sight.

Best of Show
It was very difficult to foreshadow the Best of Show winner at Greenwich. The two most impressive cars on the field were both Duesenbergs, one was a Rollston bodied Convertible Victoria and the other was a LaGrande Phaeton with two-tone paint work. The most eye catching car on the field was the Auburn 12-161A Boattail Speedster wearing period colors. Apart from its attractive body style, the paint colors were very alluring and inviting. It was this attention-getting appeal that helped E.L. Cord, president of Auburn Automobile Company, sell his vehicles. Sitting close to the Auburn was a Cord L-29 Dual Cowl Phaeton. Considered by experts to be the ultimate classic design, the 'dual-cowl phaeton' was out of style by 1930 due to its impracticality; but the design was continued on custom-ordered cars.

The two LeBaron bodied Packards were certainly elegant and very unique. The Sixteen-cylinder Cadillacs and Marmon were certainly in consideration, employing both mechanical superiority and graceful designs.

Top honors were bestowed upon the brightly colored, twelve-cylinder Auburn 12-161A Boattail Speedster owned by Joseph and Margie Cassini, III. Last year, Mr. Cassini won Best of Show (International) honors with his Isotta-Fraschini at Greenwich, a car that has won numerous awards, including at Meadowbrook and the Eastern Concours of the United States.

Conclusion
Day one of the Greenwich Concours was both educational and entertaining. With around 150 cars on display, plus nearly 100 cars under the Bonhams' Auction tent, it was a great start to this two day celebration.
Galleries
Antique and Vintage