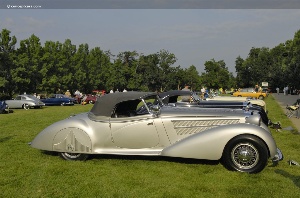 July 2009
The 32nd Annual Ault Park Concours d'Elegance, held in the city of Cincinnati, Ohio, had over 230 rare and historic vehicles in the scenic gardens of Ault Park. 'We had an amazing event this year, particularly considering the current economic conditions. Not only did we have record attendance for Sunday's Concours, our Friday night fundraising event and Saturday countryside tour and garage party were extremely well-attended' said Sue Willis, Executive Director of the Cincinnati Concours d' Elegance Foundation.

This years event celebrated 'Excellence in German Design and Engineering,' land speed record vehicles, and Morgans 100th anniversary. There were five classes representing the featured theme, including racing, sports & touring, and contemporary cars from the pre- and post-War eras. In the Morgan class, were over a dozen examples representing many of the models produced during their existence. On January 2, 1904, Charles Schmidt drove the lightning-quick Packard Gray Wolf, at 1,430 pounds, to a new five-mile record of 4:21.6 minutes, in the medium weight category. The Packard Gray Wolf made a rare trip from its museum home to attend this year's concours. It was one of the oldest cars on display.

The Vehicles
The organizers did a superb job of assembling a wide variety of vehicles capable of capturing the interests and admiration of the young and old alike. One section of the field was reserved for Collector and Performance American cars ranging from the mid-1940s through the early 1970s. One of the highlights in the performance category was the 1969 Chevy Chevelle with the Yenko Sports Car Conversion Package. It is one of only 99 COPO/Yenko Chevelles produced. Best of Class honors went to the 1969 Dodge Coronet Hemi Super Bee owned by Tom James of Cincinnati, Ohio. It is one of 29 Hemi Super Bee's built in 1969 and is powered by a 426 cubic-inch engine offering 425 horsepower. In the Collector American category, Best of Class honors went to a 1964 Ford Mustang Convertible owned by Nick Ferry of Cincinnati. The Mustang beat several worth contenders, including a Packard 400, a Tucker Torpedo, Cadillac Eldorado Biarritz, and a Muntz Jet Sports Convertible.

Greeting visitors as they arrived were the Sports Contemporary, Collector Foreign, Collector Asian, and Sports-Classics. In contrast to the American Performance and Collector cars, the cars in these categories were much smaller in all respects, including width, height, length, and wheelbase. Small, nimble vehicles such as the MG J2, MG TC, Allard J2, Austin-Healey, and Austin Seven lined the field. Exotic Briklins, Ferraris, Jaguars, and Lamborghini's completed most of the Sports Contemporary category, with Datsun, Nissan, Mazda, and Acuras representing the Collector Asian category. A 1972 Ferrari 365 GTC/4 took Best of Class honors in the Collector Foreign category, beating out an amazing Lamborghini 350 GT Coupe and a Lamborghini 400 GT 2+2.

The upper section of the Ault Park field housed the Antique, Early Classics, and pre-War vintage automobiles. In the 'Antique through 1924' category, the judges selected the 1904 Premier Model F as their favorite. It is one of only two extant and one of the earliest vehicles ever created from this short-lived manufacturer. Hallmark names such as Packards, LaSalle, Auburn, Franklin, Cadillac, Cord, and Lincoln made up most of the Pre-War and Classic vehicles. It was a fine assortment of open and closed vehicles ranging from touring cars, to coupes, to convertible sedans.

The very eye-catching 1933 Auburn Salon Convertible Retractable Roof owned by Timothy Durham of Indianapolis, IN was awarded with the Cincinnati Mayor's Cup award and Best of Class in the Pre-War Classic Early - CCCA, 1925-1934 category.

Best of Show
This year, there were three vehicles that were clearly the most elegant and the most capable of winning 'Best of Show' honors. They were in the same class and sat side-by-side on the show field. The first car in this group to arrive was the Mercedes-Benz 500K. With six feet of hood separating the driver from the front of the Mercedes 500K, there had to be something important under all that elegantly styled sheet metal. In this case, it was a legend - and an enormous engine. The early thirties saw Daimler-Benz begin to design high-speed touring cars, with the 500K one of the proudest accomplishments. The eight-cylinder, 5-liter big-bore engine was supercharged with the 'K' standing for Kompressor, and engaging it rewarded drivers with a distinctive C-note from the 500K's whining blower. The example on display was rebodied from a 540K to a 500K Special Roadster in 2000, and the engine and chassis numbers are matching.

The second contender arrived a short time later, taking its resting spot beside the 500K. It was a Mercedes-Benz 540K Cabriolet A wearing coachwork by Sindelfingen. It is one of only 83 Cabriolet A's built and it has won numerous National Awards.

The third contender was the Horch Model 853 Erdmann & Rossi Special Roadster. It is the rarest of the straight-eight Horches, with only eight built in two series. The engine is a 4944cc OHV design producing 120 bhp at 3600 rpm, and is accompanied by a four-speed transmission with overdrive. The 853 was referred to in Horch literature as being built on a 'short wheelbase,' but shortness is surely relative, since the wheelbase measures 135 inches.

This year, the judges task for selecting Best of Show was rather easy, since the Horch had won Best of Show honors at Pebble Beach in 2004, and several other events since that time. The owner, Mr. Joseph Cassini, has had a brilliant streak of Best of Show honors at recent concours events, including Greenwich, Glenmoor Gathering, and Meadow Brook (to name a few). Though the two Mercedes-Benz were certainly contenders for Best of Show honors, the Horch was the most deserving of this prestigious award. The Horch also won the Award for Best Interior.

The Mercedes-Benz 540K Cabriolet A, owned by James Patterson, Sr. of Louisville, KY, was awarded with the 'Best of Featured Marque' award. The 500K Special Roadster, owned by the Kemp Auto Museum, won the 'Jack O'Connor Trophy' for Best Style & Elegance, in the Open Coachwork category.

The vehicle that obtained the most votes in public balloting, winning the People's Choice Award, was the 1985 Porsche Rothmans 962C owned by Stanley Ross of Columbus, Ohio. The judges selected the 962C as the Best of Class in the 'Feature Marque - German Racing, All years.'

Conclusion
The weather cooperated and the selection of automobiles were truly magnificent. The crowds responded, coming out in masses, making this year the most successful event to date.
Galleries
Antique Through 1924