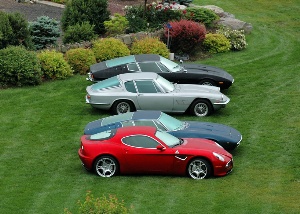 June 2009
Nestled back in rural Pennsylvania near the towering Poconos, Skytop Lodge rests atop a scenic hill surrounded by wilderness and quiet. The Lodge, with its regal stone architecture and great size, looks more like the grandiose mansion of a wealthy Englishman than a lodge for vacationing skiers. The property surrounding it is full of lovely yards overlooking a golf course and a peaceful lake. Little cabins pepper the area nearest the main building, where resting patrons may indulge in an uncluttered existence away from the hectic hustle of city living.

The Skytop Lodge would be the perfect venue for a flower show or a wedding reception, but for the last 23 years a group of Italian car aficionados have had another idea for the tranquil location. Le Belle Macchine d'Italia, a yearly gathering of Italy's finest automobiles, holds its concorso d'eleganza on the South Lawn at Skytop. Italian cars have a tendency to care little about being quiet or peaceful, placing a stronger emphasis on delivering striking performance and sinister looks. For this reason, Le Belle Macchine d'Italia introduces a different flavor to the reposeful land of Skytop.

Saturday, June 20 was the day of this year's show. The morning of the event began as would any other morning at Skytop. The sun rose slowly over the hills, illuminating the picturesque scenery. It filtered through thickening clouds, streaking the colors of a foggy dawn. Everything was fine, the morning cool and the air brisk—but then they appeared. Like poisonous spiders waiting patiently to bite, ten Lamborghinis sat in their sparkling web just in front of the main building. Parked on a small plot of grass, their intimidating creases contrasted starkly with the organic and earthy shapes of trees and cabins on the property. Through the fog, the frightening bodies of these deadly arachnids established a surrealistic feeling that was to permeate through the rest of the day.

Among the lethal herd were two LP670-4 Super Veloces. These SV's represent the latest improvement on the Murcielago supercar, and are the only two currently in America. They were Lamborghini's own factory cars. If it sounds surprising that a prestigious car maker would lend its own vehicles to a show out in the Pennsylvanian sticks, consider that Lamborghini itself was a sponsor of the event. So was Maserati, along with several dealers of such exotic cars and a few other miscellaneous groups working in the top dollar auto business.

Backed by such an impressive group, it's hardly surprising that the cars in attendance were of an extraordinarily high caliber. Only invited guests could show their cars, and the organizers of Le Belle made it a point to invite some of the finest Italian pieces around. A new Alfa Romeo 8C came from Florida, a Ferrari Dino came from Ontario, and exotics from everywhere in between filled their allotted places as cars began rolling onto the South Lawn in early morning. By about 7:00 a Ferrari 330GTC made it onto the grass, followed later by a Lamborghini Espada. A Maserati 3500GT and Ferrari Mondial entered the field together, and may have been the last cars to arrive early enough to avoid a rain soaked field.

The clouds had given up on holding their water by about 8:00, and a slow drizzle descended. Too close to the official start time of 9:00 to call off the show, organizers persisted and hoped for the best.

One by one by one the field filled with wondrous Italian machinery. A semi truck entered with the goal of unloading the treasure of its trailer, but got stuck in a soggy yard that was becoming increasingly engorged with water. The truck sunk into the earth, and had to unleash the Lambo within its trailer on site and then wait out the rest of the show until enough help could be directed towards freeing its rear wheels. That first truck set an example, and only one other car carrier risked the field (it, too, became hopelessly stuck). The cars themselves had a much easier time entering the field. All-wheel-drive Lamborghinis climbed up with ease, and the older vehicles had skinny tires that could sink in and bite down on solid ground. Some cars were towed in by golf carts, but most made it up under their own power without any major hold-ups.

Attendance was down next to prior years, a possible effect of the recession and a definite effect of the inclement conditions. The show contained just half the number of cars as last year's show, and vendor attendance took a steep dive. Spectators were a rarer find than usual as well.

Some of these problems, though, had hidden advantages within. The number of cars may have been down but the quality was not. Show goers could focus more closely on the cars there and learn a great deal. The lower number of spectators meant that a higher percentage of people at the show were actual car owners. The friendly owners were more than willing to discuss their prized devices, and their relative abundance added to the ability of show attendants to learn all about their favorites of the concorso.

The cars that made it to the show were spectacular. Throughout the day the guttural growl of exhausts could be heard roaring through Skytop, trumpeting the arrival of special cars through metallic pipes producing sounds more musical than those of the best brass instruments. A Zagato-bodied 1931 Maserati V4 stormed onto the field through light rain, flaunting its bright two-tone green paintwork and announcing its presence with the distinctive sound of a 16-cylinder engine. The V16 used a single block with two crankshafts and was exceptionally wide due to its twin overhead cams on each cylinder bank, making four camshafts in total.

A 1932 Maserati 3000 8C was present. With chassis number 3004, it was the car that won the Belgian Grand Prix in 1933 with Tazio Nuvolari behind the wheel. Other notable Maseratis included the Boyle Special and a Pininfarina-bodied 1954 A6 GCS Berlinetta. The show's announcer, Sports Car Market writer Donald Osborne, described the A6 GCS as being so lovely 'it makes your teeth hurt.' That strange description showed the powerful, and often unfathomable, feelings that can be instilled by a beautiful Italian design. A friendly and knowledgeable man, Mr. Osborne's insight held true. My teeth are still sore from the event.

Osborne also shed some light on why the Italian car business is still so highly regarded in the U.S. despite its long-time lack of a volume seller to prove the worth of Italy's ilk to the masses. In a brief interview, Osborne stated that 'the Italians have done a better job of maintaining a sense of national identity in their cars than any other country's manufactures.' He went on to say that Italy's motorcars are 'distinctly recognizable as Italian,' and have therefore continued to offer a unique motoring experience that can't be replicated.

Accounting for the high number of spectacular Masers at Le Belle was the presence of cars from the 'Historic Maserati Reunion.' In honor of this reunion, Maserati factory historian Ermanno Cozza was a special guest at Le Belle. Now 75, Cozza worked for the company when the likes of Juan Fangio and Tazio Nuvolari were racing for the storied marque. When asked what it was like to be around such incredibly important Maseratis, Cozza said 'I feel reborn.'

Despite the weather's failure to cooperate, Le Belle was a great show. It's probable that the organizers lost money thanks to the low turnout, but the wonderful cars and people made the event a hit for those who braved the elements. As the show wound down, the rain stopped for about an hour. During this time, the misty field, now with very few spectators, eerily displayed the extravagant collection of automobiles. The tarps came off as the rain held out, and time stood still as the prominent and potent sculptures decorated the landscape. The tranquility was occasionally shattered like a broken wine glass when the snarl of a wild Gallardo cracked through the air accompanied by a flash of poisonous color, and for the brief time the rain had stopped the visitors could put down their umbrellas and direct full attention at a surreal and alien landscape that formed when an infusion of raw power was introduced into nature. Eventually the rain began again, but the magic of the day surely continued into the evening when an awards dinner was held in the basement of the inn at Skytop.

Holding the awards ceremony at dinnertime was a great idea. Since many visitors, including Osborne, likely had sore teeth from the achingly gorgeous machinery, a distraction was needed to sooth the pain of chewing one's dinner. The presentation of awards presented a much needed outlet. The Best Ferrari was Charlie Wray's 512BB, and the Best Lamborghini was Lammot DuPont's Miura P400. Kendall Merritt won the Best of Open award for his Bizzarrini. The highly desirable Best of Show award, as well as the Best Maserati award, deservingly went to the stunning Maser 16-cylinder V4 of 1931. The scheduled end time for the awards dinner was 10:00, officially closing the rain-soaked but exciting events of the 23rd Le Belle Macchine d'Italia.