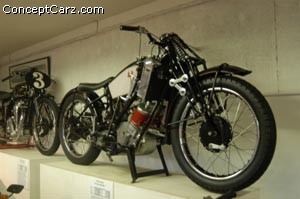 July 2003
The San Diego Automotive Museum showcases over 80 classic and historically significant vehicles from horseless carriages to 50s favorites, from muscle cars to motorcycles--even innovations of the future!

The San Diego Automotive Museum is a cultural and educational resource center contributing to the preservation and celebration of the automobile and motorcycle Arts and Sciences through community involvement.

A 1948 Tucker Torpedo, one of only 51 ever built, is currently on display at the San Diego Automotive Museum, providing a rare opportunity for the public to view the automobile that some considered the 'car of the future.' Mr. Preston Tucker and his famed -- albeit short-lived -- company became etched in the American public's imagination following the 1988 movie Tucker - The Man and His Dream, which told the tale of an ingenious man who dreamed beyond the boundaries of his time, and stirred excitement back into automotive engineering following World War II.

Recognizable by its 'Cyclops Eye' (center headlight), Tucker cars also incorporated eye-catching aerodynamic styling as well as advanced safety elements like the padded dash, pop-out windshields, and a 'safety chamber' for passengers in case of a crash. The Tucker Corporation enjoyed a brief period of glory when the cars rolled off the assembly line, but shortly thereafter allegations of business wrongdoings (Tucker was acquitted of all charges), resulting bad press and financial hardships fatally damaged the company and Tucker went into receivership in Spring of 1949 and was never to recover. The blue Tucker Torpedo (referred to as '#19') currently on display in the San Diego Automotive Museum has been owned by the same California family for nearly 50 years, and will remain on loan to the Museum from Ms. Debbie Hull for at least one year.

One of only three Bizzarinis ever built with this 'spider' body style, this is the one-and-only powered by a Lamborghini V-12 engine. Six two-barrel Weber carburetors feed the 420 horsepower, 4-liter motor, propelling the car to speeds of 170 miles per hour. Bizzarinis are considered by many to be the epitome of Italian styling and performance.

An American-made motorcycle, the Flying Merkle was built between 1909-1915. This 1912 Merkle was notably advanced for its time, sporting a 1000 cc 10E engine and a spring rear frame, a feature not commonly found on motorcycles until the 1950s!
This particular Flying Merkle has a bittersweet history. Shortly after the motorcycle' s original purchase in northern San Diego County, its young owner was sent off to war. To keep his beloved bike safe, the young man built a false wall in the basement of his parent's house and enclosed the Merkle inside until his return.

Sadly, the young man died in battle and the motorcycle was forgotten behind the basement wall. Decades later in 1970, the house hiding the treasure was scheduled for demolition and the 1912 Flying Merkle was discovered in remarkable condition! The motorcycle is on display today courtesy of the Madigan Collection.

Nicknamed the Tin Lizzie, the 1924 Ford Model T put the world on wheels. More than 15 million were made between October 1908 and May 1927. Production peaked in 1923, when more than two million cars were delivered and factories subsequently sprouted in Britain, France and Germany.
This particular Model T was extensively modified into a speedster sometime during its history. The speedster configuration is seen in the single round windshield (for the driver only) and the completely open cockpit. This Model T has a souped-up look and is an exciting variation of the historic Model T
One feature shared by all Model T's is the lack of a fuel pump. Gasoline flow to the engine was controlled strictly by gravity, so the system worked fine until drivers encountered long, steep hills. Always innovative and thoughtful, Model T drivers began turning their Model T's around backward and driving up the hill in reverse to avoid stalling!

Mr. W.E. Brough began building motorcycles in Nottingham, England in 1908. His son George followed him into the business, but after a family disagreement the younger Brough broke away from the family business and began his own endeavor in 1921 entitled 'Brough Superior.' Sound a tad spiteful? Perhaps, but the 'superior' Broughs turned out to be just that and came to be known as the 'Rolls-Royce of Motorcycles.' Notably, all Brough Superiors were hand-built twice.
Galleries
Engines
Motorcycles
The Automobiles