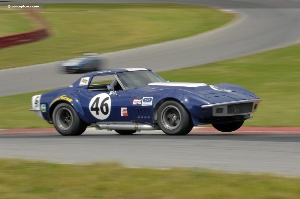 July 2009
SVRA, the Sportscar Vintage Racing Association, has upwards of 400 participants spanning ten groups of race cars with vehicles from around the world. Most of the cars are period-correct, racing in the same configuration as originally raced many years ago. The cars are arranged into groups based on a number of different criteria and offer spectators a wide variety of racing to enjoy. The list includes vintage stock cars, production-base GT racers, open-wheeled Formula cars, and more. Most events feature 10 groups of racers competing in 30 minute Sprint Series races. There are often several featured MotorCheck Enduro Series races plus several special events, which would place either a marque or type of car in the spot light.

Recently, the SVRA went racing at Mid-Ohio's 2.4-mile, 15-turn racing circuit. This years event paid homage to the history and heritage of the Mini Cooper and its over 40 years of commercial and racing success. Along with the excitement on the track, the event included a British Car Showdown and Concours d'Elegance.

The Formula 5000 Drivers Association fielded about a dozen historic Formula 500 cars from several different makes including Chevron, Eagle, Lola, McKee, McRae and Shadow, spanning production years from 1969 to 1976. Some of the highlights from this group included 1969 Gurney Eagle Championship car driven by Formula 5000 Champion Tony Adamowicz. Another impressive example was the ex-Brian Redman 1976 Championship Lola T332. According to Seb Coppola, president of the Formula 5000 Drivers Association, 'It is fantastic to have a large field of Formula 5000 return to Mid-Ohio more than 30 years after these cars competed in professional races at this storied track. Drivers and fans will enjoy a thrilling weekend they have not experienced since the mid 1970s.'

With ten groups of cars divided up by vehicle type and various other specs, the track was full of racing action. There were two enduro races with the first taking to the track on Friday and the second on Sunday. In the first 60-minute endurance race, the Lotus 23b driven by Travis Engen outclassed the rest of the field and finished in first place. The Second enduro was won by Shelby Mershon in a Lola 97/20.
Galleries
Group 1