National Automotive and Truck Museum of the United States 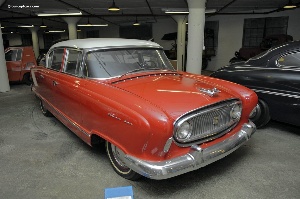 January 2009
National Automotive and Truck Museum of the United States located in Auburn, Indiana is a non-profit museum with emphasis on post World War II cars and trucks but with vehicles on display from 1908 'high wheelers' to current production pick ups. NATMUS is located in the former factory buildings of the Auburn Automobile Company. The Service Building was built in 1923 and was used for test - driving automobiles, factory service and distribution of parts to distributors and dealers all over the world. If a person lived near Auburn and wanted his automobile serviced at the factory, this would be done in the Service Building.

When the 810-812 cords were test driven and guaranteed to do over 100 M.P.H., they were tuned, prepared and tested from the Service Building. Each car was provided with a plaque signed by race driver, Ab Jenkins, indicating how fast the car had been driven at the factory.

The L29 / Experimental Building was built in 1928-29 and was the first new building that E.L. Cord constructed after he assumed management of the company. Intended for the assembly of the L29 Cord, the upper level of this building was actually used to prepare the L29s for shipment after they were assembled on the Auburn' line.

The lower level was used for experimental cars and the construction of prototypes. The first one hundred 812 Cords were hand built on the lower level. Fred Duesenberg, Gordon Buehrig, Alan Leamy, Herb Snow and other prominent designers, engineers, and builders used the lower level for their creations.

A museum within a museum, NATMATMUS features toy and model cars and trucks ranging in age from 1894 to the present. Additional exhibits of toys and models are located in showcases throughout the museum.

The Eckhart Building located near the entrance of NATMUS is where Eckhart buggies were made. As the Auburn Automobile Company evolved, the earliest cars were built in this building. The transition from buggies to automobiles is interpreted in the Eckhart Building. It is open for special events.

The museum is located at Gordon M. Buehrig Place in Auburn, Indiana 46707. It can be found on the web at: http://www.natmus.org/

Source: National Automotive and Truck Museum of the United States
Galleries
The Vehicles