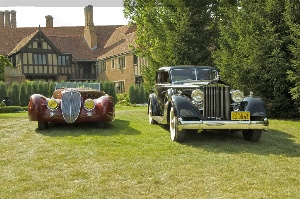 August 2009
The 30th Anniversary of the Meadow Brook Concours d'Elegance unfolded in the shadow of iconic Meadow Brook Hall and the serene campus of Oakland University in Rochester, MI. Since its inception in 1979 the event has evolved into a spectacular weekend affair including a motoring tour, welcome reception, classic car auction, gala, and the uniquely judged automotive competition of truly significant automobiles.

The theme of this year's Concours d'Elegance was 'The Best of Detroit,' a category that included leaders in design, engineering, and power. In honor of the Meadow Brook's 30th Anniversary, cars from the inaugural event were showcased, some of which were still in the same ownership 30 years ago. Additional features to this year's event included dragsters, Gassers, Rolls-Royce Phantoms, and Packards. Other headliners included a 1911 Hupmobile, a 1954 Fiat 8V Supersonic, and a 1934 Alfa Romeo 8C 2300, which made its North American debut at the concours.

Over the past 30 years, the Meadow Brook Concours has come to be hailed as one of the most prestigious car events of its kind in the world. It is an event that celebrates automotive history, heritage, quality of restoration and enthusiasm for the old car hobby.

Best of Detroit
The 'Best of Detroit' category paid homage to the Big Three and their memorable past. Car aficionados remembered the glorious past when Detroit was truly the motor that moved the world. It showcased a timeline of famous and venerable automobiles and provided an enchanting history lesson about the inspirational ideas and creativity of brilliant minds. In total, there were approximately 80 examples on display from the Motor City-based automakers including General Motors, Ford and Chrysler ranging from the 1920's through the 1960's.

Rolls-Royce Phantoms : 84 Years of History
The name 'Phantom' has been part of Rolls-Royce lineup for many decades. Introduced in 1925, the Phantom served as a replacement for the original Silver Ghost. Usually listed as Phantom I, it featured a new pushrod-OHV straight- 6 engine, which was a vast improvement over the Silver Ghost. The Phantom I was an interim step, as it still sourced many materials including the chassis, from the Silver Ghost. It was soon replaced by the Phantom II, considered by many to be Sir Henry's masterpiece and would be his last personal design. The car had significantly better performance thanks to its lower chassis and extensively redesigned engine. A high-speed touring model named the Continental soon followed. Of the 1,681 Phantom II models produced, 281 were Continentals.

The Phantom III was powered by a large 7.3-liter V-12 engine designed by Elliott and based on Rolls-Royce aircraft. It was a very modern and elegant motor car that did not enjoy much commercial success, thus, only 719 examples were built.

After World War II, Rolls-Royce introduced their new line of vehicles with the Phantom IV eight-cylinder car as their flagship model. Only seventeen examples were built for royalty and heads of state, with one other built as a factory test vehicle. The Phantom V was introduced in 1959 and remained in production until 1968, when it was replaced by the Phantom VI. The Phantom VI remained in production until the early 1990s, with a total of 374 examples produced.

The new Rolls-Royce Phantom was introduced in 2004 and built at their new plant in Chichester. It features an aluminum space frame body, a special V-12 engine built by BMW, and the traditional, elegant, and uncompromising craftsmanship that has made the company a legend.

The only Phantom Model not on display at Meadow Brook was the Phantom IV. This is understandable since so few were ever created. The Phantoms that were shown were among the finest in existence. Many had been used by heads of state and royalty, including Queen Elizabeth.

Packard V-12 : American Elegance and Performance
Packard was the first automaker to manufacture a 12-cylinder car, and between 1915 and 1923 more than 35,000 of them rolled out of the factory. Packard then turned to straight-eights, but eight years later, when Cadillac announced that it would make a V16, Packard decided to counter with another V12. The Packard V12 of 1915 had been called the Twin Six, and this name was revived for the new car, which had a 160 horsepower, 445 cubic-inch engine with banks of cylinders at 67-degrees. The Twin Six name was used for just the 1932 season, after which, the cars were called simply Packard Twelves. Between 1932 and 1939, there were 5,744 examples of the Packard Twelve produced. Today, as was true during their own era, the Packard Twelve is among the most beautiful and cherished automobiles ever created. They were offered in a number of standard body styles including those designed by in-house designer Deitrich. Many were given custom coachwork by some of the era's finest coachbuilders including Brunn, Darrin, Fleetwood, Judkins, LeBaron and Rollston.

Over a dozen Packard V-12 models were invited to Meadow Brook this year. The evocative selection included work done by Dietrich, Rollston, Lebaron, and Brunn.

Best of Show
Meadow Brook awards two Best of Show honors - one to an American and the other to a European built car. The 'American' Best of Show was an extremely difficult prediction while the European car winner was rather easy. All of the potential candidates in the European category sat in the 'European Luxury and Sport' category. Several gems quickly rose to the top, such as the 2000 Pebble Beach winner - the 1937 Delahaye 135M. The eye catching Bentley Mark VI Cabriolet by Franay had one of the nicest restorations on the field and was in superb condition. There were two gorgeous Talbot-Lagos, a T-150C Roadster by Figoni & Falaschi and a T-26 Grand Sport Coupe, that were in contention. The only car in the group to have a 12-cylinder engine was the 1939 Delahaye Type 165. It is one of only two built and wears coachwork by Figoni & Falaschi. The French Government selected it to represent France at the 1939 New York World's Fair.

Though there were several potential candidates, the judges selected the Delahaye 165 from the Peter Mullin Automotive Foundation as their favorite. It was a well deserved victory and as the crowds agreed, was also the recipient of the People's Choice Award.

With such a plethora of qualified candidates in the American car category spread out across the field, it was difficult to forecast the winner. The list included Duesenbergs, V16 Cadillacs, Chrysler Imperials, and the V-12 Packards (to name a few). Top Honors went to the stately Packard from the collection of Ray Scherr. Its twelve cylinder engine produces 160 horsepower and the elegant Sport Sedan coachwork was courtesy of Dietrich.

Conclusion
Even as Detroit and the economy continue to struggle, the Meadow Brook Concours managed to assemble one of the greatest displays of automotive excellence ever to grace the greenery at Meadow Brook Hall. There was quality and a wide variety of machinery to appeal to a vast audience. A crowd of nearly 10,000 automotive aficionados gathered on the grounds to take in the magnificent array of more than 230 collector cars. It was truly an extraordinary event that was both memorable and enjoyable.
Galleries
Horseless Carriages

Fins and Chrome : Convertibles of 1959 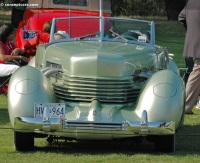