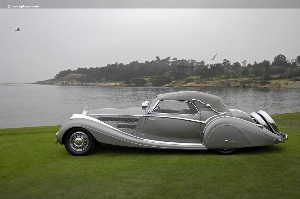 'The Horch has wonderful lines, a great proven chassis and all the beauty that make it the whole package,' said Lee, who also won best of show at Pebble Beach in 2006. 'Pebble Beach is the greatest car show in the world and winning here is indescribable. It's been a wonderful day for us here and I have the best team to thank for making it happen.'

Competitors from 30 states and 19 countries brought their prized automotive possessions to the California's Monterey Peninsula for judging in 28 classes.

'The Pebble Beach Concours is an annual glimpse of history's most illustrious and significant automobiles. It's absolutely thrilling to see more than 100 years of automobiles lining the 18th fairway – coming to Pebble Beach from places as far as Hong Kong, Argentina and Australia – while knowing that all proceeds are adding to the more than $13 million we've raised for our charities through the years.'

In 1935, the Horch Company, founded by August Horch in 1899, introduced a new model with a 5-liter, straight-eight engine called the Horch 850. The shorter wheelbase 853 model, which won Best of Show today, was very popular among Germany's rich and famous, offering luxury at a very competitive price. The last Horch was built in 1958.

Bentley, a featured marque at the 2009 Concours, had the largest presence on the Pebble Beach show field. The Concours also celebrated the centennials of Bugatti, Audi and Morgan, and highlighted the styling of Zagato. Motorcycles were displayed for the first time in a class of British bikes built through 1959. In all, more than 200 cars and motorcycles were present, encompassing more than 100 years of the automobile.

The Pebble Beach Concours occurs every year on the third Sunday in August. Among the featured marques for the 60th Pebble Beach Concours, slated for Sunday, Aug. 15, 2010, will be Alfa Romeo and Pierce-Arrow. The event will also welcome Hot Rods back to the show field, as well as the second annual motorcycle class showcasing American bikes. Other features will be announced in coming months.
Galleries

Bugatti - 100 Years of Style and Speed

A Century of Morgan Motor Cars