Carmel-By-The-Sea Concours On The Avenue 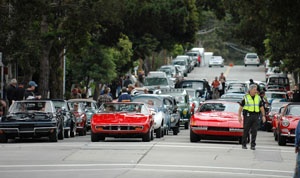 August 2009
The Pebble Beach / Monterey Weekend began with the third annual Carmel-By-The-Sea Concours on the Avenue. The event took place in Carmel, CA just miles away from the location of the famed Pebble Beach Concours, happening just several days later. Though there is a flurry of other events that occur during this hectic time, the Concours On The Avenue brings its own flavor, featuring a wide range of vehicles and one of the few events to showcase American cars built in the post-war era. Porsche and Ferrari were this years feature with several categories reserved for each marque. The entry list was limited to 180 vehicles, though there were certainly more than 200 motorcycles and automobiles on display.

Due to the slow economy, the Concours on the Avenue was condensed from two-days into one. Last year, Porsche and Ferrari were featured on the first day with the second day showcasing many attainable vintage cars and production automobiles built between 1949 and 1971.

The Vehicles
The list of vehicles included racing, European masterpieces, American muscle, family favorites, vintage, and micro cars. In the 'American & Continental European Sport' category was a Crosley Hotshot, considered by some to be America's first post-war sports car. The small, two-seater is powered by an overhead cam engine with a displacement size of only three-quarters of a liter. The Muntz Jet in attendance was the 15th built by the Muntz car Company, and one of the 39 that were produced in Glendale, California, before production was relocated to Illinois. The car's initial design was done by Frank Kurtis, but Kurtis sold a license to Muntz to manufacture the cars. Another low production car was the Sunbeam Alpine. The series IV example on display was on its third owner but still in its original, unrestored condition. Arguably the most attractive car in this category was the Corvette bodied by Carrozzeria Scaglietti in Maranello, Italy. It was given a lightweight alloy body and a Chevy powerplant.

In the American Family Favorites category was a very rare, and seldom seen vehicle from Packard, the Series 58L produced during the final years of the company's long and glorious history. The example on display was produced on July 23rd of 1958 and the line was halted on July 25. By this time these cars were Packards in name only - the 1957 and 1958 cars were essentially re-badged Studebakers as the two companies had merged.

In the 'American, British and European Luxury' category was a Facel Vega, a combination of the best of France and the best of America; it was built by Facel, a company with much experience building bodies for other manufacturers, and at first it had an early DeSoto Hemi V8 engine under the hood. Sitting just a short distance away from the Facel Vega was the Dodge Custom Royal 'La Femme.' It is one of approximately 300 'La Femmes', and one of an estimated 50 still in existence. Dodge went overboard with their 'from the factory' customizing of the Custom Royal Lancer specifically targeted at attracting women who at the time were just being viewed by the car companies as decision makers in their own right. La Femme - only colors Regal Orchid and Misty Orchid, for example, plus special interiors for 'the woman who wanted a distinct and uniquely feminine automobiles.'

In the British Car Category was a Austin-Healey 100/4 which has been in the care of the same owner since new. The car was customized in the mid 1960s by California Metal Shapers (which worked on the Cobra coupe and Scarab), giving it a coupe body.

In the 'Historic Race' category was a 750cc S-Type that went to LeMans in 1959 as a factory entry. Regrettably the water pump 'went' after 32 laps and it was DNF. The Arnolt-Bristol Roadster in this category was the original European demonstrator and show car. Sold new in Paris in 1954, this white and blue over blue car was the company's show car in Geneva, Turin, Brussels, Munich, and Paris.


Best of Show
With a wide selection of vehicles to select from, it is often hard to predict the winner of the coveted Best of Show trophy. Though there were several suitable candidates, none could compete with the Ferrari 250 Testa Rossa (TR) owned by Jon Shirley of Medina, Washington. A similar 250TR recently set a new world record at Auction, selling for over $12 million, and reinforcing the belief that the 250TR is one of the most significant automobiles in existence. From 1956 through 1961, Ferrari built 34 examples of the TR and won the grueling 24 Hours of LeMans in 1958, 1960 and 1961. It was no surprise when the judges selected the 250TR as their favorite.

Conclusion
The Concours On The Sea was a tranquil blend of the rare, the rarely seen, and the memorable.
Galleries
American & Continental European Sport