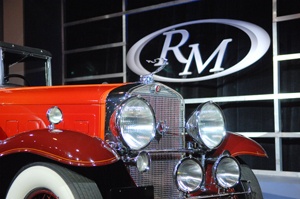 August 2009
RM Auctions kicked off a busy month of auction action in Rochester, Michigan over the weekend, posting in excess of $5.4 million in total sales with an impressive 79% of lots sold at its 15th annual Vintage Motor Cars of Meadow Brook event on August 1st.

Held in conjunction with the 30th anniversary Meadow Brook Concours d'Elegance, the single-day event presented some 102 magnificent collector cars for auction, along with a select range of memorabilia. Well-attended by discerning collectors from across North America, the auction set the scene for the Concours 'Best of Detroit' celebrations the following day by shining a spotlight on Michigan's rich automotive history with numerous auction cars making their way back to their Motor City birthplace for the event.

'Our annual Vintage Motor Cars of Meadow Brook event is a mainstay of our auction calendar and one we all look forward to each year. This year's event was a great start to a busy month ahead, posting strong results, including a solid 79% sell through,' says Ian Kelleher, President and Chief Operating Officer of RM Auctions.

The top-seller of the auction was an elegant, beautifully restored 1935 Auburn 851SC Boattail Speedster – the ninth speedster built and originally used as the Chicago Auto Salon show car – which brought an impressive $462,000, while an award-winning 1933 Chrysler CL Imperial Sport Phaeton, one of just 36 built, achieved $319,000.

An additional highlight of the auction was the sale of a factory-original 2005 Ford GT super car – the sixth built - offered on behalf of the Ford Motor Company's Global Walk Team and selling for $187,000, with a portion of the sale proceeds benefiting the Juvenile Diabetes Research Foundation (JDRF). To coincide with the offering, a group of JDRF youth ambassadors were in attendance to witness the car's sale. A second factory-original 2005 Ford GT will be offered at RM's Monterey event on August 15th.

'What an amazing opportunity for our JDRF youth ambassadors to be a part of this fantastic event and help Ford and RM Auctions raise such a large contribution to find a cure for diabetes,' said Gina Roche-Kelly, JDRF / Ford Global Walk Team Senior Account Manager, following the sale.

RM also had a strong presence on the show field at the Meadow Brook Concours d'Elegance, with numerous winning entries having passed through the doors of RM's esteemed restoration division in recent years. Included amongst the list of winners was a stunning 1933 Auburn 8-98 Convertible Coupe, awarded 'Best in Class' in the Auburn - Cord - Duesenberg Class, and a 1929 Rolls-Royce Springfield Phantom 1 Brewster, judged 'Best in Class' in the Rolls-Royce Phantom Class.
Galleries
1886-1931