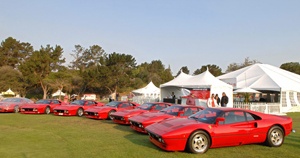 September 2009
Concorso Italiano, a well established annual event, had everything to prove this year. The 2008 event was marred by cold and windy weather and was at a barren airport location that did not have the scenery or the pavement to house such a prestigious event. Many began to think this might be the end of the glorious annual show; car clubs, car owners, and spectators vowed they would not return in 2009.

The new owners worked hard to return the event to its former glory, and to convince spectators and car owners to reconsider. To make things even more difficult, a new event of similar genre announced its arrival to the bay area and was held on the same day.

The organizers secured a new location at the green fairways of Laguna Seca Golf Club, just minutes away from the Laguna Seca racetrack and the Monterey Historic Races. The location was picturesque, with rolling hills and plenty of greenery to house the thousands of cars and spectators. With a new location and after countless promises that this year's event would be different than 2008 - Concorso Italiano returned in a big way! Attendance appeared to be very strong and the list of automobiles in attendance seemed to be endless. Along with modern supercars, there was a vast selection of classics and ultra-rare road-going vehicles.

This 2009 event celebrated the 25th anniversary of the Ferrari 288 GTO, with no fewer than 15 Ferrari examples in attendance. This marked a new world record for participation of the model at a single event.

Sitting in close proximity to the 288 GTO display was another highlight - all three of the Alfa Romeo BAT concepts from the 1950s. These aerodynamic research vehicles were designed by Bertone and put on display at the Turin Auto Show between 1953 and 1954. All three rested on Alfa Romeo chassis and powered by Alfa power-plants. A fourth BAT car, the BAT 11, was also on display. This car is a modern one-off version of the legendary BAT cars built as a design exercise commissioned by a private client.

Another feature was the cars of DeTomaso. An assortment of sports cars from the defunct company's past were in attendance, with the most popular and remembered example of the companies legacy being the Pantera, with its wedge shaped design and Ford 351 Cleveland engine mounted mid-ship. The car's designer, Tom Tjaarda, was in attendance. Other 'celebrities' at the event included Lilli Bertone, the widow of designer Nuccio Bertone and the current head of the Stile Bertone design firm. The recently retired Lamborghini test driver Valentino Balboni, stunned the crowd by driving the new Lamborghini LP550-2 Valentino Balboni Special Edition onto the awards ramp. There to welcome him on the ramp was TV Show host Jay Leno.

Ferrari and Lamborghini accounted for the largest number of automobiles on the field. Alfa Romeo, DeTomaso and Fiat also had a strong presence. Other legendary Italian names to grace the greenery included ISO, Innocenti, Maserati, Lancia, and Citroen. TAmerican cars, Dolorean and the Cadillac Allanté were allowed onto the field and to inter-mingle with the Italian cars. The Allanté wears coachwork by Pininfarina while the Delorean was styled by Giorgio Giugiaro, derived from his Tapiro concept-car design of 1970.

Conclusion
The new organizers of the event did not pull any punches, as the 2009 edition of Concorso Italiano was a spectacular success. Sponsors, car owners, vendors, and spectators showed up and there was plenty of room for everybody. With thousands of vehicles on the show field, there were no shortage of smiles. The only thing missing at this year's event were the complaints.
Galleries
Alfa Romeo
DeTomaso