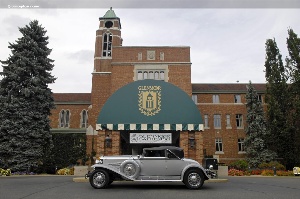 September 2009
The 15th annual Glenmoor Gathering of Significant Automobiles showcased over 200 invitation-only vehicles arranged in two dozen categories on the beautiful grounds of the Glenmoor Country Club in Canton, Ohio. The event honored one of the most underrated automobile executives, Edsel B. Ford, the only son of Ford Motor Company founder Henry Ford. The Grand marshal was Moray Callum, the newly-appointed executive director of Ford Americas design. The event also recognized the accomplishments of Alice Ramsey, who, in 1909, became the first woman to drive an automobile across the United States.

The diverse field of cars ranged from the early 20th century to the modern 'muscle' era. At the far end of the field were modern supercars from such legendary marques as Vector, Alfa Romeo, Bugatti, Lamborghini and Ferrari.

It seems that every year, there are several 'memorable' categories that resound in the hearts of the automotive enthusiast. Leading the way was the Amelia Island Concours with their 'Giallo Fly - Yellow Italian Cars.' The Meadow Brook Concours had their 'Swoopy Coupes' featuring several fastback designs from the late 1930s and early 1940s from many different marques. On paper, these categories are both 'fun' and genius. On the show field, with each vehicle complimenting the next, these categories were truly memorable. The Glenmoor Gathering had an equally intriguing and memorable category - 'Vintage French Fronts.'

The French Front category was reserved for pre-War cars that had no radiator or grille shell and did not conform to the traditional design of other motorcars. Renault, one of the world's oldest automakers, was an early pioneer of this styling idea. Franklin, an American based company, also championed the design, though for an entirely different reason. The Franklin had no need for a grille since their engines were air-cooled. The Glenmoor Concours did an exceptional job at showcasing many of these rare and unique cars at their event. The list of examples included several Renaults and Franklins, along with a 1903 Autocar, an electric-powered Argo, and a Siddeley-Deasy.

At this year's event, several categories were reserved for Edsel Ford. One was for cars he personally owned, one for Ford and Mercurys, one for classic Lincolns, and another for Zephyr & Continentals. Ford's creativity and passion was easily evident in each of these categories. The category housing the cars once owned by Edsel Ford was a visual representation for his personal tastes in automobiles, which extended to expensive foreign makes such as the 1922 Hispano Suiza with custom coachwork by Brunn of Buffalo, NY. Also in this group were two breathtaking Speedster Specials and a one-off Brewster bodied Ford.

In the Professional Cars category were some remarkable works of art and craftsmanship, particularly the two Packards. Both Packards were built in 1937 and are currently on display at the Canton Classic Car Museum. One is a flower car; the other an 'Art Carved' Hearse. These rolling works of art rode on a chassis that was extended by 34 inches, increasing the wheelbase to an impressive 166 inches. On the hearse, skilled craftsman hand-carved the outside panel from mahogany to resemble drapes, or curtains. The inside is just as impressive - with lights that shine on the hand carved, cathedral shaped columns when the rear door is open. Deep purple velvet interior adds warmth and elegance.

Sitting in close proximity to the Professional Cars category were the American Performance cars and the Great American Woodies. The woodie category had the station wagon design along with the seldom seen two door convertible style. In the American Performance group were many legendary names, including the Charger, Road Runner, Firebird, and GTO. The 1970 Chevy Hurst Yenko Nova was one of only 50 built by Hurst at the direction of Don Yenko. It is one of only 10 produced with the Huggar Orange paint job, and the only example ever built with the Hurst five-spoke magnesium wheels.

Best of Show
As the cars continued to roll onto the show field, several cars began to stand out as contenders for Top Honors. Two of the early potential cars were the sixteen cylinder Marmon and Cadillac. They were some of the most mechanically significant cars on the field wearing clean, well-restored coachwork. Three other cars appeared to be potential winners - a Duesenberg, a 540K Mercedes-Benz, and a Graham Series 116. The Graham, an unlikely winner (not because it wasn't deserving but because of its competition), had a six-cylinder, supercharged engine and a wheelbase that measured 116-inches. The coachwork was courtesy of a Switzerland based firm called Worblaufen. The two-door convertible coupe had teardrop fenders, no running boards, and plenty of chrome. The Graham was positioned next to the 540K Mercedes-Benz. Comparing these two cars, the 540K had a more profound presence. It is a one-off custom built Cabriolet by the German coachbuilder Sindelfingen. The letter 'K' in the model designation stood for 'Kompressor,' German for supercharger. While the Graham had a six, the Mercedes had an eight-cylinder motor.

The Model J Duesenberg wore coachwork by Hibbard & Darrin in a closed coupled Victoria design. It is one of only 12 bodies produced by Hibbard and Darrin for Duesenberg.

Making the decision for Best of Show was a long list of capable judges. Included in the list were Bill Warner, founder and director of the Amelia Island Concours, and Larry Smith, the past chairman of the Meadow Brook Concours. With automotive legends such as these, it was guaranteed that the best car on the field would be chosen. That car was the Duesenberg owned by the Off Brothers of Hickory Corners, Michigan.

Conclusion
Beautiful scenery, warm weather, and a great selection of historically unique automobiles made the 15th Annual Glenmoor Gathering another great installment of this event. It is one of the premier concours events on the east coast and continues to attract great cars, top collectors, and capable judges.

The event attracts thousands of automotive enthusiasts. In 2008, more than 4,500 people were in attendance. The weekend activities include a countryside tour, cocktail party and gala dinner, cooking demonstrations, a junior judges' program and other family activities.

Sharing in the proceeds from the annual event were the Mercy Medical Center of Canton, its Emergency Department Expansion and Renovation project, and University Hospital Rainbow Babies and Children's Hospital.
Galleries
1919 and earlier