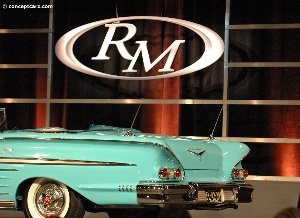 October 2009
Preeminent international auction house, RM Auctions, has continued its strong 2009 sales run, posting in excess of $9.1 million in sales with an impressive 94% of motor cars sold at the Vintage Motor Cars of Hershey event in Pennsylvania this week.

Held in conjunction with the famed AACA Eastern Division Fall Meet, the two-day auction kicked off Thursday, October 8, with the highly successful sale of a private East Coast collection of automobilia, which achieved over $400,000 in total sales. Continuing the momentum, yesterday's auction presented some 50 lots of memorabilia and 136 motor cars to a packed audience.

The evening's top sale was a highly desirable 1931 Marmon Sixteen Convertible Coupe which realized $517,000, while a largely unrestored 1933 Cadillac V16 Convertible Victoria brought $412,500. The handsome Cadillac V16 was one of just two examples built and was originally owned by Hollywood actor Robert Montgomery.

Another highlight for enthusiasts was the Miller 91 Front Drive Engine, considered one of the most important Miller artifacts to come to the market in decades. Attracting spirited bidding, the Miller engine nearly tripled its original estimate, selling for $297,000. A 1909 Stanley Model E2 Runabout also well-exceeded its pre-sale estimate with a winning bid of $176,000.

'Our Hershey auction was incredibly well-attended by bidders and buyers from around the world in a standing-room only atmosphere. We look forward to building on the strong results and welcoming collectors to our London auction later this month,' he added.

RM Auctions will conclude its 2009 auction calendar later this month with the return of the distinguished Automobiles of London event, October 28. Presented in association with Sotheby's, over the past three years the London auction has carved a reputation as one of Europe's leading collector car events for the highest quality automobiles. This year's event is set to continue the grand tradition with over 80 of the world's finest collector cars to go under the hammer.