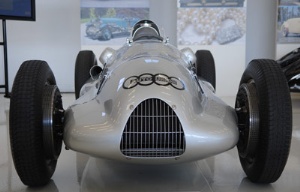 August 2009
Once again the beautiful and sunny setting of Carmel Valley, California, drew collectors from around the world to Bonhams' flagship Quail Lodge motorcar auction last Friday the 14th.

Elsewhere in the sale there were a number of strong results, the market being most buoyant for the rarest and freshest offerings. These included:

A $27,500 hammer price for a rare Mickey Mouse nickel plated mascot from the 1920s and $27,500 paid for the 'Cinq Cheveaux' glass mascot by Rene Lalique - quite possibly a new world record for both types of mascots.

It was clear that buyers are more selective in this financial climate and there were a handful of no sales that included the Bugatti Type 57S and Auto Union race car. (However, approaches have recently been made concerning post-auction sales for both these stunning cars, which may effect a further press release.) In all, with prices recorded ranging from well over estimate to under estimate and some spot on, the sale was clearly in balance with current conditions.

'This auction perfectly illustrates the strength of the Bonhams' motoring team worldwide – our specialists working in harmony throughout the year to assemble a well tailored sale to appeal to this particular market and achieving strong results', said Malcolm Barber, CEO Bonhams Group. Adds Motoring Department Head Mark Osborne, 'Our international clientele have come to expect the very best and the annual sale at Quail Lodge offered just that.'
Galleries
1899-1938