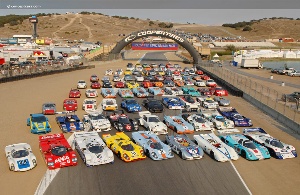 August 2009
The 36th Edition of the Rolex Monterey Historic Automobile Races, one of the most exciting and eventful spectacles of its kind in the world, honored Porsche as their featured marque. This multi-day racing event is held annually at the 2.238-mile, 11-turn Mazda Raceway Laguna Seca. Along with the plethora of significant cars on the track, the event attracts many very big names in auto racing, including Derek Bell, David Donohue, Vic Elford, Jurgen Barth, Brian Redman, and Hurley Haywood.

There were 450 entrants in 15 different race groups with one-third of the race cars being Porsches, representing 61 years of the company's legacy. The company has been the featured marque at the Monterey Historics on two prior occasions - in 1982 and in 1998. This third appearance allows them to join Ferrari and Alfa Romeo as the only automakers to be selected three times.

Porsche has always had a very strong loyal customer following, and this has served as one of their key ingredients in their racing success. They built an early reputation with the 356 and evolved to another level with their 911 sports car. Over their prestigious career of racing and building cars, their accomplishments have firmly established them as one of the finest makers of sports oriented production models and one of the most winning names in the sport. Porsche has continued its racing determinations and their commitment to its racing program over the years, with entries for SCCCA's Can-Am, the World Championship of Makes (WSC) Group C category and IMSA's GTP. In all their endeavors, Porsche would come out on top.

Nearly every post-War category at the Monterey Historics was filled with Porsches, with the popular 356s and 911s in various forms being seen on multiple occasions throughout the weekend. It was no surprise to see the 917 in the CanAm category. Its first appearance in the series was mid-season in 1969. Their entry was the 917 PA open-cockpit car with a body inspired by the 908/2 Flounder prototype. It was fitted with a 56 gallon fuel tank and powered by a flat-twelve, air-cooled engine with twin overhead camshafts and a fuel-injection system. In the six races it competed during the 1969 season, it finished in all but one, took second once - and placed fourth overall in the Can-Am championship. Following this success, Porsche launched a full Can-Am assault with the 917/10 and 10 Turbo taking the Can-Am laurels away from McLaren. Appropriately, two 917s were raced at the Monterey Historics; Brian Redman drove the 917 PA that was originally driven by Jo Siffert in 1969 and Hurley Haywood piloted his old Brumos 917/10K.

On the pole in the FIA Manufacturer Championship Car Category was two-time LeMans winner Gijs van Lennep. Beside him was five-time LeMans winner Derek Bell followed by Brian Redman. Redman drove a 908/3 while the other two drove Porsche 917Ks. Redman would finish the race in first place after Bell's car suffered mechanical problems after three laps and ran the remainder of the race on only six cylinders. Not only was it an exciting race, it was an impressive spectacle with two additional Gulf 917Ks, a total of three 908/3s, a Ford GT40, Ferrari 512S, and an Alfa Romeo Tipo 33/2.

The highly successful 956 and 962 cars could be seen competing in the IMSA GTP & FIA Mfg. Championship category. The 956 was the winner of LeMans in its first appearance while its derivatives, the 962 and 962C, are arguably the most successful single series of endurance racing cars ever built with more than 120 victories over a 13-year span. At Monterey, the Porsche 956 and 962 continued their dominant streak, with Mark Hotchkis in the Fabcar-built 962 winning the 10-lap race. The Kremer K8 car driven by Gunnar Jeannette came in second.

Many of the cars circling the track are priceless or of very significant value. In the Group 6A Sports Car category, this was very evident as five Ferraris were on the grid. Four of the cars were the pontoon-fendered 250TRs, while the fifth car was the legendary 4.1-liter 335S. The 250TR driven by David Love came upon the 'Corkscrew' portion of the course a little too aggressively. Love lost control of the car and it ran into a barrier near the exit, causing significant damage. Since a similar example recently sold for over $12 million at auction, it can be assumed the damages will be repaired and the car restored to pre-crash condition. Though many museum-quality vehicles sit peacefully in a showroom, the owners who bring their cars to the Monterey Historics, drive them to win. Unfortunately, accidents are part of the gamble.

A popular attraction during the race weekend is the Rolex Moments in Time display. The 1969 24 Hours of LeMans winning Gulf Ford GT40 was one of the six paragons on display, along with the 1969 908LH Porsche that took second place that year. The Gulf GT40 claimed victory by only four seconds and it is known as the closet LeMans finish in history.

Conclusion
Since August of 1974, the Rolex Monterey Historic Automobile Races has provided a comprehensive history of the sport of racing, from its earliest period to the modern racing machines of today. It has been organized by General Racing, which was founded by Steven Earle in 1970. Since the beginning, General Racing has worked diligently to organize a special event that welcomes owners of rare and valuable cars and allows them to compete in a safe and professionally managed environment. The event has grown into one of the world's premier vintage racing spectacles.

Along with Porsche being named the Featured Marque and 145 cars competing at the event were Porsches, the event celebrated the 40th anniversary of the 917. It also served as the venue for the introduction of the new 2010 Porsche Panamera Gran Turismo. It is simply the newest, most daring and most advanced vehicle Porsche has produced to date.

'The field of cars is really extraordinary and not just the Porsches but all of them,' said Steve Earle of General Racing, which produces the event. 'The racing (for 15 different race groups) was excellent -- pretty darn clean -- and as long as everybody is having a good time, then I am happy.'
Galleries
1904-1940 Sporting Cars