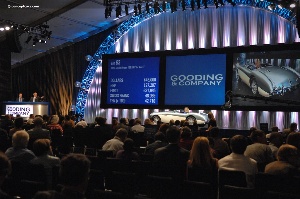 Gooding & Company, the official auction house of the Pebble Beach Concours d'Elegance®, sold 129 total lots over both Saturday and Sunday auction events, collectively earning more than $50 Million* in sales. Continuing its successful presence at the Pebble Beach Concours d'Elegance and as the leading auction house in Monterey, Gooding & Company attracted thousands of collectors and enthusiasts from around the world last week.

In contrast with many of the evening's award-winning classics, guests at Sunday night's auction event witnessed the historical sale of 'Chassis Number One' of Bentley Motors' Mulsanne, the new flagship grand tourer model that was conceived, styled and engineered entirely at Bentley's headquarters in Crewe, England. Selling for $550,000, proceeds are being donated to the Pebble Beach Phil Hill Scholarship.

Gooding & Company's top ten sales results from both Saturday and Sunday include:

Gooding & Company will be conducting its annual Scottsdale auction on Saturday, January 23, 2010 in Scottsdale, Arizona.

* The prices are in US Dollars, include the buyer's premium and are rounded to the nearest dollar. Gooding & Company is not responsible for typographical errors or omissions.

Gooding & Company provides unparalleled service for those in the collector car market, offering a wide range of services, including private and estate sales, appraisals and collection management. At its previous four auctions, Gooding & Company sold a combined total of more than $178+ Million in collector automobiles, with 55 vehicles selling for more than $1 million and nine vehicles selling for more than $3 million. As the official auction house for the Pebble Beach Concours d'Elegance®, Gooding & Company sold more than $64 million worth of collector automobiles in August 2008. For more information, please contact (310) 899-1960 or visit www.goodingco.com.

First conducted in 1950, the Pebble Beach Concours d'Elegance® (pebblebeachconcours.com) has grown to become the world's premier celebration of the automobile. Only the most beautiful and rare cars are invited to appear on the famed 18th fairway of Pebble Beach Golf Links®, and connoisseurs of art and style flock to see these masterpieces.
Galleries
1901-1924 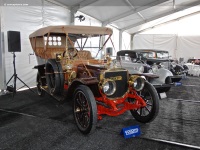