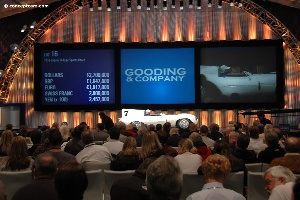 
Gooding & Company, the internationally-recognized auction house, collectively garnered $33.9 Million in sales, with a total of 114 out of 125 lots sold, during its two-day Scottsdale auction held on Friday, January 22 and Saturday, January 23. This year's top-seller was the 1956 Jaguar D-Type Sports Racer that sold for $3.74 Million, a star for its noteworthy provenance and stunning restoration. The sale of the D-Type marks the third consecutive year that Gooding & Company has sold the top-selling car of Scottsdale Auction Week.

'This year was our most successful Scottsdale auction to date with a total of 91% sold,' said David Gooding, president and founder of Gooding & Company. 'We were thrilled to bring such an outstanding collection of automobiles to Arizona and to have so many cars break the $1 Million range.'

Gooding & Company broke two world records with the sale of the 1959 Costin Lister Jaguar Sports Racer for $1.1 Million on Friday and the sale of the 1932 Alfa Romeo 6C 1750 Series V Gran Sport for $1.54 Million on Saturday. This success follows in the wake of a strong $50+ Million sale in August at the 2009 Pebble Beach Auction. Once again, Gooding & Company attracted automotive collectors and enthusiasts from around the world for its third consecutive year at the Scottsdale Fashion Square Mall.

Gooding & Company made a significant donation to the International Response Fund of the American Red Cross this week to benefit the relief efforts in Haiti and also hosted a successful donation center on site during its Friday Auction.

Gooding & Company's top ten sales results from both Friday and Saturday include:

* The prices are in US Dollars, including the buyer's premium, and are rounded to the nearest dollar. Gooding & Company is not responsible for typographical errors or omissions.

Gooding & Company will be conducting its first-ever Amelia Island Auction on Friday, March 12, 2010 at 5 p.m. on the grounds of the Amelia Island Plantation, where more than 50 exceptional collector cars will be showcased, including the Best of Show 1931 Voisin C20 'Mylord' Demi-Berline, a stunning light blue 1937 Peugeot Darl'Mat Roadster, a rare 1956 Mercedes-Benz Station Wagon and a 1963 Jaguar E-Type.

Auction catalogues at the Amelia Island Auction cost $75 and admit two to the viewing and auction. General admission tickets can be purchased for $30 per person. The auction will be broadcast live from Gooding & Company's website on www.goodingco.com/auction. Bidder registration forms, press credentials and additional auction information are also available on www.goodingco.com or by calling (310) 899-1960. For additional vehicle information and up-to-the-minute results, follow Gooding & Company on Facebook and Twitter @GoodingCompany.

Gooding & Company provides unparalleled service for those in the collector car market, offering a wide range of services, including private and estate sales, appraisals and collection management. Known for its annual standing as the official auction house for the Pebble Beach Concours d'Elegance, Gooding & Company will return to Pebble Beach, California on August 14 & 15, 2010.
Galleries
1909-1931