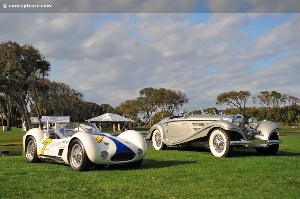 March 2010
For over a century, the automobile has been a means of transportation and entertainment. It has been an evolutionary process that has seen its share of exceptional and elegant creations along with the unorthodox 'out of the box' disasters. For the past 15 years, the Amelia Island Concours d'Elegance has been celebrating this history and educating thousands of show-goers with a vast array of vehicles. It has proven to be one of the nation's most innovative vintage auto event show-casing many rare and classic vehicles from seldom-seen private collections nationwide.

For their 15th year anniversary celebration, the Amelia Island Concours (held at The Ritz-Carlton, Amelia Island, Florida) invited stock car legend Richard Petty 'The King' as their Honoree. In addition, the event honored the 40th anniversary of Porsche's inaugural victory at the 24 Hours of Daytona and Le Mans with their 917, a model that is considered by many to be one of the most significant racecars of the modern era. This year's event also honored Sir Stirling Moss and the 50th Anniversary of Moss' victory in the last Cuban Grand Prix.

The celebrated Marque was Mercedes-Benz. There was a collection of iconic Mercedes-Benz automobiles including the legendary LeMans-winning 1952 300SL and 1956 300 SL 'Gullwing' Coupe, along with the newly introduced 2011 SLS AMG. 'The SLS AMG and Gullwing displays at the 15th anniversary of the Amelia Island Concours d'Elegance are top examples of Mercedes-Benz historical significance and major contributions with the automobile industry,' said Stephen Cannon, VP of Marketing, MBUSA. 'The iconic 1954 Gullwing represents the leading innovation Mercedes-Benz is known for throughout history and the SLS AMG sets a new standard for supercars of the future just like the 300 SL did over 50 years ago.'

The Categories
American Classics, European Coachwork, American Production (Post War), Horseless Carriage, Duesenberg, Ferrari, Rolls-Royce Silver Ghost, Sports and GT cars, and Race Cars are re-occurring categories at the Amelia Island Concours. Show-goers are treated to new displays within each of these groups each year. The 'Cars You Never Knew Existed' category, seen at the 2008 event, was re-introduced for 2010. Special this year were the 'Forgotten Fiberglass', 'Motor Trend Cover Cars', 'Special Lincoln Display', and the 'Etceterini' Groups.

Etceterini cars are small displacement, hand-made, Italian racing cars that were produced for a brief time, beginning near the close of World War II and continuing through the early 1960s. Though small, they competed at some of the toughest races of their time, including the Mille Miglia. The concours did an exceptional job at assembling a great representation of this group, bringing some of the finest examples in existence. Marc Richelsoph's 1957 Bandini Sport International was chosen by the judges as the 'Best in Class.' The car has a lightweight chassis, a streamlined body, and a heavily modified engine courtesy of Ilario Bandini. Bandini used it in competition in Italy prior to it being imported to the United States in 1959.

A very popular and well-visited category was the 'Motor Trend Cover Cars.' These were some of the automotive rarities that all appeared on the cover of Motor Trend magazine between 1949 and 1956. There were seven cars in this category which ranged from home-built specials to factory developed concepts. The most anticipated car in this category was the freshly restored Timbs Special created by aircraft design engineer Norman E. Timbs. The shape of the car is a close approximation to the Auto Union Type C and Mercedes-Benz W25 Avus Streamlined GP racers from the 1930s. The car chosen for 'Best in Class' in this category went to the 1955 Ghia Streamline X 'Gilda' owned by Scott Grundfor and Kathleen Redmond. This concept was a styling exercise built for the 1955 Turin Motor Show. Its importance was derived from the studies of aerodynamics through wind tunnel tests conducted at the Turin Polytechnic and it had a decisive influence on the evolution of the styling of American cars in that period.

The 'Forgotten Fiberglass' group was reserved for cars clothed in fiberglass that were produced in the 1940s and 1950s. Devin, Victress, Byers, Glasspar, and Bocar were some of the cars included in this group. The 1953 Kurtis-Meteor SR-100 owned by Dudley Cunningham was chosen as 'Best in Class.'

The 'Cars You Never Knew Existed' category was a special group that showcases unusual mechanical creativity with unique designs. Examples included a vehicle that resembled a train built for the road, an Indy Car racer in the shape of a torpedo with a sidecar, and two airplane inspired cars. The two airplane cars were propeller driven (the Fascination prototype originally had a propeller in the rear which has since been removed). Best in Class went to the unrestrained and unconventional Di Dia 150 owned by the Museum of Transportation, formerly the property of Bobby Darin.

The Concours de Sport, this year, was extremely hard to predict, while the 'Concours d'Elegance' award winner was a little more obvious. It was a safe bet that the winner of 'concours d'Elegance' was to come from either the Duesenberg, European Coachwork, or Classic Mercedes category. From those three groups, the Mercedes-Benz 540K Special Roadster, owned by Sam and Emily Mann, was a top contender. The flowing lines, elegant convertible body style, and silver colored paint-scheme were astonishingly similar to the Horch that won last year's Pebble Beach Concours. Along with its attractive attire, the car had amazing performance; the 540K series was the fastest production automobile of its era. The judges showed their admiration for the car by bestowing 'Best of Show' honors to this timeless masterpiece.

It was not clear where Concours de Sport might come from. The Porsche 917 was a dominant car and one of the most significant racecars of the modern era. The Porsche 917 category housed 9 examples that were worthy of this award. Sitting in close proximity was the 'Cars of Richard Petty' category, which included the 1974 Dodge Charger - a car that may have won more races than any other car in NASCAR history. There were three 'Race Car' categories that spanned the Post War era through 1979, ranging from Indy and Sprint cars, to Can Am, Group C, and IMSA racers. To make things even more difficult, there was the 'Cars of the Cuban Races' category, which housed a Jaguar D-Type, a pair of Ferraris, and three breath-taking Maseratis. Judging elegance and racing significance seemed like it would be a monumental task for for those making this difficult decision. By the time it was ready to announce the winner, the judges had chosen their favorite - the 1960 Maserati Tipo 61 owned by Jonathan Feiber. The car had been entered in the 1960 Cuban Grand Prix for Stirling Moss by Camoradi USA. The win was the only professional victory under the Castro regime. Later, Moss teamed with Dan Gurney to win the 1000 KM of Nurburgring in Germany with the Tipo 61.

Conclusion
The rain and cloudy weather of the days leading up to the event were displaced by a warm and sunny climate. From brutal muscle cars and blistering fast to elegant road going vehicles, the Amelia Island had it all. There were over 250 vehicles carefully arranged on the well-manicured golf course lawn, making a perfect union of both quantity and quality.

After just 15 short years, the Amelia Island concours has become one of the top collector car events in the world. Year after year, the organizers manage to attract some of the leading collectors, top-notch judges, the finest automobiles, and thousands of spectators. The categories are unique, fresh, and well thought out. The location is spacious and relaxing, and the schedule is busy but enjoyable. Being one of the premiere events in the country, the expectations are high, yet they continually are met.
Galleries

Cars of the Cuban Races