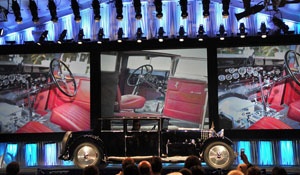 March 2010
Gooding & Company, the internationally-recognized auction house, garnered more than $16.1 Million* in sales, with a total of 58 out of 71 lots sold, at its inaugural Amelia Island Auction on Friday, March 12, 2010 at the Amelia Island Plantation. The auction's top-seller was the star 1931 Voisin Mylord Demi-Berline that sold for $2.75 Million, an outstanding sale and world record for the Best of Show 2009 Amelia Island Concours d'Elegance winner.

'One of my favorite moments at this auction was watching the incredible 1931 Voisin Mylord
Demi-Berline set a world record up on our stage,' says David Gooding, president and founder of Gooding & Company. 'With more than $16.1 Million in total sales this evening and a strong showing by many of our collectors and clients, I am very pleased with the results from our debut Amelia Island Auction.'

Many collectors and enthusiasts from around world attended and expressed their enthusiasm for Gooding & Company's new presence in Florida, eager for the auction house to build Amelia Island into its annual auction calendar as a permanent fixture. The highly espected classic car collector Michael Schudroff stated, 'Gooding & Company did a wonderful job this evening…The presentation and production was high class and a great crowd attended. We definitely look forward to seeing them in Amelia Island next year.'

In addition to the top-selling 1931 Voisin C20 Mylord Demi-Berline, two other cars sold for
more than $1 Million on Friday evening: the 1961 Porsche RS61 at $1.705 Million (Lot 55) and Gooding & Company 2010 Amelia Island Post-Auction Release (Pg. 2) the 1932 Bugatti Type 50 Drop Head Coupe at $1.1 Million (Lot 66). The excitement of Gooding & Company's debut Amelia Island Auction is an outstanding achievement following the success of its last two auctions, which collectively garnered an outstanding $85 Million for 243 collector cars sold at both the 2010 Scottsdale Auction and 2009 Pebble Beach Auction.

Gooding & Company, the official auction house of the Pebble Beach Concours d'Elegance, will
be conducting its annual two-day Pebble Beach Auction on August 14 & 15, 2010. The Saturday
and Sunday evening auctions will commence at 6:00 PM and are located at the Pebble Beach
Equestrian Center.
Galleries
1928-1937