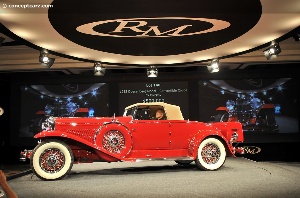 RM Auctions, the official auction house of the Amelia Island Concours d'Elegance, continued its strong track record in Florida this weekend, posting in excess of $19 million in total sales with an impressive 88% sell-through at its 12th annual Automobiles of Amelia Island event.

Returning to the prestigious Ritz-Carlton Hotel, the single-day sale saw 112 cars cross the block before a packed house, with four cars breaking the magic million dollar mark and 15 lots exceeding their pre-sale estimates. The sale once again acted as a prelude to Sunday's world-famous Amelia Island Concours d'Elegance, where RM President and Chief Operating Officer, Ian Kelleher, returned as a judge and RM presented two awards: The RM Restorations Award for the Best Unrestored Car, and The RM Auctions Trophy for the Best Open Car.

'World record prices, standing room only attendance and the most outstanding line-up of cars ever offered at Amelia Island, solidified RM's dominance and long-term standing as the official auction house of the concours weekend. Clients walked away from the auction with a great feeling of confidence as many cars met pre-sale estimates with a number exceeding expectations, illustrating RM's expertise in the collector car market,' he added.

The top-seller was a supremely elegant 1930 Duesenberg Model J Sport Berline from the estate of noted American collector, the late Mr. John O'Quinn. One of 54 examples offered from the collection at this weekend's sale, the stunning ‘Whittell Mistress Car' attracted strong interest on the block, exceeding its pre-sale estimate and selling for an impressive $1,705,000. A second Model J Duesenberg from the collection – a majestic and beautifully restored 1932 Convertible Coupe – realized a final sale price of $825,000.

Beyond the O'Quinn Collection, RM's Amelia Island top-seller's list was dominated by a range of historic Ferraris, continuing the company's reputation as the leader in the presentation of vintage Ferraris at auction. A striking and multi-award winning Fly Yellow 1967 Ferrari 275 GTB/4 Berlinetta, currently featured in Forza Magazine, was another example to well-exceed its pre-sale estimate, selling for $1,650,000, while a superb, alloy-bodied Four-Cam from the same year, finished in Nocciola and offered for the first time in 30 years, brought $1,265,000. Rounding out the million-dollar-plus sales, a 1971 Ferrari 365 GTB/4 Daytona Spyder, certified by Ferrari Classiche and formerly owned by Edsel B. Ford II, achieved $1,017,500.

RM also provided its auction expertise for the offering of a 1961 Austin-Healey 'Sebring Sprite' Vintage Racing Car, donated to the Amelia Island Concours d'Elegance Foundation by long-term supporter and collector Peter McLaughlin, which brought $44,000; and a VIP Weekend at the 2010 Santander British Grand Prix, graciously donated by Daytona 24 Hour winner and GP Driver, Jackie Oliver, which sold for $6,000. Proceeds from both lots benefited the Concours' Foundation.

'The strong results from RM's first two sales of the year provide a positive forecast for the collector car market as we look ahead to the busy spring and summer auction seasons,' added Kelleher.

In addition to RM's annual Meadow Brook and Monterey sales this summer, the company will host two additional sales in June 2010. The first will offer a private collection from the Pate Museum of Transportation near Fort Worth, Texas in early June, closely followed by another private collection sale in Southern California later in the month. Further details on both events, along with results from the Amelia Island sale, will be posted online at www.rmauctions.com.
Galleries
1910-1932