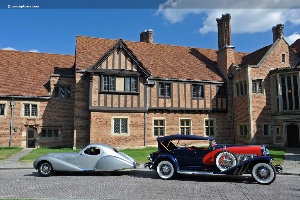 Along with a name change, there was another big announcement. After 31 years of calling the Meadow Brook Hall home, the event will move to a new location for 2011. The Concours' new home is the Inn at St. John's in suburban Plymouth, Michigan, a location that includes a conference center, an 118-room hotel and 27 hole golf course. The hotel room and the conference center were a significant factor in the decision to move. 'As times have changed, the economics of producing an event such as ours necessitates the presence of an on-site hotel with conference facilities specifically designed for large events,' Peter Heydon, the concours chairman, said in a statement.

From the Brass Era to Muscle Cars, the Concours of America encompassed all eras of automobile production, and had a very strong presence of cars built in America, celebrating Michigan's rich automotive history and culture. Except for the 'European Luxury and Sport' and the 'Sports Car' categories, nearly every other group were American-car exclusive.

Just like other concours as well as in past years, there were the classic brass-era cars, the recognized classics based on Classic Car Club of America standard, along with other unexpected displays, such as the A/FX class of drag racing cars of the 1960s. These were defined as 'factory experimental' wild race cars from each of Detroit's big automakers and were raced by famous drivers of their day. The list included the 'Old Reliable', Dick Landy's 1964 Dodge with altered wheelbase precursor to later funny cars, and Gasper 'Gas' Ronda's custom 'Long Nose' Mustang.

Another 'non-traditional' Concours d'Elegance category was the ferocious Muscle Car group. Looking under the hood of these iconic American masterpieces made one re-think the phrase 'beauty is only skin deep' - physical beauty is not always superficial. The judge's favorite in this group was Chevrolet Impala Z-11 Sport Coupe. The car has just 1,080 miles and a distinguished racing career. It was ordered from the factory with the Z-11 package that included aluminum front end and bumpers, and a 427 cid 'Mystery Engine' with special Z-11 heads. It has recently undergone a complete frame-off restoration and is one of the finest examples in existence.

The Space Age Coupe Category was a popular field, featuring cars of the late 1950s and early 1960s that incorporated design elements inspired from 'space-age' styling. These large automobiles were given large tailfins, wide rear decks with 'rocket-pod' tail lamps, rear skirts, and sharp-edged rooflines. The interiors were equally as extreme. The judges selected the Ford Thunderbird owned by James Cappuzzo as the most deserving for the 'Best in Class' award. Cappuzzo's 1963 T-bird is one of only 37 cars produced with the rare 'M' code engine. When new, the car cost a staggering $5,563, a hefty figure in the 1960s.
Perhaps the most anticipated car on the field was the 1955 Chevrolet Biscayne Motorama Car owned by Joe Bortz. The car had just undergone an extensive restoration and was making its restoration debut. The car was rescued from a scrap yard in the late 1980s and at the time, was in very poor shape. It had no powertrain or chassis and was missing many pieces. After years of work and dedication, the car was transformed to its former glory, and made a very special restoration debut at this years event. Three other cars from the Bortz collection were on display, including the 1953 Pontiac Parisienne, the 1954 Pontiac Bonneville Special and the 1953 Buick Wildcat. All were part of the General Motors' Motorama touring exhibitions of the 1950s. 'Any concept car is something special,' says Bortz, 'but the cars from the Motorama shows are the crème de la crème.'

As in years past, selecting the Best-of-the-Best was an extremely difficult decision that required the expertise of judges who had equally impressive talents in the automotive industry. In the European car category, there were two Bugatti Type 57s with one having won Best of Show at Pebble Beach in 1976. These were some of the most beautiful, desirable and advanced of all Bugattis, with Jean Bugatti's lean, sleek, aggressive Atalante coachwork complemented by the low Type 57 surbaisse chassis. Also in the group was a Talbot-Lago T150C with a Teardrop Coupe body, arguably the pinnacle of the French streamlined design movement. Sitting in close proximity was a Voisin C27 Aerosport Coupe which had been on display at the 1935 Geneva Motorshow. Other memorable name-plates from the group included Rolls-Royce, Bentley, and Mercedes-Benz. From this group of paragons, the judges selected the Talbot-Lago from the Off Brothers Collection in Richland, MI as their favorite.

The long list of eligible Packards, Pierce-Arrows, Cadillacs, Lincolns, and Duesenberg stretched from one end of the field to the other. Of the three Duesenbergs in attendance, the judges selected the Phaeton Sweep-Panel Model J owned by John Groendyke of Enid, OK.

Conclusion
There were several days of auto-related events leading up to the concours, which included RM Auctions 16th sales at the event. More than 100 cars crossed the block, with the focus of the sale being on American classics. Total sales surpassed $10 million dollars, with the top-seller being the 1953 Chrysler 'Thomas Special' Coupe, selling for $858,000. Other activities related to the concours included a design forum and a motoring tour.

With a field of over 200 cars along with a range of vintage motorcycles on display, the 2010 Concours d'Elegance of America at Meadow Brook showcased more than 100 years of automotive history. Entries hailed from across 25 states as well as Canada and close to 10,000 automotive enthusiasts were in attendance.

'We were overly pleased with the weekend's event. With cars coming from 25 states, the field represented one of our most diverse showings in history, with some of the greatest automobiles ever built on display,' says Larry Moss, Chairman of the Car Selection Committee, Concours d'Elegance of America at Meadow Brook.

'There was truly something for everyone and all elements came together well to make for a great and memorable day with strong attendance,' Moss adds.
Galleries
Horseless Carriages