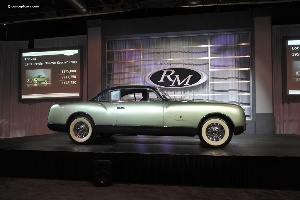 July 2010
Wild weather across the Motor City failed to dampen the enthusiasm of car collectors at RM Auctions' Vintage Motor Cars of Meadow Brook event on July 24, as spirited bidding in the room, on the phone and via the internet saw total sales climb over $10 million for the 98-car offering, with a strong 85% sell-through rate.

Well-attended by motoring enthusiasts from across the continent, the single-day sale was highlighted by an abundance of American classics as it celebrated the Midwest's impact on the automobile. Once again, the auction launched the renowned Meadow Brook vintage car weekend, culminating with yesterday's Concours d'Elegance of America at Meadow Brook event.

'The Meadow Brook weekend is always a favourite on the RM calendar and we were delighted to see such strong interest and enthusiasm from Midwest collectors,' says Ian Kelleher, President and Chief Operating Officer, RM Auctions.

'The outstanding results, including a high sell-through rate, provides a positive forecast for our upcoming Sports & Classics of Monterey auction in August,' Kelleher adds.

Headlining the sale was a unique 1953 Chrysler 'Thomas Special' Coupe with coachwork by Ghia – a Virgil Exner design masterpiece – which sparked lively bidding to well-exceed its pre-sale estimate, selling for $858,000. A trio of vintage Duesenbergs also garnered significant attention from collectors, headlined by the majestic 1929 Duesenberg Model J Convertible Sedan with coachwork by Murphy, which sold for $825,000. The one-off 1932 Duesenberg Model J Torpedo bodied by Rollston also joined the top-seller's list, achieving $726,000, while the very rare 1929 Duesenberg Model A Speedster, the precursor to the Mighty Model J, brought $258,500.

RM also had a strong presence on the show field at yesterday's Concours d'Elegance of America at Meadow Brook, with a number of winning entries having passed through the doors of RM's esteemed restoration division in recent years, including the 1938 Talbot Lago 150-C Teardrop Coupe, which claimed top honors and was judged ‘Best of Show – European'; the 1933 Duesenberg Beverly Sedan by Murphy, which was awarded ‘Most Elegant Car Award'; and the 1930 Stutz SV-16 by Weyman, which received ‘The Art that Moves Us' Award.