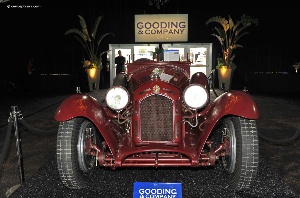 'We went into this year's Pebble Beach Auctions with high expectations because of the sheer number of extraordinary cars we had consigned,' says David Gooding, President and founder of Gooding & Company. 'In addition to a packed auction tent brimming with new guests and enthusiasts from around the world, our highest-ever Pebble Beach weekend results at $64.59 Million speak for themselves and I couldn't be happier.'

Guests at Gooding & Company's exclusive cocktail preview reception were delighted to witness the public North American unveiling of the 2012 McLaren MP4-12C, a fabulous new road-ready supercar that has greatly impressed consumers and sports car fans around the world. Both David Gooding and Antony Sheriff, Managing Director of McLaren Automotive, proudly presented the car.