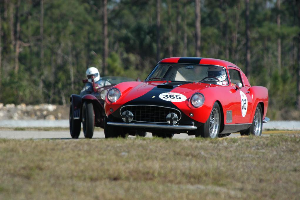 The 14th Annual Palm Beach Cavallino Classic took place mid-January of 2005.
This meeting was a six day convention for Ferrari owners and enthusiasts, with participants and their Ferraris attending from the U.S., Europe and Japan. Activities began with track days at Moroso Motorsports Park, which is located just outside of Palm Beach. Over 100 competition Ferraris revive memories of days gone by, as their owners let them loose again in a race course setting. Ferrari owners were invited to four days of racing and competition. Spectators were invited to two of those days. Mr. Enzo would have been proud. The vehicles he built had one primary purpose: racing. The vehicles he built for the road provided the bread-and-butter. In both endeavors, he was very successful.

There were two groups. Disc and drum. Even though this was an exclusive 'Ferrari' event, Maserati and a few Alfa Romeo's were invited to participate. Maserati's were allowed because of the close ties between the two companies.

Two further classes separated the faster drivers from the slower drivers: there was a GT and Sport class.

The Cavallino Classic Concorso d'Eleganza followed the track days. The event took place at the famous Breakers Resort, one block away from Mr. Trumps (The Donald's) wedding. The Breakers hotel is set amidst 140 acres of oceanfront property and offers an extensive range of services and amenities for the vacationing or business traveler. A dedicated staff of 1800 - with fluency in over 56 languages - provides each guest with an exceptional level of personalized attention. Thus, this was an excellent location for 150 of the finest automobiles ever built. The vehicles were invited to occupy the 10th hole on the Breakers Golf Course, which turned out to be the first (and only) closure of the golf course fairway at the Breakers. The more stunning and alluring vehicles occupied the area closest to the hotel. Many Ferraris at the Concorso were entered for display only, and were not judged. The automobiles were judged by leading experts, and Class Awards and Major Cups were presented, along with The Cavallino Cup for Best in Show.

The results of the judging can be found on the Cavallino's web site located at http://www.cavallino.com/. The Major awards were as follows:

Not only were there Ferraris' of 'yester-years', the event was also privileged of the presence of the new Ferrari F430. Not only was it shown, it was also heard: its engine was started and brought to red-line at several different occasions throughout the day.

In prior years, the Concorso on the Breaker was the final event of the week. This year, however, the final event was the inaugural Palm Beach International Concorso d'Eleganza. According to the event organizer, Andrew Carduner, 'The cars are the stars at the Palm Beach International. The Concorso will feel like an elegant garden party, where spectators and car enthusiasts have the opportunity to see some of the world's rarest and most famous cars.' And Andrew delivered on his promise.

The event took place at the Palm Beach Polo Fields. The featured cars of this event were four cars built by Cunningham.

This event was different from other shows because the owners of the cars were the ones who judged the cars in their class. In most shows the vehicles are judged based on their appearance and history. The public was invited to decide 'best of show.' The Bugatti Type 57C ran away with top honors and was declared 'best of show'.

The week prior to these events was the opening of the Detroit Auto show. After spending time in Detroit at that event (during the winter), Palm Beach was a welcome change. The weather cooperated and only light rain, lasting no-more than a few minutes, was all that endured. The scenery and surrounding complimented the vehicles nicely.
Galleries
Palm Beach Cavallino Classic
The Cavallino Classic Concorso d^Eleganza