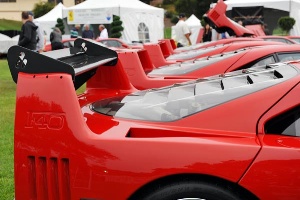 August 2010
This was Concorso Italiano's 25th anniversary, and the second year of their restoration of the Concorso. Building upon last year's success and the positive response of spectators and exhibitions, the event continues to grow by leaps and bounds. At the heart of this success are the special guests, unique cars, and the new venue at the beautiful Laguna Seca Golf Ranch in the Monterey Peninsula.

Two years ago, the venue (an airport runway) proved unimpressive compared to the caliber of the event and the vehicles in attendance. A new, separate event was spawned, but lasted just one year. With Concorso returning to the beautiful manicured lawns of the golf course, with the undulating fairways complementing the beautiful cars, harmony was restored.

This was Concorso's silver anniversary and Alfa Romeo's 100th. As would be expected, the Alfa Romeo gathering was very impressive, with one of the highlights being an 8C 2900B that won the Pebble Beach Concours in 2008. Special guests included Richard Gadeselli, Vice President Communications Fiat Group Automobiles SpA, and Sefano Agazzi, Head of Alfa Romeo's Historic Activity Department and Alfa Romeo Museum Curator. These individuals participated in judging of the Alfas on display, selecting the most historically relevant Alfa Romeo.

This year, Concorso celebrated the second of the Ferrari supercars, the Ferrari F40. This mid-engine, two-door sports coupe was produced from 1987 to 1992 with just 1,315 examples created. They were the successor to the legendary Ferrari 288 GTO (A car celebrated at last years Concorso), and at the time, was the world's fastest street-legal production car. Leonardo Fioravanti, who was the Project Director for the F40, visited the Monterey Bay area and Concorso to help celebrate this years F40 reunion. Sig. Fioravanti, the founder of Fioravanti SRL, has designed more Ferraris than any other person. One of Sig. Fioravanti's most recent Ferrari design is the Ferrari SP1, a one-off creation commissioned by Mr. Junichiro Hiramatsu of Nagoya, Japan. The SP1 is based on the F430, but features unique coach-built bodywork conforming to the owner's specifications. It was the first vehicle produced under Ferrari's Portfolio program, which allows clients to work with design houses to build unique creations. Both Sig. Fioravanti and the SP1 were in attendance at this year's event. The SP1's was rewarded with Best of Show honors, the highest award bestowed upon a vehicle at the event.

The Bizzarrini SpA marque, founded by Giotto Bizzarrini, turns 45 this year. Several of the company's most unique designs were honored at Concorso this year, including the exotic GT Strada 5300. The cars roofline is a mere 43-inches off the ground, and was widely considered as one of the most beautiful designs ever created. Production was brief, beginning in 1965 and concluding in 1969, amassing a total of 80 to 90 examples created. Equally as impressive was the one-off Bizzarrini Manta, created for the 1969 Turin Auto Show and built in just forty days.

Other Italian nameplates, including Lamborghini, Maserati, DeTomaso, and Fiat descended upon the Laguna Seca Golf Ranch making one spectacular traffic jam. Presenting sponsor Fiat even brought a portable cafe and handed out espresso and gelato to attendees. Fiat representatives spent time with the Fiat club, reinforcing their connection with passionate followers. The new Fiat 500, the model intended as their re-entrance into the US market, was on display. With several Fiat 500s from the company's past baking in the warm California sun, it was evident where design inspiration for the new model had come from.

Since everything in life must experience growing pains, Concorso's set-back two years ago is understandable. What is extremely evident is the dedication and effort put into making this event one of the best of its kind. With so many fabulous Italian cars from both past and present, the 25th Anniversary of Concorso was one for the history books.
Galleries
Alfa Romeo
Ferrari