The Quail, A Motorsports Gathering 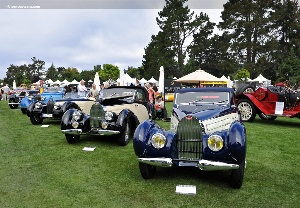 August 2010
The Quail Lodge Resort and Golf Club is located in the heart of the Monterey Peninsula and nestled on 850 aces of lush fairways, oak-studded meadows and scenic, sparkling lakes. With rolling green lawns and rugged mountain peaks, the location offers an incomparable atmosphere of serenity, luxury and exclusivity. For the eighth year in a row it has been home to 'The Quail, A Motorsports Gathering,' an exclusive event that showcases many rare and collectible automobiles, along with a gastronomical feast. A culinary team headed by Executive Chef Julio Ramirez prepared a delightful array of food that spans the globe with offerings from Italy, Germany and France, together with homegrown favorites from central Texas and of course, Carmel Valley. There was an assortment of the best wines and Champagne by Roederer Estate. Their culinary presentation was able to please even the most demanding palate.

The Quail sells a limited number of tickets, allowing for an intimate affair and plenty of room for car connoisseurs to examine and enjoy each vehicle on display. This year's featured themes were Milestone Cars of 1934, 45 Years of the Shelby Mustang, Alfa Romeo Special Coachbuilders, and Nurburgring. As in years past, they continued the tradition of The Great Ferraris along with Pre and Post-War Sports, Pre and Post-War Racing, Sports and Racing Motorcycles and Super Cars, as well as adding a few surprises.

The vehicles on display were an eclectic mix of old and new, encompassing a wide spectrum from road-going cars to racing specials. Modern high-end vehicles, such as Bentley, Bugatti, Ferrari, Land Rover and Porsche were also on display. Porsche brought their new GT3 Hybrid, Ferrari brought a 458 Italia and 599GTO, and Bugatti stole the show by bringing two of their 267 mph Veyron Super Sports.

Carroll Shelby and 45 Years of the Shelby Mustang
The Quail celebrated the '45 Years of the Shelby Mustang' which included an appearance from the legend himself – Carroll Shelby. His work has had an impressive impact on automotive racing and design over the last five decades. During the 1950s he drove for Cad-Allard, Aston Martin, and Maserati teams. He set 16 US and International speed records, driving a supercharged and streamlined Austin-Healy 100S. In 1959, he (along with Roy Salvadori) drove an Aston Martin to victory at the '24 Hours of LeMans.' He raced in eight Formula One World Championship races and several non-championship races between 1958 and 1959. As the 1950s came to an end, so did his racing career. He was forced to retire due to health reasons. With free time on his hands, he opened a high performance driving school and the Shelby-American Company. Later, he imported British Sports cars manufactured by AC Motors of England and installed American Ford power-plants into their engine bay, creating the Shelby Cobra. Additional Ford powered cars with Shelby influence soon followed, including the GT40, the Shelby GT350 and the Shelby GT500. He later worked with other American companies such as Dodge and Oldsmobile, developing performance cars within their divisions. Perhaps the most memorable was the Dodge Viper.

A special section at The Quail was reserved for the Shelby Mustangs, which sat shoulder-to-shoulder with several Cobras and the GT40s. Though Shelby Mustangs are rare, the Quail was able to recruit many of the more unique examples, including one of the eleven cars that were factory-equipped with a Paxton supercharger. Another example on display was the first Shelby GT500KR created, which still retains its original drive train and interior. Sitting in close proximity was one of the four GT350 Drag Cars built in 1966. A modern Shelby Hertz Mustang, which was once part of the LAX airport fleet, was displayed near a few original Hertz Mustangs. Other modern examples included a 2010 Super Snake and a 2011 GT350.

Alfa Romeo Special Coachbuilders
As part of Alfa Romeo's centennial, The Quail displayed a brilliant selection of Alfa Romeo cars that spanned six decades. The earliest car shown was the 6C 1750 Grand Sport with coachwork by Zagato. Another pre-war example was the 6C 2300 wearing one-off Aerospider coachwork. In hopes of building a high-speed racer that could outpace Auto Union and Daimler Benz, the car was a clandestine affair spearheaded by Vittorio Jano, head of development of Alfa Romeo. He was aided by Gino and Oscar Jankovits of Fiume, Italy. Before the work could be completed, Jano was dismissed from his post. The Jankovits converted the Alfa into a sports racing car by mounting a 6C 2300 engine. Post-War cars included a 6C 2500S Bucci Special, a recently restored Touring-bodied 1900 CSS, a Junior Zagato 1600, and a limited production SZ.

The Great Ferraris
One of the best curated classes at The Quail continues to be 'The Great Ferraris.' It is a fitting marque to reinforce the event's name, 'A Motorsports Gathering.' These vehicles were built to be raced at the track, shown at the most prestigious events worldwide, and driven on the road. The list of paragons included the 1958 Ferrari 250 PF Series 1 Cabriolet, which won its class at Pebble Beach and Villa D'Este, and selected as Best 12-Cylinder car at Cavallino. The 1956 Ferrari PF Prototipo was the Geneva Auto Show car of the same year. It is a one-off Prototipo with interesting features that never made it to the production cars. The 1959 Ferrari 400 Super America was one of the highlights at the Torino Show. It has a short-chassis, a coupe body designed by Pininfarina, and a transparent roof panel. The 1956 Europa GT also had a Pininfarina Coupe body and was the last Europa GT built of the 36 delivered by Ferrari from 1954-1956. It was on display at the 1956 Brussels Auto Show and a year later it was used in competition at Spa Francorchamps.

Best of Show
The Quail encourages the preservation of automobiles so that future generations can enjoy them in the state their creators intended. Thus, judging focuses on the quality of design of the vehicle as well as the return to originality of finishes, fabrics and accessories. The criteria used in the judging focus on exceptional design, technical interest and accurate restoration.

Since the entrants are exceptionally knowledgeable about their cars and those within their classes, the entrants themselves select the winning car in their own class. The Best of Show award is then chosen from the list of class winners.

This year, Best of Show went to Ken and Ann Smith's Delahaye 135 Competition Disappearing Top Convertible, a car that was making a second appearance at The Quail (shown in 2006). It is a breathtaking vehicle that was built for competition and for show. In the early 1990s, it was given a no-expense-spared restoration and has subsequently been restored again by the present owners. Both engine and chassis are competition.

Quail Run
During the golden era of road racing, the race cars were driven on the road. Race teams would use space in gas stations and car dealerships in towns surrounding the race track to work on their vehicles at night. In the morning the cars would be driven on the road and to the course, much to the delight of the fans. The Quail continues this tradition with their Quail Run. Each year, a group of racing cars taking part in the Rolex Monterey Motorsports Reunion leaves Mazda Raceway Laguna Sea under escort from the California Highway Patrol Motorcycle division. They are lead over the sinuous open roads, and to The Quail, where they park on the display field. The crews are guests at lunch.

This year, a large group of Pre-War Bugatti Grand Prix cars made the journey from Laguna Seca to The Quail. The sounds of their engine could be heard as they came down Valley Greens Drive, ushering spectators to their feet, many of them interrupting their lunches. A crowd quickly formed along the path the cars take as they enter the field. After enjoying some food and catching up with friends, the drivers returned to their vehicles and made the trek back to the track.

Conclusion
The Quail is one of the most expensive car shows in the country, but it is also one of the most exclusive and desirable events. The 3000 tickets, which sell out in matter of minutes, are priced at $400, and include admission, a program, poster, and 'free' food and drink. In the short eight years of its existence, it has grown into a world-class event that is unique in every detail.
Galleries
Alfa Romeo Special Coachbuilders
The Great Ferraris