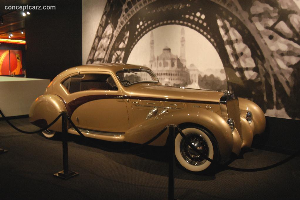 April 2005
The automobile and Los Angeles, inseparable for a century, have been linked together in a historical experience that has led to the creation of one of the world's largest and most innovative automotive museums, Petersen Automotive Museum.

The Museum is located at the corner of Wilshire Boulevard and Fairfax Avenue where 75 years ago the world's first linear shopping district dedicated to the emerging auto age was developed -- the Miracle Mile -- with its wide store windows set close to the sidewalk and street, and large rear entrances to accommodate the traffic.

Experience a 20th Century 'road map' depicting the evolution of a culture that has influenced life throughout Southern California and especially Los Angeles; the only major city that was entirely shaped by the automobile. Three floors of automotive history take the visitor through time and traces the automobile's influence on the culture of Los Angeles.

The first floor follows the history of the automobile with lifelike dioramas and settings, allowing visitors to experience the automobile as it relates to everyday life.

The May Family Children's Discovery Center is located on the third floor. Designed to spark children's interest in science by way of the automobile, the 6,500 square-foot, 'hands-on' learning center teaches basic scientific principles using the fundamental elements of a car.

A dazzling all-glass penthouse conference center and Founder's Lounge constitute the fourth floor which is available for corporate or private functions.

The 'French Curves' was a display focusing on on French aerodynamic vehicles produced between 1930 and 1939, featuring some of historys greatest streamlined vehicles ever built. The inspiration for these vehicles came from the avaition industry and the bullet-shaped, wind-defiant race cars of their time. Even at a stand-still, the tear-drop design gives the illusion that the vehicles are in motion. Their design increased the overall fuel-efficiency of the vehicle, enhanced the performance and handling, and propelling them years into the future.

The collection also features work by some of the most famous coachbuilders of their era, including Figoni, Falaschi, Vanvooren, and Pourtout.

Hollywood And The Car

The capital of both car consumption and movie production, Los Angeles has witnessed the potent relationship between these two forms of expression. Both cars and movies combine art, technology, and image making. Both revolutionized how people spent their leisure time. And both represented a mixture of glamour and mechanical convenience to the American public. The Petersen Automotive Museum Hollywood Gallery presents an array of vehicles that illustrate how cars were used on screen, how they played an essential part in the opulent Hollywood lifestyle, and how they helped put the 'motion' in motion pictures.

Cars of the Stars

A Decade of Collecting