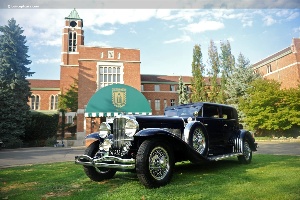 September 2010
The Sixteenth Annual Glenmoor Gathering of Significant Automobiles in Jackson Township, Ohio, celebrated the Duesenberg Company, the Cars of Italian designer Giotto Bizzarrini, and the Historic Motorcars of Cleveland. Visitors were treated to more than 200 vehicles in a wide array of vintages and styles, organized in nearly 2 dozen categories.

The Jack Nicklaus designed Signature Golf Course and the brick clubhouse in the background adds to the ambiance of this exclusive event. Inside the clubhouse, there are high vaulted ceilings, ornate windows, Gothic styling, and a ballroom that can accommodate 350 guests. The location is tranquil with plenty of room to house the vintage masterpieces. As guests arrived at the event, they were welcomed by a modern supercar display with such household names as Saleen, Lotus, Tesla, Ferrari, and Lamborghini.

The Classes
With nearly two dozen organized classes and 200+ vehicles on display, the Glenmoor Gathering had plenty of vehicles to admire.

The American Muscle category was a very well curated group, with several significant examples on exhibit. Included in this group was a 1969 Corvette ZL1, one of only two ever built. The engine option alone cost the original buyer an additional $4700. The ZL1 motor incorporated a specially reinforced all-aluminum 427 block and heads, with a radical solid lifter cam and a Holley four-barrel 'double pumper' carburetor. These cars were rumored to have 700 hp. Sitting in close proximity was another 427 Ford V8, housed in the 1964 Ford Thunderbolt. It was the first Ford 'Thunderbolt' produced, and it was built specifically for drag racing. In recent years it was prominently displayed at the Ford Motor Company 100th anniversary celebration at Ford World Headquarters as well as by Ford Motor Company at the 2009 Specialty Equipment Manufacturers Association (SEMA) show. Also on display was a Dodge Coronet, powered by the legendary 426 cubic-inch V8 powerplant. This was the last of the altered wheelbase cars that participated in the 1970 Indianapolis Nationals.

The Woodie and MicroCar categories had some great examples. Most Woodies were produced in the 1940s, so styling from one car to another is not too drastic. There was a nice mix of station wagons, convertibles, and sedans in this group. Microcars are generally odd, because of their nature. They were meant to be as small and lightweight as possible, and designers did all that they could to cheat wind, increase occupant practicality, and figure out how to house the mechanical components. Vehicles from this group included a Crosley, Simca, BMW Isetta, Nash Metropolitan, and a Fiat Shellette. The Shellette had a wicker interior, including the seats and the dashboard. The Simca Weekend Convertible is a hand-built alloy and steel prototype that was presented to French film actress Bridgette Bardot. The Crosley Liberty was the only pre-World War Crosley built with an all-steel top.

The 'European Post-War Touring' group was eclectic, housing a Citroen SM and an Armstrong Siddeley. Both of these vehicles have unique designs (perhaps controversial), and in the States, are very rare and seldom seen. Sitting beside the Citroen on the show field was a Rolls-Royce Silver Cloud II, one of the most elegant vehicles in attendance. The final touring car was a BMW 2002. Though none of these cars had similar status or design, they had a common purpose - Touring. The 'One-of-a-Kind Wonders' was a similar category, where it would have been difficult to determine the organizers' reason for grouping these cars together, had it not been clearly labeled. The one-offs included the Ed Williams Speedster, two Studebaker Avanti Prototypes, and the sensational DeSoto Adventurer II Concept by Ghia.

Cars of Giotto Bizzarrini
One of the most exotic vehicles in attendance was the Iso Rivolta Varedo. In the early 1970s, the company decided to build a mid-engined supercar to complement their involvement with Formula One. The car, named the Iso Rivolta Varedo, was given a fiberglass body and powered by a Ford 351 cubic-inch engine mated to a ZF 5-speed gearbox. Shortly after the project was completed, the Rivolta sold its interest in the company, and the project died without ever becoming a production model.

Another exotic supercar was the Bizzarrini 5300 SI Spyder. It is one of only three examples to be fitted with the Spyder body. Mounted mid-ship is a Chevy V8 engine fitted with four Weber 45 DCOE carburetors, offering an impressive 350 horsepower.

Iso produced fewer than 200 examples of the Iso Fidia (S4). The marketing material for this car claimed it to be 'the world's fastest four-seater' as well as 'the world's most exotic four-seater.' The S4 at Glenmoor was the earliest known example.

Cars of Cleveland
Cleveland, Ohio was once a rival to Detroit as a center for automoible manufacturing. Among the Cleveland-built cars displayed at Glenmoor were the Peerless, White, Winton, Stearns-Knight, Templar, Rollin, and Jordan.

Alexander Winton was unquestionably one of the individuals - quite possibly the individual - who launched the American automobile industry. And he did it in Cleveland, Ohio. One of the most famous cars built in that city, the car was in production from 1897 until 1924.

One of the storied automobiles built in Cleveland, Ohio was the Templar, which was in production from 1917 to 1924. The Templar was what was known in the automotive trade as a high quality 'small car.' The name came from the military-religious order famous during the crusades of the middle ages.

The Rollin was a short-lived automobile built for only two years - 1924-25. It was named after Rollin White, who had left his job as chief engineer of the White Company in 1914 to design and built tractors (what became the Cletac tractor).

Peerless was in production from 1900 until 1931. Their cars were well received and production expanded rapidly. Soon the company had migrated into the high-price market. By 1903, they were manufacturing the most costly automobiles in America.

The F.B. Stearns Company built automobiles in Cleveland for 30 years - from 1900 until 1929. The automobiles were originally sold as Stearns automobiles but adopted the Stearns-Knight name in 1912, when they switched to the innovative Knight sleeve-valve motor for all cars.

One of the most unusual automobiles built in Cleveland was this Owen Magnetic. Production began in New York in 1915 and shifted to Cleveland from 1916-1919 and concluded in Wilkes Barre, Pennsylvania in 1920-21.

Best of Show
The Glenmoor Gathering had a Duesenberg Category, and this was the obvious choice to house the Best of Show. Since there were only 45 Duesenbergs produced with a factory-installed supercharger, the sole Model SJ in attendance was the logical choice for Best of the Best. Another potential Duesenberg candidate was the long wheelbase Convertible Sedan Berline with coachwork by Murphy. It was finished in an eye-catching red paint scheme with interesting chrome work throughout the exterior. Original accessories included the external exhaust pipes, dual Pilot Ray lights, and a trunk rack and trunk.

A Mercedes-Benz 540K and a Delage D8-85 were both suitable contenders. Though elegant, neither could compete with the horsepower or wheelbase size of the Duesenberg.

There were hopes that the judges might select an unconventional choice - a Post-War contender: the DeSoto Adventurer II Concept. The Adventurer II was commissioned by Chrysler and designed by Ghia, by Luigi Segre, and Giovanni Savonuzzi for the European car show circuit. It is powered by a Hemi V8, has a retractable rear window, as well as fitted luggage. It was one of the most attractive vehicles of the day.

After careful deliberation, the judges selected the Duesenberg SJ Beverly Berline with coachwork by Murphy as their favorite and the most elegant vehicle on the show field.
Galleries
1919 And Earlier
1920-1931