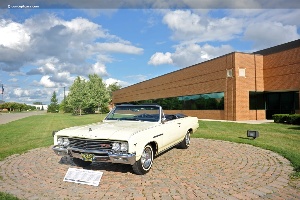 November 2010
The GM Heritage Center serves as a showplace for the vehicles of the GM Heritage Collection, and as the home of the Heritage and Media Archive. Located in an 81,000 square foot facility in Sterling Heights, Michigan, the Center has approximately 200 vehicles on display, while the Archive houses 15,000 linear feet of shelving containing significant documents, manuals, brochures, and artifacts documenting GM's rich history of innovation.

The GM North American Heritage Collection is made up of approximately 600 cars and trucks. Many reflect GM's industry firsts, like the first electric self-starter, used on the 1912 Cadillac, the first production V8 that powered the 1915 Cadillac, and the first air bag, found on 1974 Buick, Cadillac, and Oldsmobile models. Others are technological experiments like the first American gas turbine-powered car, Firebird 1, or the world's first hydrogen fuel cell-powered vehicle, the 1966 Electro-van.

Concept cars and special-interest styling/performance one-offs are part of the mix, along with significant race cars and milestone production vehicles such as the first production 1966 Olds Toronado featuring General Motors' front-wheel drive.

The GM Heritage Collection is ever-changing. New vehicles are constantly being obtained to fully represent GM's product story of the past 100+ years.

The GM Heritage Center is home to hundreds of the world's most significant cars and trucks. It also houses a massive collection of archived documents, artifacts and assorted automobilia. From original brochures, manuals and build sheets, to rare examples of badging and signage, this unique and growing repository reflects the historical accomplishments upon which GM is building its future.

Some of these items come directly from GM facilities. Others are donated by individuals, including many former GM employees, whose personal collections contain items of significant corporate historical value. We welcome these additions to GM's permanent historical record.

This collection is part of GM's Global Media Archive, which houses millions of original photographs, thousands of motion picture films and video masters from around the world.

These one-of-a-kind visual works chronicle the people of GM and their contributions, documenting the workforce, fashion, culture, and events of the day. Nearly every vehicle that was designed, prototyped, or marketed by GM is likely to be found in this Archive.