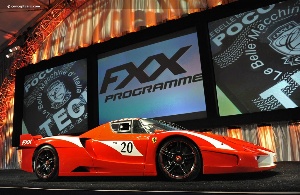 February 2011
Renowned for selling the most valuable car of Scottsdale Auction Week for the last four years, Gooding & Company continues to lead the high-end collector car market with $34.98 Million in total sales by presenting the best examples to its international audience of collectors and enthusiasts and achieving top sales across all categories of marques and models. Of the 129 lots presented over both Friday and Saturday's auctions, 121 lots sold resulting in a strong 94% sales rate and an average price paid per lot of $289,000.

An extraordinary feat when presenting both Reserve and No Reserve consignments, Gooding & Company sold 100% of its 72 lots at its Saturday auction - a first for the auction house. Charged with electricity and optimism, Gooding & Company's glamorous tents were lively throughout the week and yet the culminating moment arrived when thousands of enthusiastic guests rose out of their seats to applaud the talented and comedic Auctioneer Charlie Ross in a standing ovation for his incredible performance and auction narration.

What has become one of the most highly anticipated events of Scottsdale Auction Week, Gooding & Company's annual Friday and Saturday auctions reached new heights this year, not only because its total sales outperformed all previous years in its Arizona history, but also because many of the lots trumped all category comparisons, setting new market precedents.

Gooding & Company's top ten automobiles sold at Friday and Saturday's Scottsdale auctions are listed below in order of value: