Automobiles of Arizona by RM Auctions 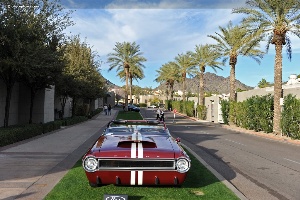 January 2011
RM Auctions, the world's largest collector car auction house, enjoyed a strong start to its 2011 auction season this week, posting a record $30.8 million in sales at its annual Arizona event, with an impressive 96% of lots sold and four automobiles exceeding the magic million dollar mark.

Illustrating RM's global clientele, bidders represented 21 countries from around the world, including as far away as Argentina, the United Arab Emirates, Monaco and Australia.

'We are thrilled with the results from this week's Arizona sale. The offering attracted strong interest from collectors around the globe, with numerous lots exceeding expectations,' says Rob Myers, Chairman and Founder, RM Auctions. 'It is a great start to the New Year and paints a very positive forecast for the auction season ahead.'

Following the success of last year's ‘The British Are Coming', RM's 2011 Arizona sale kicked off on Thursday, January 20 with ‘The British Are Back' – an exclusive evening sale dedicated to the best of the British. Rolls-Royce claimed the top two sales of the night with a handsome 1932 Rolls-Royce Phantom II Newmarket Sport Sedan, one of just three original Brewster-bodied examples, bringing $440,000, while an extravagant 1921 Rolls-Royce 40/50 HP Silver Ghost Phaeton, built for the Calcutta Motor Show, realized $379,500. Rounding out the top three sales from the evening, a 1963 Aston Martin DB4 Series IV Vantage exceeded its pre-sale estimate, selling for $352,000.

Friday's top-sellers list was dominated by an exciting series of Ferraris and the ‘best of the best' of the Classic Era. Continuing RM's reputation as the global leader in the presentation of important and historic Ferraris at auction, the sale featured no less than 11 examples from the Modenese Prancing Horse. Led by the sale-topping 166 MM Barchetta, other highlights included a stunning 1965 Ferrari 500 Superfast, one of just 32 built, for $935,000; a 1973 Ferrari 365 GTB/4 Daytona Spyder, offered from the personal collection of Baseball Hall of Famer Reggie Jackson, for $880,000; and the ex-Jacques Swaters 1995 Ferrari F50 Show Car, showing less than 1,000 miles, for $742,500.

The American Classics category was headlined by a rare 1933 Packard Twelve Sport Phaeton by Dietrich which realized $1,760,000, closely followed by a 1929 Duesenberg Model J Dual Cowl Phaeton driven by Elvis Presley in the film ‘Spinout' for $1,237,500. The sale's cover car - a spectacular 1931 Marmon Sixteen Coupe, one of only six survivors – also attracted spirited bidding, achieving $687,500 to set a new price level for Marmons.