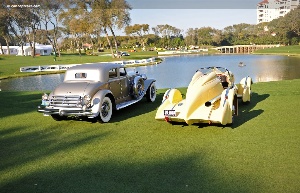 March 2011
The 16th annual Amelia Island Concours d'Elegance proved once again to be one of the top collector car events in the world, drawing nearly 20,000 enthusiasts to view a spectacular collection of nearly 300 rare automobiles and motorcycles. The event was held at the 5-Star Ritz-Carlton Resort on the 10th and 18th fairways of the golf course. This year's featured marques were the legendary Duesenbergs and the cars of Frank Kurtis and Sydney Allard. Hot rods that graced Hot Rod magazine's cover were on display, as were the great cars of the Indy 500 in honor of its centennial. The show honored Bobby Rahal, winner of the 1986 Indy 500, 1981 24 Hours of Daytona, 1987 12 Hours of Sebring and three CART championships.

Duesenbergs
There have been several other Duesenberg gatherings at other events in recent years, but the quality and quantity at Amelia Island was arguably the best. Not surprisingly, two Duesenbergs were named Best in Show, with the 1933 SJN Arlington Torpedo Sedan from the Nethercutt Collection earning the 'Concours d'Elegance' award. The 'Mormon Meteor' owned by Harry Yeaggy won the 'Concours de Sport.' This was the Meteor's third appearance at Amelia in 15 years and its first showing since a major restoration. It was once dubbed the 'fastest, most powerful car in the world.' Many consider it the ultimate Duesenberg, and its accomplishments and major awards have reinforced this belief.

The 'Concours d'Elegance' winning car is widely known as 'Twenty Grand', reflecting its 1932 selling price. This supercharged Duesenberg was designed by Gordon Buehrig as a show car for the Chicago Century of Progress Exposition of 1933-1934. This graceful one-off closed-coupled design is considered by many to be one of the most beautiful Duesenbergs built, and apparently the Amelia Island Concours' judges agree.

'I don't recall a tougher decision among the judging committee for best in show awards than this year,' said Bill Warner, founder and chairman of the Amelia Island Concours. 'We simply had the best of the best on the field and I am glad the decision wasn't mine. Both winners were stunning and very deserving. I take my hat off to the committee and congratulate them on their choices.'

There were four dedicated categories for Duesenbergs that included 'Open,' 'Closed,' 'Supercharged,' and 'Race.' The 'Race' category housed a 1915 Indy Racer, the second oldest Duesenberg in existence. The 1921 Duesy GP car was one of three cars that were entered in the Grand Prix at LeMans in 1921. One of the Duesenberg Racers emerged victorious. This would be the last international race victory for America until 1966.

Amelia's 'Duesenberg-Supercharged' was home to some of the most elegant road-going vehicles ever created. Along with the Model J and the supercharged version 'SJ' (of which there were less than 40 examples produced), Duesenberg also offered the 'JN' Series. This series was introduced in 1935 as a contemporary series of Duesenbergs featuring a wider body dropped over the frame rails for a lower profile. They were designed by Herb Newport of Rollston and Company of New York. Supercharged examples were given the designation 'SJN.' Along with the 'Best of Show' model, another Rollston-bodied SJN was in attendance.

Other highlights included a 'super-short' 125-inch SSJ Speedster and a very late model (1940) Model SJ. Duesenberg had gone out of production in 1937, yet a wealthy individual commissioned one to be built, using a demonstration chassis that wore a LeBaron body. Modifications were made to the chassis and a Fully Collapsible Town Car body was created by Rollson.

Randomness
The Amelia Island Concours is a very thorough, complete, and well curated event. There are horseless carriages and brass era cars, elegant classic era vehicles, flamboyant tail fin cars from the 1950s, GT and sports cars, and high powered race cars. Cars are arranged by group, with several of the groups recurring from year to year. There are other groups that without knowing the group name, appear to be random. For example, the group housing the GM Biscayne Concept, Maserati Sebring Prototype, Ferrari 365 Daytona, Allard Palm Beach Roadster, and Dodge Daytona was very puzzling - until learning that this category was for 'Cars of Florida.' The other unusual category had a Tucker, a replica Bugatti 57SC Atlantic, a modern LaSalle C-Hawk Concept, a Sorrell-Manning Special, and several other 'obscure' vehicles. These vehicles made up the 'One Man's Dream' category, celebrating the creativity and work of low-production artisans throughout the years. These are the groups that help make Amelia Island great, unique, and special. It must not only be difficult to think-up these categories, but also to find worthy examples that can tell the story and meet the caliber of quality on the show field.

Racing
Racing has always been an integral part of the Amelia Island Concours, and this year was no different. The Indy 500 category was exceptional, housing ten vehicles that ranged in years from the late 1910s through the 1980s. It included an early front-wheel drive Miller, a 1930 4WD six-cylinder supercharged futuristic racing special, a 1950 Kurtis Cummins Diesel Special, a Gas-Turbine Lotus, and a Lighting Indy car that carried the first woman to qualify for the Indianapolis 500. Not only are the cars rare, but they are among the most unique and creative that have ever attempted a victory at the Brickyard. The 'Cars of Bobby Rahal' category visually portrayed the many different types of cars Mr. Rahal used during his career. During his career, he won the Indy 500, 24 CART Indycar races and was three-time champion of that series. He raced for 25 years in many different kinds of formula cars, including Formula Atlantic, 3, 2 and I, as well as sports cars in SCCA and IMSA, including Can-Am and LeMans machinery. He even once drove in NASCAR. Cars on the well-manicured lawn at Amelia included a Lola T290, a March 82G and Porsche 962, an open-wheeled Lola T360 and a March 86C. The 1998 Reyanrd on display was Bobby's 'last ride' and is currently in as-raced condition, including the Ford-Cosworth V8 engine used in that event.

It would be difficult to celebrate the many accomplishments of Frank Kurtis or Sydney Allard, without having separate categories for their road-going and track successes. Both of these individuals, judging from their style, creativity, and mechanical abilities, must have been 'cut from the same stock.' Honoring both of these individuals at the same time and having the vehicles they created in close proximity was simply brilliant. It allowed for special admiration and reflection of these two artisans. Their work made a lasting impression on America in the post-War period and both created machines that excelled in their respective branches of racing.

This year's concours also celebrated the work of Jack Griffith. He is one of the few individuals still living who has successfully created and marketed a vehicle bearing his name. On display were examples of his Series 200 and Series 400 vehicles, plus a very rare Griffith 600. The Series 600 was the final model produced by Griffith Motorcars and is one of (at most) 10 examples produced.

Concepts
Among the plethora of unique and one-off creations that were scattered throughout the show field, was a special category honoring 'Orphan Concepts.' An 'Orphan Car' generally applies to any motor vehicle built by a manufacturer that is no longer in business. Examples in the 'Orphan Concept' group included a Mercury Monterey XM-800 Concept. (Yes, Mercury is no longer an automaker), the Plymouth Belmont Concept, Plymouth XNR Concept, Plymouth Explorer Concept, and the Packard Panther Concept. Perhaps the most exciting, futuristic and unrealistic example was the XNR Concept designed by Virgil Exner and built in 1959 by Ghia. It is just 43-inches tall to the top of the fin and has a wheelbase that measures a mere 106-inches. The driver sits behind a dramatically curved 'personal' windshield; a smaller, fold-down windscreen was available for the protection of a passenger. Additionally, the passenger sat somewhat lower than the driver - a design thought to minimize the negative effects of the wind. The concept never made it to market, and if it had - it certainly would have been dramatically modified to make it suitable for practical production.

In Conclusion
It would appear that instead of waiting for special anniversaries (i.e. 15, 20, 25 years) to showcase such an exceptional and 'over-the-top' show, chairman Bill Warner and his group just plan to out-do each show year-after-year. Each year we wonder how they will top the prior year's performance, and each year we are amazed at the creativity, planning, and caliber that they bring to-the-table. It is truly one of the top collector car events in the world.
Galleries
Duesenberg-Closed